Our countdown of all 90 players on the Seahawks roster entering training camp continues with players rated 75-61.

It’s worth remembering that there could be up to 16 practice squad spots this year to add depth as COVID-19 insurance, which, along with the usual 53-man roster, means that up to 69 of the players on this list could be Seahawks in one form or another when the season begins.

Meaning, it doesn’t take long to go down this list before you reach players you could well see on the field at some point in 2020. 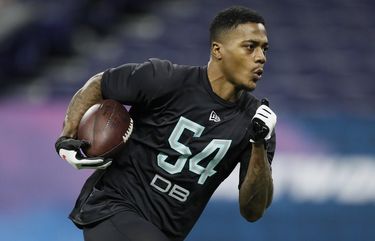 Why he’s ranked here: Thompson was on Seattle’s practice squad much of last season as a rookie, so the team is familiar with him. At Toledo, he was named to The Athletic reporter Bruce Feldman’s “Freaks List” due to a 37-inch vertical leap and 350-pound bench press.

Why he’s ranked here: An undrafted rookie free agent from Florida International, Jones rushed for 867 yards and nine touchdowns as a senior last season. Seattle figures to keep at least one running back on the practice squad, and Jones or fellow free agent running back Patrick Carr could get a spot.

Why he’s ranked here: The fourth-year player out of Utah spent most of last season on Seattle’s practice squad, which gives him a heads-up on some of the younger players. He has played in 16 games for the Steelers, mostly on special teams, and at 6 feet 3 inches, 215 pounds has the kind of size that Seattle always finds intriguing in corners.

Why he’s ranked here: The 6-foot-3, 295-pounder from Iowa projects to be able to play either defensive tackle spot, as well as maybe strongside end. The Seahawks always seem to have an undrafted free agent who makes a run at a roster spot up front (think Poona Ford, Bryan Mone the past two years), so maybe Lattimore could be the next.

Why he’s ranked here: Smith had an eye-popping 30 sacks in his career at Northern Illinois and was a Steelers sixth-round pick in 2019 before they waived him and Seattle signed him to its practice squad late last year. No matter where you get them, that’s a lot of sacks, and the Seahawks will look during camp to see if Smith can be a legit NFL pass rusher.

Why he’s ranked here: The former Husky is one of two Seahawks rookie undrafted free agent receivers and one of their four rookie receivers overall. His chance to stand out from the crowd will come in the return game — he had 48 punt returns at UW for 390 yards and a touchdown.

Why he’s ranked here: Hart was something of a breakout player at the 2019 Senior Bowl before going undrafted and going to camp with the Colts, where he was eventually waived as injured. He then signed with Seattle’s practice squad in October. He’s listed at 5 feet 8 inches, 182 pounds, so he’ll have to make his noise in the slot. Regarded as particularly good after the catch.

Why he’s ranked here: Ellerbee played in three games for the Seahawks on special teams in 2018 before missing last year with a knee injury. Draft picks the last two years have added a lot of depth to the linebacking corps, so Ellerbee may have a tough road to make it.

Why he’s ranked here: Fuller was actually on the roster for the playoff loss to Green Bay to add depth at guard and center. His ability to play center (his primary position at Baylor) gives him at least a fighting chance to stick given the uncertainty at that spot.

Why he’s ranked here: Stephens was on Seattle’s practice squad most of last year before signing with Miami late in the year and playing in three games. He’s now back and is an intriguing name to watch because he’ll be tried at the nickel spot, which is far from settled.

Why he’s ranked here: This may be too low for Gordon considering we can’t rule out Seattle keeping all three of its QBs on the 53-man this year to assure the proper depth in a year unlike any other. But even if Gordon doesn’t make it initially, the Seahawks would likely keep him on the practice squad. The possibility of no preseason games, though, could make guessing which players will get through waivers trickier than ever. For that reason, Gordon could just make the 53 right out of the gate.

Why he’s ranked here: The seventh-round pick out of LSU is listed as a receiver but figures to be tried first at tight end, the position he played primarily down the stretch last season. He’s an intriguing prospect, and Seattle will undoubtedly want to keep him on the practice squad, at the least. But the depth at both receiver and tight end mean that making the initial roster might be difficult.

Why he’s ranked here: The Seahawks list Neal as a cornerback, but he is more accurately a potential backup safety/special teamer. Neal played 38 snaps on special teams for Seattle in the regular season last year and 26 more in the playoffs (though none on defense). If he makes the roster again, special teams will be why.

Why he’s ranked here: A sixth-round pick out of Florida, Swain figures to compete with John Ursua to make the roster as a backup slot — or maybe play well enough to compel the Seahawks to keep both, though the depth at tight end might mean Seattle would keep only five receivers, which might then force an Ursua-or-Swain decision for a final spot.

Why he’s ranked here: Roos has hung around on and off the practice squad for three years now, playing in 14 games, seven last season. And with the changes to the practice squad, he could easily hang around for another year. But with the added depth on the line it won’t be easy.