GLENDALE, Ariz. — Admit it — there has been a little bit of hesitancy to go all-in on this Seahawks team, unforeseen success notwithstanding. It’s been hard to reconcile what we’ve all been seeing with our eyes with the meager expectations heading into this season. Surely, it must be a mirage, a false positive, a tease.

But with each victory, like Sunday’s 31-21 triumph over the Arizona Cardinals, it’s getting harder and harder to conjure up cautionary warnings. The only reason to do so now is either an inherent sense of pessimism or a stubborn need to cling to what clearly were inaccurate projections.

So I’ll just come out and say it, speaking purely for myself but perhaps reflecting the thoughts of many others: I was officially wrong in my evaluation of the Seahawks’ potential this year. It seemed limited, at best. Now it seems limitless, with such steady growth on both sides of the ball that it’s hard to dispute the assessment of Geno Smith after Seattle’s fourth straight double-digit win: “I think we’re just continuing to scratch the surface of what we can be.” 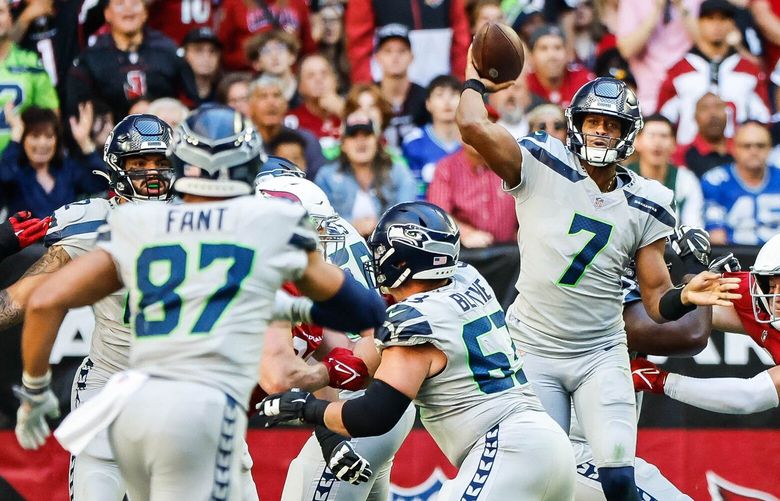 Ah, Geno Smith, who tops the list of stunning Seahawk surprises this year that are fueling their emergence. In some ways, Sunday was his finest hour, even though it contained his lowest moment of the season: An ill-advised pass in the third quarter that was snared by Arizona linebacker Zaven Collins and turned into a 30-yard pick-six that gave the Cardinals a 14-10 lead.

Rather than brood, Smith came back and led three straight long scoring drives that clamped down the Seahawks’ victory and kept them atop the division. Seattle converted seven straight third downs to close out the win — one on a nifty 18-yard run by Smith. Seahawks coach Pete Carroll could hardly contain his satisfaction with what he called his favorite Seattle finish of the season, because it was predicated on shutdown defense and the bruising running game of rookie Kenneth Walker III to run out the clock.

“We finished the game the way we dream of finishing it,” Carroll said, dreamily. “That’s the whole shooting match, guys. When I talk about running football, I’m not talking about running the football in the first quarter, the second quarter. That’s not really what it is. It’s so that you have it to win football games. That’s where you can really play championship football, when you can complete the opportunity. And that’s what you saw today.”

What the Seahawks are doing right now as the NFL’s surprise team is no illusion, no fluke, no smoke-and-mirror show. It’s a feel-good story that feels real. That’s four straight strong games from a resurgent defense, which registered five sacks and has 19 of them during their winning streak, tied with the Patriots for the most in the NFL over that stretch. The offense, which scored at least 27 points for the fifth time in six games, featured six receivers with at least three catches and 20 yards, plus a running back in Walker who has been a revelation. Walker was over 100 yards and had two fourth-quarter touchdowns.

“I mean, for him to be a rookie …” marveled Smith. “Those are the things that the best backs in this league do. And he’s so tough. He’s so good. He’s only scratching the surface. I can’t wait to see how he continues to grow because right now he’s leading this offense.”

One can sense the Seahawks’ belief and confidence growing each week, with each victory. And also bubbling to the surface is the sense of satisfaction that comes with disproving a whole body of thought that predicted the Seahawks’ demise, particularly after the trade of Russell Wilson.

“I think a lot of people are definitely backing off on their words,” said linebacker Bruce Irvin, who had his first sack in three years in his first game since officially being placed on Seattle’s 53-man roster. “I know before I was here that a lot of people said it was a rebuild year. This don’t look like no rebuild year. It looks like a reload year. We just reloaded, and we’re about to ride this thing out ‘til we can’t no more.”

“I mean, everybody wrote us off,” added safety Ryan Neal, who forced a crucial first-half fumble by Kyler Murray that thwarted an Arizona drive. “And when everybody writes you off, you just kind of turn to look at each other and go, ‘Well, they don’t care. So what are we gonna do about it?’ And at the end of the day, you just draw closer to each other because that’s all you have.”

The Seahawks steadfastly claim that they believed in the upside of this team from OTAs on forward. But just in case, Carroll wants them to absorb and internalize what they are accomplishing.

“We can see it,” Carroll said. “There’s no denying it. We can see that we are capable of playing good ball. And I want them to know. I want them to see that. I’m not afraid to talk about it, to show them what they’re capable of doing so that we keep setting and extending our expectations.”

Consider my expectations extended. It’s the only prudent thing to do. Let Irvin, the recently reacquired veteran of two Seahawks’ Super Bowl teams — one triumphant, the other suffering a brutal loss in the very same stadium where they won on Sunday — take it from here. No eye rolls allowed, though I suspect that admonition is no longer necessary.

“This team can go far,” he said. “It reminds me a lot of 2012, my rookie year (when the Seahawks suffered a last-second loss to Atlanta to keep them out of the NFC title game). To me, that was a Super Bowl team. We just fell short, but this team has a lot of the same juice going on around here as 2012, for sure.”

Maybe it’s time for the outside world to take a swig of that juice.