INDIANAPOLIS — It’s the Seahawks’ way to listen to any trade offers they get, even for a player as seemingly untouchable as quarterback Russell Wilson.

The statement given by Carroll during a session with local reporters at the NFL combine Wednesday was maybe the clearest one yet by the team that Wilson will play the 2022 season with the Seahawks despite rumors that persist about his future.

And that statement also jibes with the conventional wisdom that things are far quieter behind the scenes with Wilson this year than last season, when talk of Wilson’s status dominated the NFL offseason. 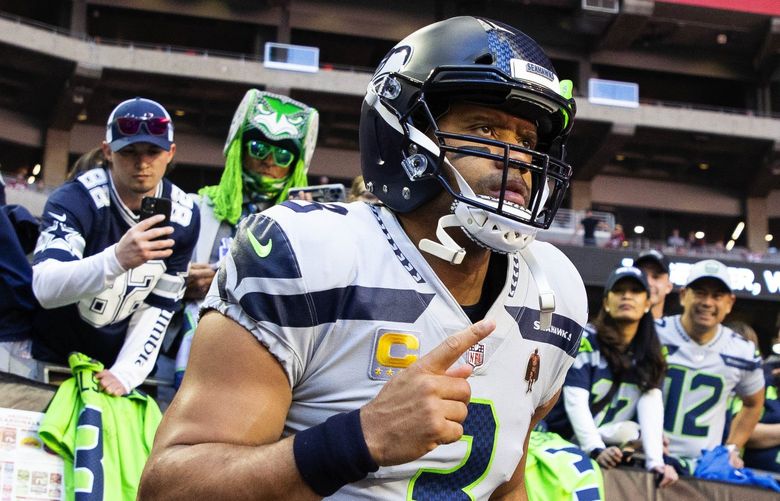 That Carroll is returning for a 13th season, one in which he will turn 71 in September, speaks to the team’s desire to run it back with as much of its current personnel as possible and return to the playoffs after a 7-10 season that was the first losing record since 2011 — and belief that it can do so — with no desire to unload Wilson and start a rebuild.

Asked what Schneider tells teams when they call, Carroll said, “What John says is ‘we are not shopping the quarterback.’ That’s what he tells them. He has talked to other teams. Because of all the media (rumors), they (other teams) think that something is going on. He’s fielded a lot of calls. But he’s fielded a lot of calls on everybody. But that one in particular, he’s got a pretty standard response.”

Carroll gave a similar answer when asked during his scheduled appearance at the podium about if the team has been getting calls about Wilson.

“At this time of year, there are conversations about everybody,” Carroll said. “We talk about everybody and it’s commonplace to have conversations with other teams about all of the players, particularly marquee players, and that’s not changed. It’s been the same every year we have been here, so it’s the same as it’s been. We have no intention of making a move there. But the conversations, John has to field those. He always has. But nothing specific to talk (on Wilson).”

In a later session with local reporters, Schneider confirmed Carroll’s claim that as of now, Wilson is off-limits.

“I wouldn’t be doing my job if I didn’t listen to it, if I just blew people off,” Schneider said, when asked if there is any substance to any of the trade rumors that have circulated. “But to this point, no.

“… When people talk about Russ, the guy’s an amazing player; he’s our franchise quarterback; he’s an amazing person; he does amazing things in the city of Seattle,” Schneider said. “So when it’s out there in the media and all that, of course if I was with another team I’d call and be like, ‘Hey, what’s up with Russell Wilson?’ Just because you field those calls and questions doesn’t mean we are out there actively shopping him.”

One reason to field those calls is to get a sense of what teams will be willing to offer, as well as an overall sense of what is going on with the market throughout the NFL.

“If we don’t know what’s going on with everybody, we’re not doing our jobs,” Schneider said. “We’re just moving in like Seattle Seahawk-land.”

Also, another reason to monitor the market now is that the issue of Wilson’s future could come to a head next year as he enters the final season of his contract, a time when Wilson will undoubtedly seek a contract extension, one in which he would likely shoot to be the highest-paid player in the NFL.

What Wilson may want in a year or so figures to come up at some point in what Schneider said have been regular conversations over the last few years with Wilson’s agent, Mark Rodgers.

Schneider described their relationship as “good. We’ve had real good open lines of communication and he’s really like a father figure to Russ. And yeah, it’s good.”

But for now, with Wilson’s salary now down to being the fifth highest in the NFL at $35 million per year (Kansas City’s Patrick Mahomes is the highest paid at $45 million), Wilson is now more of a bargain than the past few years, a further reason for the Seahawks not to entertain trading him.

Asked if he was surprised how much talk there is about Wilson’s future, Carroll said he thinks the opposite. “Last year it was out there twice as much,” Carroll said.

Indeed, unlike in 2021, when it was Wilson’s comments about being frustrated about being hit as much as he has and saying he wanted to have more input in decision making that helped spur the rumors — and eventually led to a report that his agent had given the Seahawks a list of four teams to which Wilson would waive his no-trade clause — Wilson has said nothing this year other than that his “hope and goal” is to remain in Seattle for his entire career, if possible.

So why do the rumors linger?

“It’s a quarterback world right now,” Carroll said. “They are talking about all of them and you guys are doing everything you can to try to figure it out. That’s what you’ve gotta do. So there are a lot pf people taking shots, a lot of lines in the water right now trying to guess what’s going to happen.”

That Wilson suffered through his toughest season in the NFL due in large part to a middle finger injury that held him out three games and resulted in some spotty performances when he returned helped fuel speculation of his future.

Carroll said Wednesday one regret he has about the season is that he didn’t help Wilson out more once he returned for a marquee game at Green Bay on Nov. 14, specifically in emphasizing the run more to take the pressure off Wilson.

Carroll said the team “went right back” to its usual offense and should have made it so that Wilson “could transition back in. … I’ve got to do better than that. I can’t let that happen.”

But Carroll said the talks he has had with Wilson this offseason have been the same as always.

“He’s determined,” Carroll said. “He’s disappointed that we didn’t do better. We’ve been together too long to not kind of share that. And he’s ready to get back at it. He can’t wait to get playing again.”

And Wednesday, Carroll sent about as concrete of a statement as they likely ever will that the next time Wilson plays, it will be with the Seahawks.