Receiver Antonio Brown will be available to play for an NFL team following the games the weekend of Nov. 1 as his eight-week suspension for violating the league’s personal conduct policy will come to an end.

And yep, with that date fast approaching, cue up the rumors that the Seahawks are still interested in adding Brown to what is already the top-scoring offense in the NFL.

ESPN’s Adam Schefter reported Wednesday the Seahawks “are now positioned to make a push to sign him,’’ according to league sources. 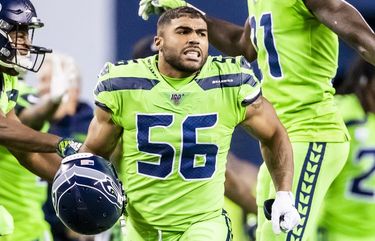 Seahawks coach Pete Carroll only fed the rumor mill further when asked about the story during his Zoom news conference Wednesday.

Carroll said the Seahawks are “tuned in’’ to the Brown situation and reiterated the team’s long-held philosophy to always “be in on everything.”

“We have endeavored to be in on everything that’s going on, and (general manager) John (Schneider) has done a marvelous job of always being tuned in to what’s
happening, and this is no exception,” Carroll said “We’ll see what happens as we go
forward. But we’re tuned in to what’s happening there.”

Asked a follow-up about how much digging the team would do to investigate the issues that landed Brown a suspension, Carroll said: “We’re nowhere there right now. Let’s wait and see what happens and all that. We do all of the homework we can think of doing. We will never think that we can leave a stone unturned. That’s how we approach everything. So we’ll continue to do that here.”

So, consider the Seahawks involved.

But as Schefter noted, the Seahawks “are not alone,’’ and the story said Seattle has not had any contract talks with Brown.

Still, Carroll’s comments Wednesday only furthered what has been more than a year of rumors connecting Seattle to Brown, which grew even stronger in the summer due to the relationship of Russell Wilson and Brown.

The two worked out in southern California this summer as did backup quarterback Geno Smith, also said to be close with Brown.

Wilson’s relationship with Brown, in fact, goes back to at least the summer of 2016 when they worked out together at UCLA, Brown memorably tweeting at the time “Man this guy has a cannon.”

Wilson is known to have advocated behind the scenes for Seattle to sign Brown ever since he first became available last year.

Last November, during an interview on ESPN, Wilson was asked about the team potentially signing Brown and having added Josh Gordon and didn’t deny that he’d be interested.

“For the Seahawks, we are trying to win a Super Bowl,” Wilson said then when asked about Brown and Gordon. “Trying to find every way to win. I think both of those guys, I’ve been around both of those guys. Both are tremendous talents, some of the best receivers, talent-wise, to ever play the game kind of talent. So any time you get an opportunity to play with a guy like that, you definitely want to.”

Receiver might not seem like Seattle’s biggest need given the success of the offense and Wilson having thrown for 19 touchdowns already.

But Seattle is in Super Bowl-or-bust mode, and adding Brown — a four-time All-Pro pick who had 1,297 yards in his last season with the Steelers in 2018 — would make the Seahawks that much more dangerous.

The Seahawks also anticipate getting Phillip Dorsett II back in the lineup at some point soon. He has yet to play due to a sore foot and remains on injured reserve but can return at any time.

Carroll said Dorsett is running and on Tuesday had “the best day he’s had since he came to camp.” But Carroll also said the Seahawks will take their time with Dorsett so that “once he’s back he stays back.”

Seattle also still has Gordon on the roster after signing him the week before the season. Gordon, though, remains indefinitely suspended with the NFL yet to announce anything definitive on his status.

Carroll said Wednesday the Seahawks signed Gordon without having heard anything about his suspension and remain in a holding pattern.

“We weren’t sure, (what Gordon’s situation would be when he was signed),” Carroll said. “We just had to just kind of wait it out and wait for the information to come to us. We didn’t have a timeline on it.”

Brown was released by the Patriots last September after playing just one game after a civil lawsuit was filed against him for alleged sexual assault, as well as published accounts in Sports Illustrated from another woman detailing allegations of unwanted sexual advances.

The NFL announced then that it was investigating Brown under its personal-conduct policy.

Brown was then suspended for eight games by the league July 31 with reports that he could be suspended further if more revelations came to light.

But for now, Brown remains on track to be eligible to play in two weeks and the Seahawks are in the mix to sign him until they aren’t.

Brown last fall signed a one-year deal with the Patriots worth up to $10.5 million. He wouldn’t get anywhere near that with the Seahawks, who as of Wednesday have a listed $3.9 million in available cap space.

Brown had previously been represented by noted NFL agent Drew Rosenhaus. But Rosenhaus cut ties with Brown last January and Brown is now listed as being represented by Ed Wasielewski of EMG Sports.

Seattle has one of the best 1-2 receiving punches in Tyler Lockett and DK Metcalf (in whatever order you want to place them) and have gotten solid contributions from David Moore and rookie Freddie Swain in complementary roles.

But Carroll reminded everyone of the team’s guiding philosophy when he tweeted before practice that it was “Competition Wednesday!” for the Seahawks.