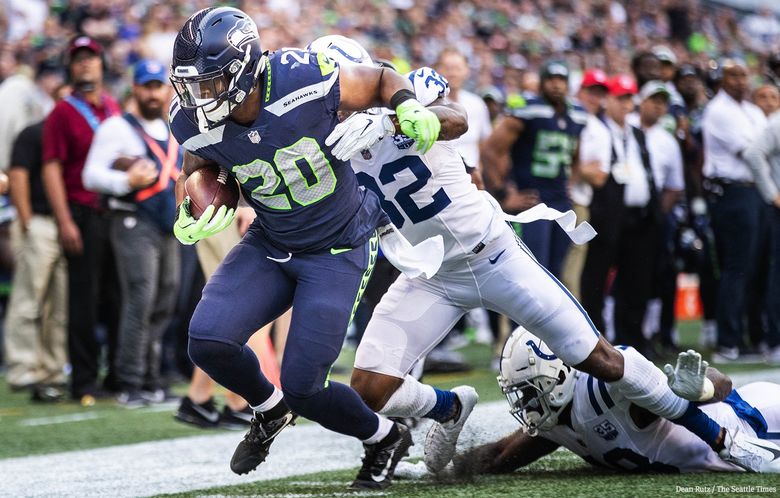 Rashaad Penny sets up Seattle’s first score with this 6-yard run to the 4-yard line in the 1st quarter. The Indianapolis Colts played the Seattle Seahawks in NFL Preseason action Thursday, August 9, 2018 at CenturyLink Field in Seattle, WA. 207183 (Dean Rutz / The Seattle Times)

On the day his grandpa died, Rashaad Penny ripped off one of the best performances in the history of college football. As he enters his rookie season, the Seahawks running back continues to play for his family.

Cornelius Penny used to call his grandson by his middle name:

Maybe you’ve heard of the kid. On the roster, his name’s Rashaad. A 5-foot-11, 236-pound running back, he was a surprise first-round pick of the Seattle Seahawks last spring, and he’s set to make his professional debut at Denver on Sunday.

At San Diego State, he led the nation with 2,248 rushing yards in his senior season. His seven career kick return touchdowns are tied for the FBS record.

It was his best game, on his worst day.

But first, back to Cornelius. What do you need to know?

The guy was always smiling, but he didn’t like taking photos. He never made excuses, and he hated dressing up. He loved the Oakland Raiders, professional wrestling and his grandkids — and not in that order. When Rashaad got into trouble, his grandpa defended him every time.

He was, Rashaad Penny said, “the most inspiring person in my life.”

Plenty of families are close. The Pennys could not be closer.

“We always had big houses, big rooms. They all used to sleep in the bed with my pops,” said Robert Penny, Cornelius’ son and Rashaad’s father. “My dad was everything, man. Him and my mom broke up when I was young. My dad lived either with us or around us the whole rest of his life.

“(My kids) had a beautiful upbringing. It was just love. He was like no other.”

Cornelius Penny died unexpectedly on a Saturday — a game day — of a heart attack in his sleep. He was 74 years old.

Of course, Rashaad Penny was under no pressure to play. And, to be honest, 8-2 San Diego State could have handled 2-8 Nevada inside SDCCU Stadium without him. When his brother delivered the news, Rashad wavered — but not for long.

It was Nov. 18, 2017, and Rashaad’s parents pulled off the road during their 100-mile drive from Norwalk, Calif., to San Diego, when they got the call.

They turned around, drove home and honored Cornelius Penny the only way he would have wanted.

“We watched the game, because I knew that’s what my dad would have been doing at the time,” Robert Penny said. “We used to watch the games together like it was a holiday.”

Holiday or not, Rashaad Penny set off fireworks. In a 42-23 victory over Nevada, he rushed for 222 yards and scored four touchdowns. He turned the first punt return of his career into a weaving, balletic 70-yard score.

“The punt return really had me going crazy,” said Elijhaa Penny, who stayed up until 1 a.m. the night before playing in an NFL game to watch from a Houston hotel room. “It was his first punt return and he took it to the crib. He’s that dude.”

And that’s not all that dude did. In the premier performance of his college career, Rashaad Penny also tried to attempt a halfback pass, tucked the football instead, reversed field and scampered untouched for a 23-yard score. He caught a kickoff on his goal line, hit a hole and glided 100 yards for that record-tying touchdown. He took a hand-off and high-stepped through feeble tackle attempts for another 67-yard touchdown, just for kicks.

“If anybody was still awake back east, they oughta watch and find out he’s one of the best five players in the country,” San Diego State head coach Rocky Long said after the game, wearing a weary grin. “I mean, I’ve seen a lot of really good players. They don’t do things like he did.”

“(My grandpa) had an impact,” Rashaad Penny said. “Every run I had that game, I felt light. Every touchdown I had, I felt light. I felt like I could score at any time on the field.”

Each time he reached the end zone, Rashaad Penny lifted his head and pointed to the sky.

“Then for Rashaad to do what he did, it was like, ‘Wow.’ He did that for grandpa.”

Added Robert Penny: “That game, I knew what he was thinking without saying it, without talking.

“I saw the way my son kept looking up.”

Rashaad Penny looked up to his grandpa.

He just played it a little differently.

“It was crazy because he would use his left hand and his right hand, so we would have to go buy a right-handed glove and a left-handed glove when he would play baseball,” Rashaad’s mother, Desiree Penny, said.

“We would just throw it out on the field (in the middle of an inning). When he was tired of using the right-handed glove, we would throw him the left-handed glove.”

And, just like that, a scout team star was born.

“We’d have him act like the best player on the team we were playing that week,” said 25-year-old Elijhaa Penny, who’s three years older than Rashaad. “Whether it was receiver, running back, quarterback, whatever, they used to put him wherever on the scout team. My best friends, to this day we’ll still be talking about it. ‘Man, remember when we were at practice and Rashaad jumped over Donovan and caught the ball?’ When he was on scout team he’d be doing some crazy stuff.”

“I used to score every single time,” Rashaad said with an understated smile.

It was San Diego State against Idaho, Rashaad against Elijhaa, Penny against Penny — the same as it ever was.

“It was really an incredible feeling,” Robert Penny said. “It kind of went back to when they were kids in the front yard, playing against each other. It was a great experience, man.”

In a 35-21 San Diego State victory, Elijhaa rushed 22 times for 90 yards and a 2-yard touchdown. A true freshman at the time, Rashaad played sparingly but returned a kickoff 41 yards.

Their whole family was there to see it. And score be damned, the Pennys won.

If that was a dream, then what is this?

Nearly four years later, Rashaad Penny is a touted 22-year-old rookie running back for the Seattle Seahawks. Elijhaa is entering his third season with the Arizona Cardinals.

On Sept. 30, inside University of Phoenix Stadium, another football game will serve as a makeshift family reunion.

Not that the Pennys aren’t already close enough.

“We talk every single day, every single hour, every single minute, every single second,” Rashaad said. “There’s always something that’s going on in the group (text) message. I’m telling you, I wouldn’t be surprised if my phone was blowing up right now, because of my family.

“It’s something that’s natural for us. There’s never a day when I’m not talking to any of them. There’s always some kind of communication.”

In fact, when Rashaad moved to Seattle, he asked his little sister, Breonna, to move with him … and she did. Rashaad’s little brother, Brionne, is verbally committed to play football at — you guessed it — San Diego State. He has his mother’s name — Desiree — tattooed on his right forearm. When he rented a house in Seattle, he set aside a room just for her.

His family is always there — as much as they can be.

“I think about calling my grandpa every day,” Rashaad said, “But then you realize he’s not around. It’s an every-day thing, because that’s how close I was to him.”

On Sunday, Rashaad Penny will make his NFL debut against the Denver Broncos. Three weeks later, he’ll face Elijhaa’s Cardinals in the first of two meetings in his rookie season. The rest of his family will be there, too, wearing T-shirts with both birds on the front and “Penny” spread across the shoulders.

The next time he scores, same as on that night against Nevada, his family will be watching. Elijhaa Penny will swear he’s dreaming. Robert will know just what his son is thinking.

Armein will be looking up.

at this point I couldn’t be more confident then I am now..