For the first time since before Russell Wilson came to Seattle and anyone had ever heard of the Legion of Boom, the Seahawks didn’t trade down or out of the first round of the NFL Thursday.

But that wasn’t the only surprise the Seahawks pulled when they decided to stand pat and use their original first-round pick for the first time since 2011.

So was the name of the player they selected at number 27 overall, linebacker Jordyn Brooks of Texas Tech, a player few analysts had pegged either as a first-round pick or mocked to the Seahawks, in part because he plays middle linebacker, a spot where Seattle has one of the best in the NFL in Bobby Wagner. 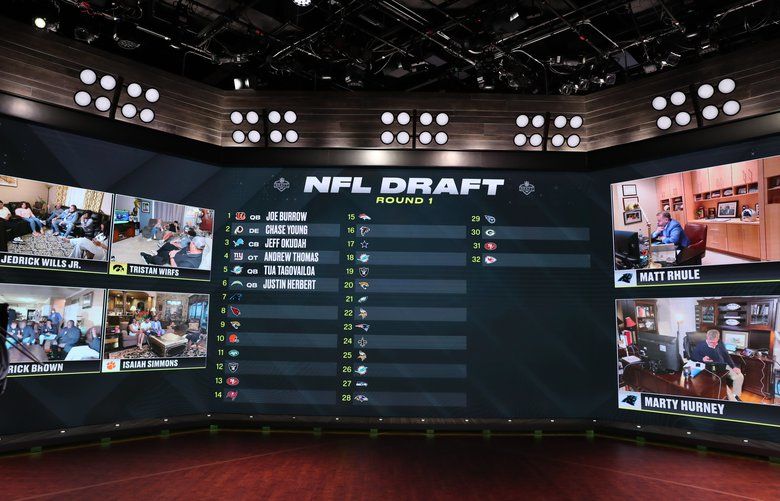 But Seahawks coach Pete Carroll and general manager John Schneider each said Brooks isn’t necessarily expected to just back up Wagner — or eventually take over for him — but instead can play each of the team’s three linebacker positions and could get on the field at any of them soon.

“He could play inside or outside for us,” Carroll said. “We are going to give this guy a chance and see where he can fit in.”

And while the Seahawks ended up not trading their pick, it wasn’t for a lack of trying.

Schneider said he had a trade lined up that “fell through at the last minute” to move down and that “bang, he (Brooks) was still there. So it worked out great.”

Among the teams Schneider said he was talking to was the Packers, who instead moved up from 30 to 26 right in front of Seattle to take quarterback Jordan Love.

Schneider said Brooks was “the best player on the board” when the trade to move down fell through with Green Bay and “we were really excited” to get him.

And even if Brooks might not have been taken solely as a potential heir apparent to Wagner, he comes to Seattle having already drawn lots of comparisons to him.

In fact, his coach Matt Wells once dubbed Brooks as “the next Bobby Wagner,” according to a tweet from former NFL player Ross Tucker. If that sounds like hyperbole, well, consider that Wells was an assistant at Utah State during Wagner’s last year there in 2011.

Brooks certainly put up Wagner-esque numbers at Tech: He had 108 tackles, three sacks and two fumble recoveries last year for the Red Raiders, and his 20 tackles-for-loss led the Big 12 and were the sixth-most in the nation.

But he was among those who didn’t see a pick to Seattle coming, saying that when his phone rang at his home in Dallas and it was the Seahawks he was caught off guard.

“When I got the phone call from Seattle it was a big surprise to me,” he said. “I hadn’t talked to them since the combine (in late February, early March in Indianapolis).”

But Brooks said once he saw it was Seattle on the phone he remembered that the meeting at the combine “went really well. I got good vibes (from the Seahawks). The surprise is a good surprise.”

Immediately after the pick was made, ESPN draft analyst Mel Kiper Jr. called the 6-foot, 240-pounder “a tackling machine,” noting his 4.54 40-yard time at the combine piqued the interest of a number of teams.

Jordyn Brooks says he was surprised Seattle took him since he hadn’t talked to Seahawks since combine. pic.twitter.com/p5Zzkn49Ix

Former Seahawks scout Jim Nagy, now the director of the Senior Bowl, tweeted after the pick that Brooks “reminded me of Bobby Wagner when I watched him” and that he was “one of the funnest players we watched this year.”

Carroll and Schneider also mentioned how impressed they were with him in their meeting and pointed out that Brooks persevered through having been homeless for a time while he was growing up.

“He just comes from the right stuff,” Carroll said or Brooks, who started 45 of 47 games at Texas Tech but was slowed late last season with a shoulder injury.

It was the first time Seattle used its own first-round pick since taking offensive lineman James Carpenter out of Alabama in 2011.

In every draft since then the Seahawks either traded down to accumulate more picks or traded its pick as part of a trade for an established player (receiver Percy Harvin in 2014 and tight end Jimmy Graham in 2016).

But in a first round that featured few trades, the Seahawks decided to stand pat this year.

Seattle has six other picks in the 2020 draft, including numbers 59 and 64 in the second round and 101 in the third, which will be held Friday night.

That Seattle has only seven total picks at the moment had led to the idea that the Seahawks would again trade down, as they have done so often through the years.

The pick of Brooks continues a trend of Seattle pulling surprises with its first picks in recent years. Seattle took running back Rashaad Penny at 27 in 2018 and defensive end L.J. Collier at 29 a year ago. Brooks was considered by most draft analysts as a second- or third-round pick.

And many observers figured the Seahawks would take a defensive lineman to address their pass rush or maybe a receiver or even a running back. Every running back remained on the board.

But Seattle wanted to beef up its linebacker position with Wagner and Wright getting on in age and Seattle having few proven players behind them. Cody Barton, taken in the third round last year, was the main backup at both inside spots last year but could also be slotted to play more at strongside linebacker this year.

And while Wagner has a contract that goes through the 2022 season, veteran weakside linebacker K.J. Wright is entering the final year of his contract.

Seattle also has not re-signed Mychal Kendricks, who played the strongside linebacker last year. And while Seattle took Cody Barton in the third round last year to back up at all the linebacker spots, Seattle could find ways to get both Brooks and Barton on the field this year.

Brooks will get a four-year contract worth up to $12.2 million with a $6.4 million signing bonus.

Sports Info Solutions rated Brooks as the second-best middle linebacker available in the draft after only Kenneth Murray, who went 23rd to the Chargers.

Wrote Sports Info Solutions in its scouting report of Brooks: “Brooks has the play, speed, range and effectiveness in both the pass and run game to make an impact at the next level, but his inconsistent ability in man coverage, pursuit angles and lack of consistent shed ability will likely hold him back.”

SIS graded Brooks as the best run-defending middle linebacker in the country last year and that’s an area where the Seahawks were hoping to improve this offseason after ranking 22nd in the NFL last year against the run, allowing 117.7 yards per game.