Seahawks defensive end Aldon Smith remains on the roster after being booked in Louisiana on a second-degree felony battery charge relating to an April 17 incident.

And for now that figures to be where he will stay pending the resolution of his case. An arraignment is set for July 14.

“In terms of his current situation, it’s not something we can talk about,” Seahawks general manager John Schneider said Wednesday. “We have to let the legal process take its course.” 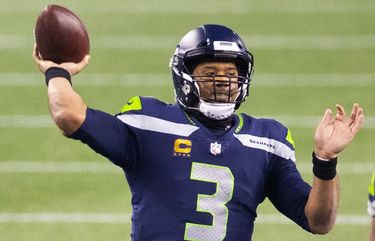 Seahawks refute Russell Wilson trade rumors: ‘We plan on him being here for a good, good while’

The arrest reiterated the risk the Seahawks took in signing Smith, who did not play during the 2016-19 seasons while suspended in relation to several different incidents. That included an allegation of domestic violence in 2018, to which he pleaded no contest to false imprisonment and violating a court order.

Schneider in 2012 had said the Seahawks “would never, ever take a player that struck a female or had a domestic dispute like that, or did anything like that.”

Asked about that comment Wednesday in light of the Smith signing, Schneider said the team has no official policy and considers each situation individually.

“I’ve learned a lot about throwing out blanket statements about these sort of things, whether it’s DUIs or robberies or, you know, domestic situations,” said Schneider, who became the Seahawks’ GM in 2010. “And so right when we got here I threw out a statement about it, and what I’ve learned over the years now is that every situation is completely different and you have to study every situation and be comfortable with your decisions. We researched Aldon this last time, (and) it was a minimum-salary deal, and we decided to take a shot and go for it.”

Linebacker K.J. Wright is the most notable of the Seahawks’ free agents who remain unsigned.

Schneider and coach Pete Carroll said there is a chance he could return to Seattle. Wright has been with the Seahawks since 2011.

“The door’s not closed,” Carroll said.

Schneider said the team didn’t expect that Wright would still be unsigned, noting there are other NFL teams with former Seahawks defensive coaches that could snatch him up.

That Seahawks are staying in touch.

Carroll said he had a “really good sit-down” with Wright a few days ago to “hear where he’s coming from and talk about the future and what’s possible moving forward.”

The Seahawks have seemed content, if not excited, to go with Jordyn Brooks — its 2020 first-round pick — as the full-time weakside linebacker in 2021 and has some other potential options at strongside linebacker, such as Cody Barton and possibly 2020 second-rounder Darrell Taylor there on occasion.

Wright played strongside linebacker in the base defense most of last season and moved to the weakside in the nickel in 2021. If he returns, the 31-year-old might have to accept a different role.

But Carroll hinted that Wright is on board with whatever Seattle might have planned, and that if something does happen, it would most likely be after the NFL draft.

“We feel really good about where we are with (Wright),” Carroll said.

Adams an ‘important part’ of future

The Seahawks have just three picks in the draft, which runs Thursday to Saturday. That’s in large part because they traded their first- and third-round picks to the Jets to bring in safety Jamal Adams. They also traded their 2022 first-rounder to New York.

“(What) I would say about the draft, our number one pick is Jamal Adams,” Carroll said. “That’s a heck of a pick.”

That the Seahawks gave up so much for Adams, who was the sixth overall pick in the 2017 draft, has led to the idea that they will be motivated to sign him to a long-term contract. Adams has just one year left on his deal and is due to be paid $9.8 million in 2021 as part of a fifth-year option exercised by the Jets last year.

“We want him to be here long-term for sure,” Schneider said. “He’s a great player. Really glad we made the trade to get him, and he’s gonna be a very important part of our future.”

Carroll said at one point when talking about the offseason that “we’re still going, the Jamal move is big, and there’s some other stuff coming up.” Whether that last part was a reference to Adams or other moves was unclear. But there seems little doubt the team will work hard to keep Adams around.

Carroll also reiterated that one reason the Seahawks were motivated to make the trade for Adams in July was knowing that this year’s draft may come with even more uncertainty than most drafts due to limitations on scouting due to COVID-19 restrictions, as well as some players opting out and some teams playing a limited schedule.

“When the conversation came up and the possibilities of all this happened, John was already making reference to this draft and understanding what it was going to be like, and we made a major decision to go ahead and do that,” Carroll said. “… So we’re still excited about the whole thing.”

Players encouraged to get vaccinated

The Seahawks hosted the University of Washington’s Dr. Vin Gupta for a virtual visit this week about COVID-19 vaccine. Gupta tweeted that it was a “great conversation” about “vaccine safety and effectiveness.”

Carroll said the team invited Gupta to “update everybody on what’s going on.”

Carroll said the Seahawks are encouraging players to get vaccinated and that “a number of guys have been,” though he could not offer a specific number.