Maybe it only makes sense that the talk afterward about the smallest draft class in Seahawks history centered mostly around the height of the players involved.

In filling out a three-person draft that was not only the fewest players Seattle has ever picked but the fewest any team has since 1999, the Seahawks took an offensive tackle two inches taller than anyone else on the roster, and a cornerback whose lack of stature may have been a reason he was still available in the fourth round.

“A monster of a man,’’ said general manager John Schneider of Forsythe, who spent the past two seasons playing left tackle and protecting the blind side of quarterback Kyle Trask, a second-round pick of Tampa Bay. 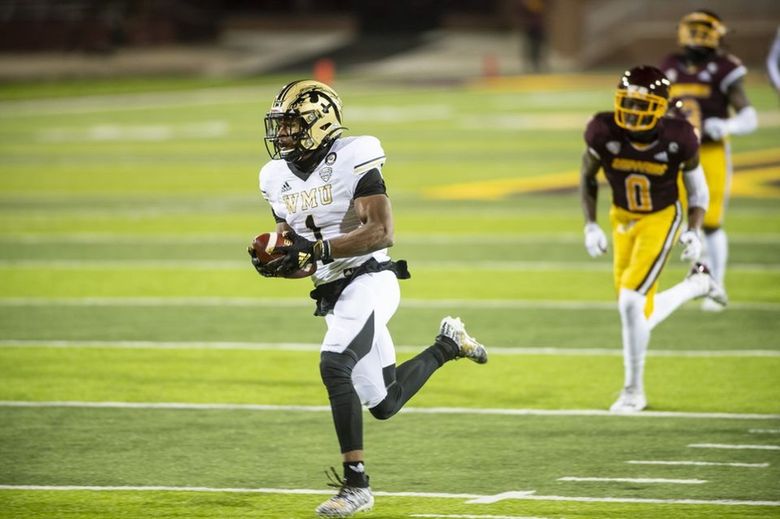 Forsythe was taken with the 208th pick after Seattle moved up nine spots to get him thanks to a trade with the Bears in which the Seahawks gave up picks 217 and 250.

The drafting of Forsythe came a few hours after the Seahawks selected cornerback Tre Brown of Oklahoma at pick No. 137 after having traded down eight spots in a deal with the Bucs in which Seattle got the 217th pick it then dealt to get Forsythe.

Brown is listed at 5-10, 188 pounds by the Seahawks though other sources had him at 5-9. His relative lack of height had many speculating he would play as a slot cornerback for Seattle. But Carroll said no, that he will start out playing on the outside, where Seattle has historically preferred players 6-foot and above, having been credited with reinforcing the value of big secondaries during the famous Legion of Boom era. And what Brown might lack in height, the Seahawks think he makes up for in speed (a reported 40 time of 4.42 seconds) and savvy.

“I’m sure Tre Brown would love to be 6-foot-2,’’ Schneider said. “And if he was 6-foot-2, he would be picked in the top 10, right? You can see him every weekend running all over the place in the Big 12 with all these receivers and all the speed that’s out there and competing his tail off. Yes, we would love to have big corners and all that. And we did, remember, when we got here. But you have to adjust to the times, too, and there is only a certain amount of players that you can pick from.’’

The pick of Brown came just after Arizona moved up to take cornerback Marco Wilson of Florida at 136, which might have helped influence Seattle’s decision.

Schneider said the Seahawks had another deal in the works to move down even more — which would have meant gaining another draft pick — before pivoting and taking Brown.

“There was a situation where we could have gone back even farther after we worked with Tampa, to see if we could get Tre a little bit later, which we just decided that was not the thing to do,’’ Schneider said. “We needed to just pick Tre.’’

Brown will be thrown into a crowded mix of cornerbacks but a group in which there also appear to be few sure things (and which also includes 5-9 D.J. Reed, whose success playing on the outside last year when he replaced the injured Quinton Dunbar the second half of the season may have shown the Seahawks that small corners can succeed in their system playing on the boundaries).

“We didn’t draft him as a nickel, if that’s what you’re asking,’’ Carroll said of Brown. “He’s going to play outside and start there, and we’re going to see what he brings to the competition. He played outside throughout his years. Hasn’t played inside as a featured nickel guy, but we know that he would have the ability to do that. The one-on-ones in the Senior Bowl were really indicative of his ability to stick to people. He went against really good receivers, really good one-on-one opportunities, and whether he is playing inside or outside, he’s going to do fine.’’

“Size never meant anything to me,’’ said Brown, who was a standout on coverage units and figures to make an immediate impact on punt and kickoff teams at the least.

“When you say what position I play I just say I’m an athlete,” said Brown, who started 33 games for the Sooners. “I do special teams really well. When I get on the field I’m going to give it my all — kickoff, return whether it’s guarding you on the punt return as well. Every time I get out here I’m going to try to destroy you, be the fastest guy out there and just make those plays. So I pride myself on special teams just like defense.”

Brown will join second-round pick D’Wayne Eskridge, who also had impressive college return numbers, in competing for Seattle’s return jobs, a position the Seahawks made clear they’d like to improve.

As for Forsythe, Schneider said the team began targeting him about 15 to 20 picks or so before landing him

“It seemed like forever we waited for Stone, we tried trading up forever to get him,’’ Schneider said. “… Just from an ammunition standpoint, being able to work your way up, I think it was in the early 190s where we felt like we had enough to go try. Then from there we just started the whole time.’’

Seattle finally pulled off the deal with the Bears to get him, a move that then ended the Seahawks’ draft after three picks. The fewest Seattle had made before was five in 1994 and 1997.

Some analysts thought Forsythe might go as high as the third round, and Forsythe said it was “a long waiting game’’ to finally hear his name called.

“That’s a question I kind of want to find out myself kind of why it took so long for everyone,” Forsythe said. “But I’m so still grateful to get the chance to hear my name called.”

Seattle appears set at its two tackle spots for 2021 with Duane Brown on the left side and Brandon Shell on the right and also re-signed veteran Cedric Ogbuehi to compete on the right side and back up on both sides, if needed. But the contracts of all three expire after the 2021 season, meaning Seattle will look closely at Forsythe to see if he can be an heir apparent at either side as early as 2022, if not earning playing time as a rookie.

Carroll said Forsythe “runs well for a big guy’’ but that they will have to work with him on coming off the ball well — and staying low when needed, not easy to do at 6-9. But Schneider said the team got positive reports when Forsythe was worked out by former Seahawk guard and NFL Hall of Famer Steve Hutchinson, who is now a football consultant with the Seahawks.

“It’s pretty cool to have Hutch spend as much time with him as he did,’’ Schneider said.

Once the Seahawks turned in the card on Forsythe they were done with the draft — in fact, they held their post-draft news conference before selections were finished.

As Schneider didn’t need to remind anyone, the team had traded most of its selections earlier for veterans Jamal Adams, Carlos Dunlap and Gabe Jackson, and feel as if those three alone make this a successful draft.

One that may not be repeated anytime soon. While Seattle also dealt its 2022 first-round pick for Adams, it currently has seven others.