Yes, grading an NFL draft in the immediate moments after it’s completed is an exercise both premature and usually in futility.

Every Seahawks fan at this point remembers the infamous F grade the 2012 class received from one Bleacher Report writer.

But then, what fun would it have been if that had never happened? It certainly spurred any number of memorable quotes from the players involved.

So, while acknowledging that even those who made the picks really have no idea how all of this is going to turn out down the road, here’s a look at some of the grades for the Seahawks in the just-completed 2020 draft. 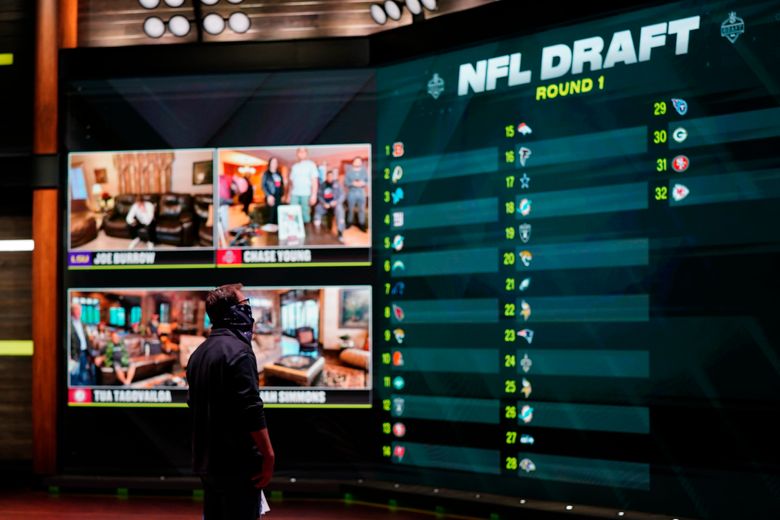 What he said: “They needed some help in the front seven in this draft. So it should be no surprise that they went defense with their first two picks, taking inside linebacker Jordyn Brooks (27) in Round 1 and defensive end Darrell Taylor (48) in Round 2. Brooks really popped on the Texas Tech tape, and I had him No. 32 overall in my rankings. Bobby Wagner and K.J. Wright aren’t on rookie contracts anymore, so I like the pick to get a young sideline-to-sideline defender and tackling machine.

“As for Taylor, I thought this was a reach, but he has some solid bend off the edge. He was a late riser on many teams’ boards and had surgery on a stress fracture in his shin in January. He certainly fits the Seahawks’ type, though. Damien Lewis (69) should compete at one of the guard spots, and DeeJay Dallas (144) is an intriguing running back prospect and a solid Day 3 pick. I could see him cutting into Rashaad Penny’s snaps. Alton Robinson (148) is an up-and-down edge rusher. Tight end Colby Parkinson (133) underachieved, but at 6-foot-7 he has intriguing physical attributes.

“I’ll stick with the same grade I gave the Seahawks last year, though I like their first pick more than I did in 2019.”

Comments: “The Seahawks found an athletic punisher to play inside in Jordyn Brooks, a quick edge rusher in Darrell Taylor and a beast of a guard in Damien Lewis in Rounds 1-3. Parkinson is a fair fourth-round pick who will have to compete with a few tight ends already on the Seahawks‘ roster. Dallas joins former ‘Canes teammate Travis Homer on the Seahawks. The powerful Robinson and Taylor should complement each other well off the edge. (Freddie) Swain is an underappreciated receiving talent who can work in the slot, and (Stephen) Sullivan has real potential as a stand-up tight end — giving up a 2021 sixth-round pick to get him shows their belief in that potential.”

What they said: “This (Jordyn Brooks) was the biggest reach of the first round according to the 2020 Consensus Big Board put together by Arif Hassan over at The Athletic (he was taken 57 spots higher than his rank). It wasn’t much better on our board either, as he was our 64th-ranked prospect. From a run defense (91.5 run-defense grade in 2019) and tackling perspective, he is one of the best linebackers in the class. He’s not someone who is going to play all that well in space or make plays in coverage, though.”

What he said: “The first-round selection of LB Jordyn Brooks was curious. The Seahawks probably could have moved down and taken him later, and they didn’t address their glaring pass-rush need until midway through Round 2 with Darrell Taylor. Their best move might have been getting G Damien Lewis in the third round.”

What he said: “The Seahawks have a history of drafting players with not this upcoming season, but the following season, in mind. That appears to be the formula GM John Schneider and head coach Pete Carroll followed again this year.

“After being unable to trade down in the first round, they took Jordyn Brooks. It’s a puzzle, figuring out exactly why. Perennially underappreciated star veteran K.J. Wright is in the final year of his contract. Though he showed little sign of decline last year, it stands to reason the Seahawks might be willing to move on once his deal expires. (That’s largely how Seattle has approached 30-plus-year-old star defenders in the past.)

“Bobby Wagner might seem old because he has been playing at such a high level for so long, but he doesn’t turn 30 until June and his contract runs through 2022. There is an opt-out after 2020, but it’s hard to fathom Seattle planning to go that route at this point. Wagner has shown no sign of decline on film. (Though remember, teams often start seeing a player’s decline up close in practice before that decline makes its way to the playing field.)”

What he said: “Seattle does things its own way, public perception be damned, and you have to respect that approach. The staff is immune to outside influence and knows exactly what Pete Carroll wants in a prospect. Does it always net the Seahawks the best value? That’s debatable. But this isn’t the dumpster fire of a draft class some will say it is. Taylor and Robinson have moldable pass-rush ability if their character concerns have been diminished, and Lewis, a few of the late pass catchers and Dallas (a good pass blocker) should help out Russell Wilson.”

What he said: “Even though he isn’t an immediate need, first-round linebacker Jordyn Brooks has future-star potential. He fits their defense perfectly. Taylor was probably taken a little high, but third-round guard Damien Lewis could be an early starter in his career. I didn’t love this draft, but it’s hard to doubt John Schneider.”

What he said: “Here we go again with John Schneider going way outside of the box in the first round with Brooks being the latest version of Rashaad Penny and L.J. Collier. Brooks was a major reach defensively, and offensively the Seahawks missed several better values for the offensive line, backfield and receiving corps. By far Taylor and Robinson were their best picks, so at least it’s good they addressed their massive need on the edge pass rush.”

What he said: “Meh. Got their usual haul of players they seem especially willing to overdraft. For years, it was taboo to question the wisdom of coach Pete Carroll and GM John Schneider, who made so many mid-round home run picks early in their tenure but have picked just two Pro Bowlers since 2016 — one of those P Michael Dickson.”

What he said: “The Seahawks went against the expectation and didn’t trade their first-round pick for the first time since 2011. It was an even bigger surprise when Seattle used the pick on Texas Tech linebacker Jordyn Brooks. It’s hard to see where Brooks fits on Seattle’s defense. Bobby Wagner just got a massive contract, and is one of the best defensive players in the NFL. Last year the Seahawks picked Cody Barton and Ben Burr-Kirven. This one is puzzling.

“The team made up for it the rest of the draft. The Seahawks took edge rusher Darrell Taylor in the second round, filling their big need at that position. Guard Damien Lewis from LSU is a nice system fit in Seattle. My favorite pick Seattle made came in the fourth round with tight end Colby Parkinson. He has the size to create mismatches and has a surprising level of speed in his game.

“Taking Alton Robinson of Syracuse was another good Day 3 pick. It was smart to double down on edge rushers with the hope that one of Robinson or Taylor works out. Robinson is a little bit better of a stand-up player.’