RENTON — Darrell Taylor represents the great unknown for the Seahawks. And what better time than the first week of training camp to dream on the potential of a player who is already turning heads.

Teammates Bobby Wagner and Carlos Dunlap instantly summoned the same word to describe Taylor: Explosive. Coach Pete Carroll has raved about his athleticism, and you have to watch only a little of training camp to see what they’re talking about.

The Seahawks think so much of Taylor’s abilities that they have inserted him into the strongside linebacker (SAM) role held last year by K.J. Wright. They have made no move to bring back Wright, the beloved elder statesman; it appears to be Taylor’s job to run with, in the same sort of duel SAM/LEO (rush-end) role they envisioned last year for Bruce Irvin until he was injured. 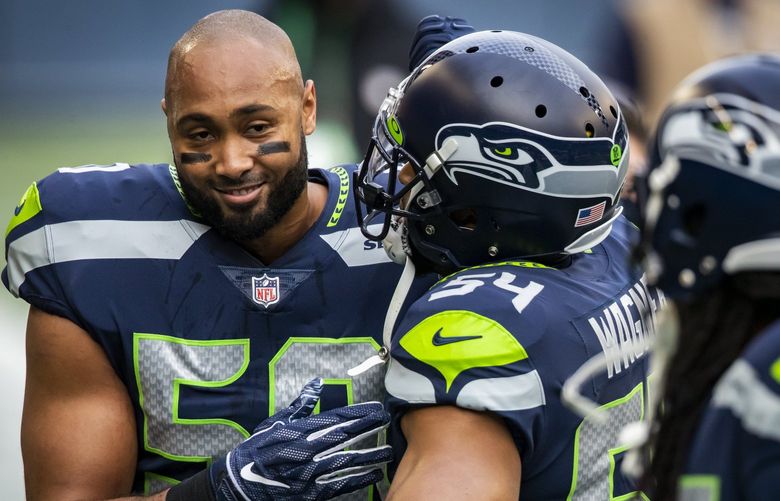 Yet the flip side of being the great unknown is that it comes with a level of uncertainty to temper the excitement.

The last time Taylor played in a real, live football game was the Gator Bowl on Jan. 2, 2020, roughly 19 months ago. He had 1½ sacks to help his Tennessee Volunteers edge Indiana, 23-22. It was the last snapshot in the big picture that enticed the Seahawks to trade up with the Jets to snare Taylor in the second round, No. 48 overall.

The Seahawks expressed confidence that Taylor would be ready for the season, despite surgery to place a titanium rod in his leg. Yet despite occasional teases that his return was imminent, the injury agonizingly lingered all year. Taylor finally returned to practice during the playoffs, but any hopes of game action in 2020 ended with the Seahawks’ wild-card loss to the Rams.

“I would definitely have been able to play the next week (if the Seahawks had won),” Taylor said Thursday at the Virginia Mason Athletic Center. “I just did some things to help me out to get back on the field, and the last two times that I practiced last year was pretty incredible, being out there with them running around and everything.”

After a successful and highly encouraging showing in rookie minicamp in May, Taylor is out there running around again. Essentially the pro equivalent of a redshirt freshman, Taylor is loving every minute of it. The Seahawks are equally thrilled with his continuing availability, which is the biggest question hanging over Taylor. He says not to worry about his health, however.

“I’m definitely 100 percent, and back ready to play how the Seahawks need me to,” Taylor said.

And that is as a hybrid who will be counted on to contribute to the pass rush — the role envisioned for Taylor from the start — while having the ability to drop back into pass coverage. Taylor says it’s not much different than what he did at Tennessee, so the adjustment shouldn’t be traumatic.

The Seahawks will be going decidedly younger at linebacker, with Jordyn Brooks holding down the weakside position. Ten-year pro Wagner will provide the veteran leadership in the middle. Wagner, however, won’t be alone in tutoring Taylor; Dunlap says he embraces that job as well.

“Wow, that guy is very explosive,” Dunlap said of Taylor. “He came in really good shape, and he looks like he’s excited to explode off the tape. I just want to polish the things that he doesn’t know, because he clearly has the talent and the tangibles to play in this league. But football is 90 percent mental, so I’m trying to give him all the mental information that I can to help him speed up that curve from missing last year.”

Taylor admits that missing last year was miserable, and has made him hungrier to prove himself this year.

“I think we all are hungry to show what we can do,’’ he said. “We didn’t have the season we wanted last year, and especially me. I didn’t play last year, so I want to get out there and show my teammates what I can do this year.

Maybe the best news of all for the Seahawks is the word Taylor used to describe his offseason preparation, and the way he feels now as he runs through workouts and drills: “Normal. It’s very normal for me now.”

The Seahawks are counting on Taylor’s new normal to give them a jolt of energy on the defense. There might not be another player as enticing — or as mysterious.