The Seahawks have to cut their roster from 80 to 53 by 1 p.m. Tuesday. And as Tuesday morning broke, so did news of some moves the team has already made.

Some players will be brought back to the 16-man practice squad, which can be assembled starting Wednesday. Players who are waived must first clear waivers before they can be signed to the practice squad.

Here’s a look at some of the players known to have been waived. 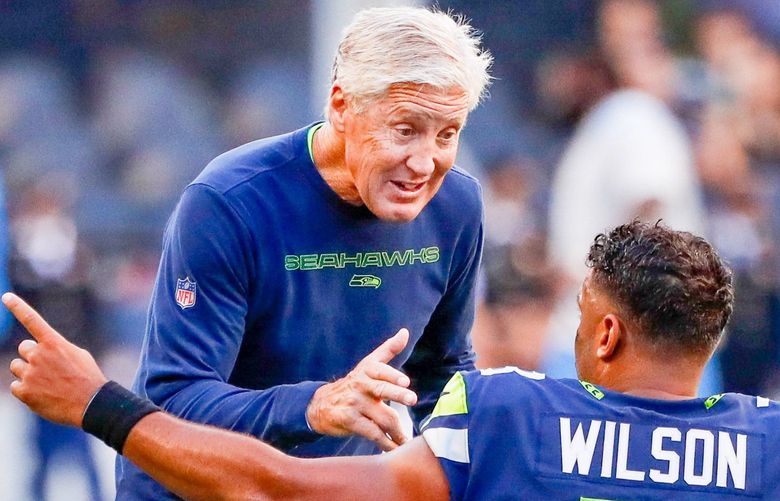 The Seahawks on Tuesday assembled their initial 53-man roster for the 2021 season.

And there weren’t a lot of surprises as players such as running back Rashaad Penny and cornerback Tre Flowers — whose futures some had debated — were on the roster.

Seattle had to cut its roster from 80 to 53 and did so by waiving 26 players and releasing another three who were vested veterans. At the end of Tuesday, their roster sat at 52 because a trade for cornerback Sidney Jones was not yet official. But he will be added to the roster when it is.

Here’s a look at the roster by position.

Cornerback Gavin Heslop: A source told The Seattle Times that Heslop is being waived but that the team hopes to get him back on to the practice squad. Heslop had a solid camp, and showed some versatility being used in the slot the last few weeks. He was on the PS all of last season, as well, and on the active roster for one game.

Wide receiver Aaron Fuller: The former UW standout is being waived, according to ESPN. He had five catches for 61 yards in the preseason and 9 yards on three punt returns (with a long of 9) and would seem a likely candidate to again sign onto the practice squad. Fuller was also on the PS all of last season.

Linebacker Lakiem Williams: The Spanaway Lake grad signed on Aug. 12 to add depth to the LB corps in the wake of injuries. He had seven tackles and could be a practice squad candidate. His waiving was reported by ESPN.

Cody Thompson, who appeared a serious competitor for a final spot on the roster at receiver, is being waived, as reported by ESPN. Thompson had two catches for 21 yards in the preseason and is another who would be a likely candidate for the practice squad. Thompson was on the PS all of last season.

Brad Lundblade, who was the third-team center throughout the preseason, is being waived, according to ESPN. But Lundblade would seem an almost certain candidate to end up back on the practice squad. He was part of Seattle’s PS the final month-and-a-half last season, as well.

ESPN reported Tyler Mabry will be waived. A second-year player, Mabry was on the practice squad all last year and would be a likely candidate to end up there again this year. Mabry struggled with a foot injury in the preseason and saw action only in the final game against the Chargers.

The NFL Network reported the Seahawks will waive Jordan Simmons, who has nine starts in his NFL career, six coming last season. The Seahawks reportedly hope to get Simmons back on the practice squad. Simmons appeared to be passed up as the swing guard — meaning, the player the team views can back up at either spot on gameday — during the preseason by Phil Haynes, who also got a little bit of work at center.

A league source told The Seattle Times that Josh Johnson will be waived but that Seattle hopes to bring him back to the 16-man practice squad. Johnson, a rookie undrafted free agent out of Louisiana-Monroe, led the Seahawks with 75 yards on 23 carries in the preseason.

CB John Reid: Several outlets reported that Seattle will waive Reid, who was acquired last week for a conditional 2023 seventh-round pick from Houston. Reid played left corner for Seattle last week, but the Seahawks acquired Sidney Jones on Monday. His waiving allows Seattle to keep its 2023 pick. Seattle hopes to get him back on the practice squad.

WR Travis Toivonen: ESPN reported he will be waived. He had two catches for 32 yards in the preseason.

WR Connor Wedington: The former Sumner High star’s waiving was reported by ESPN. He had three catches for 21 yards in the preseason.

The UDFA out of Virginia Tech had some good moments in the preseason with 1.5 sacks and will likely be back on the practice squad. His waiving was reported by ESPN.

OL Jared Hocker: Hocker played guard for Seattle in the preseason. His waiving was reported by ESPN.

OL Tommy Champion: Champion was also waived by Seattle a year ago and then re-signed to practice squad and that could happen again. He played tackle in the preseason.

TE Cam Sutton: He had four receptions for 12 yards and could be a practice squad candidate. His waiving was also reported by ESPN.

He caught the only TD for Seattle in the preseason. His waiving reported by Pro Football Focus.

—Bob Condotta
Bob Condotta: 206-515-5699 or bcondotta@seattletimes.com; on Twitter: @bcondotta. Bob Condotta covers the Seahawks for the Seattle Times. He provides daily coverage of the team throughout the year.