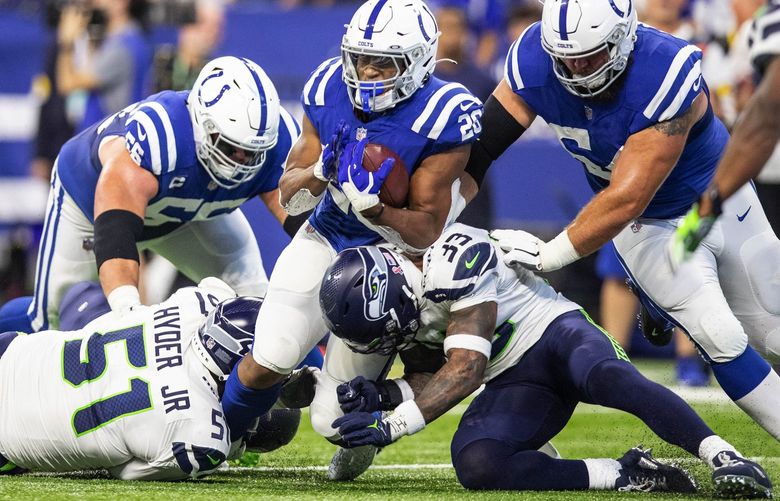 Colts score quickly, but only 2:08 remains

WR Dee Eskridge down after catch, but walks off

Seahawks stop Colts on fourth down just outside of red zone

OK, that’s a Seahawks defense that can win some games.

In the third quarter, Seattle forced two three-and-outs (while the Colts actually lost a yard) and recovered a fumble, consistently harassing Colts quarterback Carson Wentz. With a 21-10 lead entering the fourth, the Seahawks have registered two sacks and seven quarterback hits (all from defensive linemen). And a year after they allowed 450 passing yards in the opener against Atlanta, Wentz has completed just 15 of 23 passes for 152 yards and a touchdown.

If the Seahawks can get a stop and a score, it feels like they may be able to put this one away.

Seahawks defense comes back up with ball on Colts' fourth down

Chris Carson fumbles to give Colts ball back in own territory

Poona Ford down on the field, but jogs off

DeeJay Dallas getting some run behind Carson

Rashaad Penny will not return with injury

WR Penny Hart out with concussion

Seahawks forced to punt on first possession of second half

DK Metcalf has first catch of the game

A perfect half for Wilson

Seattle has scored touchdowns on three of its four offensive possessions, all ending in Wilson TD throws — two to Tyler Lockett and another to Gerald Everett.

Wilson is 9-11 for 166 yards and three TDs with a perfect passer rating of 158.3, and he spreading the ball around expertly.

True, DK Metcalf — who has been dealing with a calf injury that was listed on the injury report on Friday — has no targets or receptions.

But Lockett has three receptions for 96 yards, tight ends Will Dissly and Everett have combined for four receptions for 48 yards, and Chris Carson also has one reception for 16 yards.

Fourth-year end Rasheem Green appears to be picking up where he left off in the preseason. He had a sack in the first quarter and then hit Carson Wentz to force an incompletion on the first play of Indy’s last drive of the second quarter.

Seattle is bringing ample pressure but so far the only sacks or QB hits are by linemen — Green has two hits and a sack and Benson Mayowa one hit.

Pete Carroll hinted throughout the preseason that the Seahawks could rotate at some positions where they felt they had pretty even battles.

That turned out to be true at both the nickel and center spots. Ugo Amadi started the game at nickel, but Marquise Blair then played there the next two series.

The Seahawks announced that backup running back Rashaad Penny is questionable to return with a left calf injury. Penny was listed as limited with a calf injury in practice earlier this week.

That could mean Travis Homer and/or DeeJay Dallas will need to play some in the second half to spell Carson some.

Metcalf back in after limping off

Penalty bites Colts, who will punt back to Seahawks

Seahawks punting back to Colts

Tyler Lockett walks off under own power

Shane Waldron’s first drive as the Seahawks’ offensive coordinator went about as planned.

That’s thanks to a 33-yard Chris Carson run on third-and-1, punctuated by the 222-pounder stiff-arming safety Julian Blackmon through the crust of the earth; and quarterback Russell Wilson tossing a pop fly to the middle of the end zone that Tyler Lockett flipped his head to retrieve for a 23-yard score. In all, it was a nine-play, 81-yard drive – and a positive first impression.

On the other side, a Jamal Adams offside penalty on third-and-10 prevented a possible three-and-out … and yielded a 14-play, 67-yard field goal drive that lasted a whopping 9:19. The Seahawks need to prove they can consistently slow Colts running back Jonathan Taylor and get off the field.

Russell Wilson picks up Seahawks' first first down on scramble

Colts get on the board early with FG

Colts in the red zone early

Seattle general manager John Schneider said on the team’s pregame radio show on ESPN 710 Seattle that it was “just a coach’s decision to place L.J. on the inactive list."

Collier, who turned 26 on Sunday, was inactive for five games as a rookie in 2019 when he battled injuries. But he was active for all 16 games last season.

Collier was listed as a starting defensive end on Seattle's public depth chart this week with Kerry Hyder Jr. as the backup.

Schneider noted that the Seahawks were fully healthy and “it was hard for the staff to figure out" the rotations up front.

Schneider also noted the Seahawks using some different schemes with their defensive line that meant wanting to go with all of the team’s rush end players. Collier generally plays more of the 3-technique or strongside end spot.

The other five inactives as Seattle had to pare its roster to 48 were QB Jake Luton, RB Alex Collins, OLs Stone Forsythe and Dakoda Shepley and CB Bless Austin.

For Seahawks, biggest unknown entering 2021 season is if offense can take off under OC Shane Waldron

RENTON — Pete Carroll is set to embark on his 16th season as an NFL head coach. He also served as USC’s head coach for another nine.

But if Carroll has learned a lot about football in all those years, one thing he said he’s never figured out, is predicting how his team is going to perform heading into its opening game.

“I don’t know nothing,’’ Carroll said with a laugh Friday when asked whether he had a handle on how the Seahawks will play in Sunday’s opener at Indianapolis. “After all this time you’d think I’d know something. But I don’t know nothing.’’

Still, some parts of the team are more predictable than others.

The big unknown is the offense, and particularly first-year coordinator Shane Waldron. Waldron has called plays only once in his life, in 2011 at Buckingham Browne & Nichols (Massachusetts) High School.

And away we go with the 46th season in Seahawks history.

Will this be another season to remember (I think we could all use another 2013 right about now)? Or one to forget (and take heart — there’s almost no way anything could ever be as bad as 1992)?

The story begins to unfold at 10 a.m. Sunday against the Colts in Indianapolis.

Carson Wentz threw the last touchdown pass of his Philadelphia Eagles career against the Seattle Seahawks in November.

Now the Seahawks will try to prevent him from throwing the first of his career with the Indianapolis Colts on Sunday.

Wentz had foot surgery Aug. 2 to remove a piece of bone that had broken loose in his foot, and his status for Sunday’s opener against Seattle had loomed as uncertain throughout the preseason.

But Wentz has gotten the go-ahead to start against Seattle, having participated in practice all week.

Seahawks fully healthy as they head to Indianapolis

Pete Carroll’s seen just about everything in a football coaching career that dates to 1974.

But he’s not sure he’s ever seen what he did Friday — a Seahawks game status report that was completely blank.

Seattle’s status report Friday listed no one in any of the three categories, meaning all 53 players on the team’s active roster are considered healthy and ready to play when the team kicks off its regular-season opener at 10 a.m. PT Sunday at Indianapolis.

RENTON — Seahawks safety Jamal Adams has plenty of goals for the 2021 season, especially after signing a contract last month making him the highest-paid safety in NFL history.

But at the top of the list — and key to all of the rest — is staying healthy.

When he held his first weekly news conference of the season Thursday, Adams declared himself healthy.

After an offseason of discontent, have the Seahawks and Russell Wilson found the right recipe for success?

RENTON — Russell Wilson cooked during the season and then he stewed after it.

Now, as the Seahawks enter yet another season where anything short of the Super Bowl will be deemed disappointing, the question is whether the team has given Wilson all the necessary ingredients to get there.

OK, so maybe it’s just about time to let the Wilson-cooking analogies flame out.

But for better or worse, that debate — whether the Seahawks are “letting Russ cook’’ enough to take advantage of his vast talents during the prime of his career — has come to define the conversation about the Seahawks as they embark on a season that may be as critical as any in the 12-year Pete Carroll era.

But Wilson’s discontent in the offseason was far from a media creation.