With preseason games over, now arrives the three most chaotic days in the NFL as teams cut their rosters from 80 to 53.

The deadline to set the initial 53-man roster is Tuesday at 1 p.m. Seattle time. But the cuts are likely to come in waves, with teams also looking to see if any players they may need to release have value to other clubs.

After the final cutdown, teams can assemble a 16-player practice squad. But those players first have to clear waivers before they can be signed. So in that sense, 69 of the 81 players on Seattle’s current roster might be kept. (The Seahawks have an additional player in linebacker Aaron Donkor who doesn’t count as a part of the International Pathway program.) 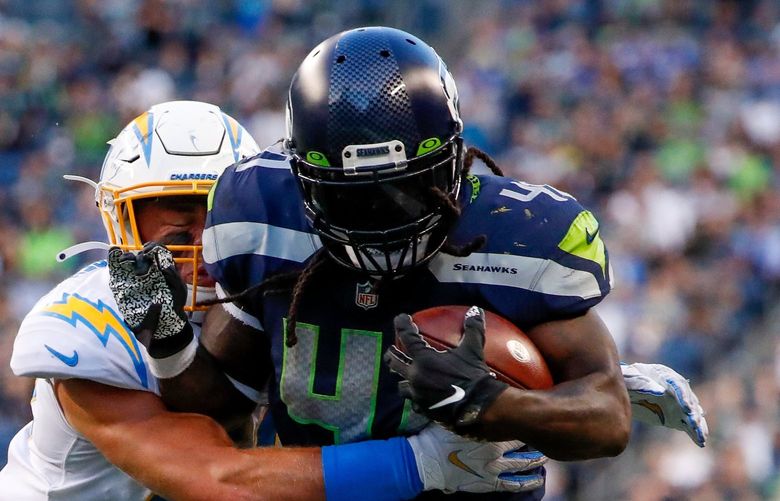 Alex Collins seems to have played his way onto Seahawks roster. What does that mean for Rashaad Penny and the other backs?

Comment: Smith confirmed the team’s comfort in him as the backup with his play in the preseason finale. Mannion would seem certain to re-sign to the practice squad.

Comment: Could the Seahawks really just cut Rashaad Penny, their controversial first-round pick of 2018? That’s the one big question here as Homer, Collins and Dallas all seem pretty sure to make it behind Carson. Coach Pete Carroll twice this week heaped praise on Homer’s potential and value to the team both on offense and special teams. Dallas had a solid camp and Collins was one of the team’s most consistent performers in the preseason. Penny, meanwhile, missed a couple of weeks early and finished the preseason with 32 yards on 12 carries. After the win over the Chargers, Carroll praised every running back who played without naming Penny. Could a trade of some sort be in the works? That seems more likely than just being waived. So for now, I’m keeping all five while acknowledging that may not be how it ends up.  And as for why both Homer and Dallas will make it? Each is an integral part of special teams, something none of Carson, Penny or Collins would be asked to do much of, if at all.

Comment: The team remains hopeful Parkinson will be ready for the regular season. And remember, Parkinson has to be on the initial 53-player roster if the team wants to put him on injured reserve and then have him return after three weeks. Mabry seems a certainty for the practice squad.

Comment: If Seattle keeps a sixth receiver on the roster, Thompson and Fuller seem like the top two to be considered. Fuller had some good special-teams moments which might help his cause. But the Seahawks might gamble that they wouldn’t get claimed on waivers and then re-sign them quickly to the practice squad.

Comment: Simmons has been a valuable player for the Seahawks the past few years. But Seattle will have to make a tough call or two here and versatility could be the deciding factor. Curhan also really impressed the past few weeks. But would Seattle really keep six tackles?  But maybe there’s some roster juggling the Seahawks can do to make it happen.

Comment: The big question is if the Seahawks keep Nkemdiche, who after a good start to camp has been dealing with injuries and did not see action in any of the preseason games. Carroll’s comments after the game on Nkemdiche were a little vague — and maybe predictably so — saying only the team will have to talk about his status. For now, I’ll side with him making it as his early camp performance definitely intrigued the team. Collier’s play this preseason didn’t really inspire a lot of confidence that he’s ready to really turn a corner. But it’s hard to see him not making it.

Comment: Taylor and Robinson are hybrid end/strongside linebackers. For the purpose of this, I’ll categorize each as linemen. That has Seattle keeping four off-ball linebackers with Bellore now essentially a linebacker first and foremost, needed to fill in the depth after the loss for the season of Ben Burr-Kirven. Will the team trust that Bellore is good enough to be a backup or explore other options? Rhattigan made a good impression in the final preseason game and is a lock for the practice squad.

Comment: As a vested vet, Randall would not go through waivers, so the Seahawks could cut him and then re-sign him later, giving some roster flexibility for something such as Parkinson’s need to be on the roster. Neal is another one to watch due to his injury. He may also need to be on the initial 53-man but then go on IR, another reason the team might need to cut Randall initially. Flowers had seemed a question mark heading into camp. But Carroll has praised him at every turn and his spot seems secure now. After the preseason games, Blair and Amadi are the de facto backup safeties, along with Neal. If there’s one who could be a surprise entry to make it, it might be Heslop, who the Seahawks used more at nickel the past few weeks. Reid was just acquired this week but that the Seahawks moved aggressively to trade for him would seem to indicate they will keep him around.

Comment: Nothing to decide here as Seattle’s kicking specialists are set.