SANTA CLARA, Calif. — With the confetti falling, Richard Sherman dropped to one knee and prayed. Then his body shook as the tears flowed. There was no audacity in him at this moment, no defiance, only gratitude.

As a young Seattle Seahawks cornerback, he barked into his first Super Bowl after tipping a pass and beating the San Francisco 49ers. He trashed Michael Crabtree in an on-field interview with Erin Andrews after the NFC title game six years ago and sparked a national conversation about sportsmanship, race and premature judgment. 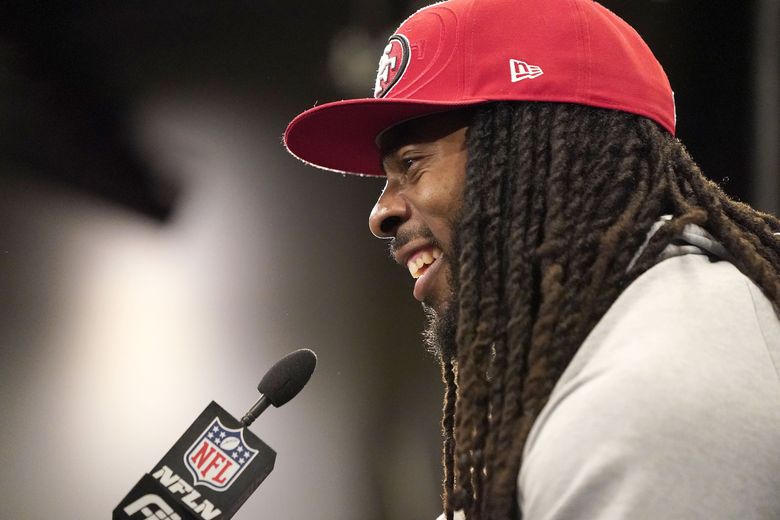 Now as a married 31-year-old father of two children, as a 49er of all things, as a man with surgical scars on both Achilles tendons, Sherman is going back to the Super Bowl for a third time in his career fully understanding how difficult the journey can be in a sport he often makes look so easy.

“It’s a long road,” Sherman said. “And there’s a lot of work that goes into it. A lot of things that you don’t see, a lot of unspoken things, a lot of work away from the cameras. You guys see the games. You don’t see the hours and hours of work. The hours and hours of study. The hours and hours of treatment, pain, overcoming pain. The nights at home you don’t even get to spend with your kids because you’re trying to get your knee back or hamstring back or your back. And your kid’s sitting there rubbing on you trying to make you feel better. People don’t understand the sacrifice that goes into being great at this game.”

Let’s allow him to continue, because this is a slightly different side of Sherman, at least for those who aren’t around him regularly. As someone who covered him for five of his seven seasons in Seattle, I can tell you there are so many knotted layers to him, all of them fascinating and complicated. In a single conversation, he can go from tearful to introspective to thoughtful to percipient to maniacally competitive and full of trash talk. He’s most famous, or infamous, for that last trait. But he is so much more, and that’s why he has a large number of defenders willing to combat some of the over-the-top hatred he receives whenever he storms into controversy.

“No matter what — win, lose, draw — you sacrifice,” Sherman said. “You give up your body and your time and your health and your mind. You’re usually somewhere between going psychotic and you’re locked in, you know what I mean? Because it’s such a crazy edge you’ve got to be on. That’s why it’s a little emotional. You get to appreciate it a little more.”

Over the past nine years, as he has risen from fifth-round draft pick to five-time All-Pro to future Hall of Famer, Sherman has become the NFL’s quintessential self-made man. The Seahawks ignited his career with an ideal Cover 3 defensive scheme, but the intelligence, the instincts, the mentality and the ball skills acquired from being a converted receiver — that’s all Sherman. As a 6-foot-3 throwback to a more physical time, he shouldn’t be this good in a modern game obsessed with speed, playing in space and reimagining the rules to favor offenses. But Sherman won’t be denied, and when he starts going off about disrespect (some of it real, some invented) and citing his statistics, you realize how he manufactures his edge.

He has needed every bit of it to transform into what he has become in the last two seasons with the 49ers: a self-remade man. His ascension was remarkable, but his comeback elevates him to another level of greatness. He did it while betting on himself more than most of his peers would.

Sherman signed with San Francisco a day after the Seahawks released him in March 2018. It was a surprise for two reasons: The 49ers, previously a hated rival, were rebuilding; and Sherman negotiated the deal himself, with only the assistance of his wife, and signed a three-year, $39 million incentive-laden contract that included a full guarantee of just $3 million. The deal was mocked throughout the league, by other players, by media members and by fans. Sherman, still recovering from the Achilles surgeries, fumed and used his anger to rehab with purpose.

“He was determined not just to come back, but to be better than ever,” said his older brother, Branton Sherman.

Sometimes, you forget Richard Sherman survived the streets of Compton, Calif., chose to play football at Stanford to make an academic statement in his community and graduated with a communications degree. He is street-wise and book smart. He is savvy and stubborn. When he does something unconventional, he doesn’t do it casually, and so he understood the risks when he became his own agent. Actually, let’s not call it a risk. He always has hated the word.

Years ago, I asked him about the risks he would take as a corner. He corrected me quickly. “You talk about risk like I’m out there being reckless,” Sherman said. “If I decide to jump a route or bait a quarterback, it’s something I’ve studied, thought about and weighed the consequences long before doing it. Don’t call it risky and assume that just by being an athlete, I got away with it. I trust what I know.”

That’s how Sherman negotiated that contract. That’s how he lives. He knew his body and felt he could maximize that contract, no matter how strange it looked. For most players, it would have been more comfortable to take more guaranteed money, even if it meant a lower average annual salary. Sherman gambled he could earn most, if not all, of that $39 million.

Two years later, the deal looks a lot better than it did when he signed it. This season, Sherman hit all of the incentives in his contract, earning $4 million by making the All-Pro team, being named to the Pro Bowl and playing 90% of the defense’s snaps. He celebrated by writing on Twitter, “Fans please find me all those ‘He negotiates a bad deal’ receipts … I wanna see something.”

During this playoff run, Sherman has been mostly humble, with a few dashes of bravado to let people know he hasn’t forgotten those who doubted he would come back. In San Francisco, he has been able to show a little more versatility in defensive coordinator Robert Saleh’s system, mixing in more quarters and man-to-man schemes with the Cover 3 zone he played so brilliantly for most of his time in Seattle. But he’s still the same multidimensional personality.

“I get tired of hearing, ‘Oh, man, he’s a zone corner,'” said Sherman, who engaged in a Twitter argument with former NFL star cornerback Darrelle Revis about this very subject. “I get tired of hearing the excuses for why I’m great. In the playoffs, in big games, I show up. I show up year in, year out, whether it’s 2011, 2012, 2013, 2014. Unless I tear my Achilles, I’m out there, and I’m doing my job at a high level.”

A little more than a year ago, I visited with Sherman at the end of his first season with the 49ers. They were injured and awful, finishing out a 4-12 season. Sherman was healthy and effective coming off his surgeries, but he didn’t intercept a pass all season for the first time in his career. Defenses ignored him and exploited his younger teammates. He wasn’t frustrated, though. He seemed almost content. He was more settled than I’ve ever seen Sherman.

“Just changing it up for a little bit,” Sherman said. “I’m not an old dog, you know.”

He is old enough to be the definitive great cornerback of this era, though. He is nearly a decade into his run, and he is still clinching NFC title games with flair. Now he has a chance to add a second championship to his Hall of Fame resume.

“He is a legend,” rookie linebacker Dre Greenlaw, 22, said. “I have been watching Richard since I was a young kid and to be able to play with a guy like that is just special.”

Greenlaw was 16 when Sherman screamed to the world that a quarterback should “never test me with a sorry receiver like Crabtree.” Sherman still talks plenty of junk, but he’s a husband and a father now. He picks his spots.

“I’m in the same body, no matter what,” Sherman said. “But I think you treat people and carry yourself differently in all three phases. One of them you’re on the battlefield. You’re there to do a job. In the locker room, you’re a different person because you’re around your teammates. You’re there for a purpose. And at home, again, the circumstances change. That’s like me asking a person, ‘Hey, as a lawyer, are you the same way in the courtroom as you are with your wife?’ Know what I mean? It’s going to be a different kind of approach for him. It’s going to be a different preparation, a different seriousness, a different tone. So it’s difficult for me to say I’m the same as I am in the locker room at home and on the field because there are three different fields of life.”

In every field, you can be certain of one thing: Sherman will do it his way. And most likely, it will work. If you need proof, he’s always happy to show the receipts.