The 1-1 start to Seattle’s season was right in line with what many expected — and better than a lot of people might have thought.

But 1-2 already is verging on dangerous territory with the Seahawks now faced with playing three of their next four on the road, especially with a leaky defense for which there appears no quick fix.

And while the offense showed vast improvement Sunday, it might be asking a little too much just yet to think it can consistently win shootouts.

The next two games — at Detroit and at New Orleans — are winnable. They are also losable. And anything less than 1-1 in those games, and this season could get away from the Seahawks in a hurry. 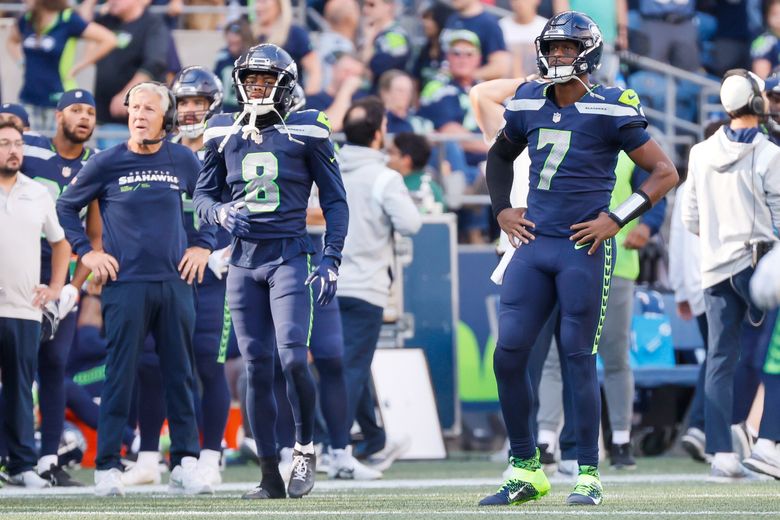 On to the grades.

The Seahawks indeed opened it up for Geno Smith, and for most of the game he responded, completing 32 of 44 passes for 325 yards and two touchdowns. The Seahawks not only showed faith in Smith by letting him throw it more, and more downfield, but also in utilizing a no-huddle offense often. Seattle had 25 plays out of the no-huddle Sunday compared to just 10 in the first two games combined. There might be a temptation to put too much of an emphasis on the final fourth-down play — that was a longshot to begin with, and the Falcons’ secondary was in deep outfield mode. The bigger picture is that Smith played well enough for Seattle to win.

Seattle had its best rushing game of the year with Rashaad Penny churning out a tough 66 yards on 14 carries. Penny hasn’t been as prolific as a year ago but through no fault of his own.

Rookie Kenneth Walker III, in his second game, showed some of what has excited the Seahawks so much with a nifty 21-yard gain in the third quarter when he broke a tackle and cut back against the grain. But Pete Carroll also said he missed a few assignments, saying he went the wrong way once — presumably on the play when Smith was left with no choice but to take a 3-yard loss on what was a second-and-two at the Atlanta 41 early in the second quarter on a drive that ended in a punt. DeeJay Dallas took over as the third-down back after Travis Homer left with a rib injury in the first quarter and held up well.

Tyler Lockett (9 receptions, 76 yards) and DK Metcalf (5-64) combined for 14 catches for 140 yards with the Atlanta defense again laying back in a lot of two-deep zone designed to not let either get deep. Hard to blame either for anything that happened at the end — Carroll and Smith said the pass over the middle to Metcalf that was incomplete on the second-to-last series was tipped. Marquise Goodwin had a big catch on fourth down, and Penny Hart also had a catch for 15 yards. Dee Eskridge remains invisible.

For three quarters, this was a really stellar day as the line kept the Falcons off Smith — just two QB hits and no sacks — and leading the way for 100 yards rushing on 20 carries. But Damien Lewis had two critical holding penalties in the fourth quarter, and Smith was sacked twice as Seattle didn’t score on either of its fourth-quarter possessions. Still, this was another step in the right direction for rookie left tackle Charles Cross and right tackle Abraham Lucas, and in general a performance the Seahawks can win with.

This was exactly the kind of production the Seahawks have sought and promised out of the tight ends as they combined for nine receptions for 105 yards and a touchdown. Will Dissly had the touchdown, his second of the year, along with three catches for 34 yards, while Colby Parkinson had a 36-yard gain on an early third-and-one play and finished with two for 44.

Ageless Al Woods had another strong game with five tackles and a quarterback hit. But otherwise it’s hard to find a lot to cheer about with the line. Atlanta simply had too much room to run too often, and Marcus Mariota had too much time to pass throughout. He was sacked three times, but one came on a cornerback blitz by Coby Bryant. Another when he held the ball forever trying to find someone open, and Darrell Taylor finally got to him. The Seahawks hung their hat last year on being one of the best run defense teams in the NFL, but it isn’t happening this year as the Seahawks have allowed 471 yards on 96 attempts in three games, an average of 4.91, more than a yard more than the 3.8 of last season. It’s not all on the line, but it certainly isn’t faultless.

When including the outside linebackers, this was a tough day at the park. Uchenna Nwosu took the blame for being out of position on the 40-yard run by Cordarrelle Patterson late in the third quarter on the first play of Atlanta’s go-ahead drive. And the linebackers had only two QB hits combined. A lot of the running game issues also have to be put on the shoulders of inside backers Cody Barton and Jordyn Brooks. And receivers certainly don’t appear to be too worried about going over the middle.

Another really rough day for this group. Atlanta throughout seemed to pick on safety Josh Jones — forced into a starting role due to Jamal Adams’ season-ending injury — and cornerback Michael Jackson, who became the starter on the left side due in large part to injuries to others. The safeties also have to take some of the blame for a lot of those big runs becoming bigger ones. Rookie cornerback Tariq Woolen continues to be a bright spot, and he turned in the first interception of his career on the last play of the first half. It’s worth wondering why the Falcons tried that at all. But that’s Seattle’s only interception of the season. And Seattle’s secondary has only five pass defenses in 86 attempts by opponents (three others are by linebackers/linemen).

A good enough day in this area as Dallas had a 30-yard kickoff return, Jason Myers went 3 for 3 on field goals and kicked all six of his kickoffs for touchbacks, and Michael Dickson kicked both his punts inside the 20, with a net average of 48.