We’ve reached the end of our Seahawks roster countdown. Having started at 90, it’s now time to reveal the top 10 Seahawks players as the team begins training camp Wednesday.

Why he’s ranked here: The Seahawks themselves placed pretty high expectations on Everett by signing him to a one-year deal worth $6 million, the highest on a per-year basis of any of the outside free agents they signed this season. The thought is his relationship with new offensive coordinator Shane Waldron — each spent the last four seasons with the Rams — will mean a significant role in the offense. Football Outsiders projects Everett for 37 catches for 367 yards and three TDs. The Seahawks, though, are probably hoping for a lot more.

Potential role in 2021: Starting free safety and leader of the secondary.

Why he’s ranked here: Diggs was named to his first Pro Bowl in 2020 after leading the Seahawks with five interceptions, the most for any Seattle player since 2015. But his future remains unclear. He’s entering the final season of his contract, and Seattle could still view Marquise Blair as a potential successor. So the 28-year-old Diggs has a lot riding on this season. 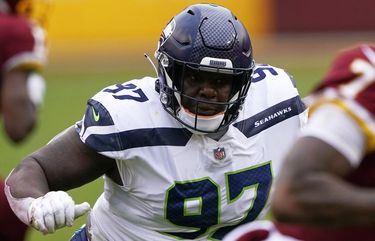 Why he’s ranked here: Carson’s new two-year contract makes it clear that he’s the leader of Seattle’s backfield. And Pete Carroll’s comment that the Seahawks need to run it more and better suggests his usage could return to pre-2020 levels. Carson averaged a career-high 4.8 yards per carry in 2020, and it might have gone unnoticed that he solved his previous fumbling issues. He had just one after having a combined 10 the previous two seasons.

Potential role in 2021: Starter at the LEO/rush end position and leader of the team’s pass rush contingent.

Why he’s ranked here: The second-half turnaround of the pass rush and defense wasn’t as simple as just adding Dunlap. But it certainly was a big part of it. Dunlap also showed a fun flair for the dramatic with two last-minute, essentially-game-ending sacks. Can he do it again at age 32? Give the Seahawks credit for patiently playing out his contract process and getting him back for $6.8 million per year for the next two seasons.

Potential role in 2021: One half of one of the best receiving duos in the NFL.

Why he’s ranked here: Lockett set a team record last season with 100 receptions and is rapidly entering the conversation to be included among the best overall WRs in team history. In what felt like more of an oddity than a concern, Lockett was a little boom-or-bust last year — eight of his 10 TDs came in three games.

Potential role in 2021: Again protecting Russell Wilson’s blind side and leader of the offensive line.

Why he’s ranked here: Brown, who wants a new deal before the season, turns 36 next month but he remains among the best left tackles in the game. He ranked fourth among left tackles in blocks blown per snap last season, according to Football Outsiders, and allowed just two sacks in 1,048 snaps.

Potential role in 2021: Half of one of the best receiving duos in the NFL.

Why he’s ranked here: Metcalf morphed from rookie sensation to certifiable star in Year Two, with a team record 1,303 yards and 10 touchdowns. Now the big question — will his numbers rise even more in the new offense? One specific task for Metcalf is to decrease his drops. He was tied for fifth in the NFL with nine drops last season, five on passes of 15 yards or more. But if he does exceed last year’s numbers — which may not be as easy to do if the Seahawks do get more production out of tight ends and other receivers — then Metcalf will set himself up that much more for a huge contract extension entering the 2022 season.

Why he’s ranked here: Adams transformed the look and nature of Seattle’s defense a year ago. According to Football Outsiders the Seahawks ranked first in the NFL in defensive back blitz percentage at 21%. And once the Seahawks figured out to how to fully utilize that within the framework of the rest of the defense, Seattle’s defense became one of the best in the NFL. Adams, 25, will presumably soon have a new contract assuring his long-term presence in Seattle.

Potential role in 2021: 10th straight season as the quarterback of Seattle’s defense.

Why he’s ranked here: Wagner turned 31 last month and NFL eyes will watch closely to see if age is starting to catch up to his legendary speed. But his leadership and experience will be more vital than ever now that he is the only defensive player left from either of the Super Bowl teams.

Why he’s ranked here: It seems impossible there could be more focus on Wilson’s play than there already has been throughout his career. But then came Wilson’s surprisingly drama-filled offseason. There’s zero reason to question how committed Wilson will be to the Seahawks for this season even if most around the league figure Wilson’s future with Seattle will be revisited again next year. Worth wondering, though, is how “broken’’ an offense that set a record for points scored last year really was. But after the offseason that was, the onus will be on Wilson to do his part to make the Seattle offense even more dynamic — and to help advance Seattle past the divisional round of the playoffs since the last Super Bowl appearance following the 2014 season.