In their first public comments since before the offseason of Russell Wilson’s discontent began, Seahawks coach Pete Carroll and general manager John Schneider on Wednesday basically paraphrased one of the more famous lines from the movie “Animal House” — there is nothing to see here; all is well.

“There really wasn’t a problem,” Carroll said of the weeks of rumors about Wilson’s future that kicked off in earnest in February when Wilson expressed frustration with getting hit as often as he has in his career.

Those rumors eventually peaked with a report that Schneider had trade discussions with the Chicago Bears during a North Dakota State Pro Day in March before Carroll blocked the deal. Ian Rapoport of the NFL Network — the league’s official media arm — said Chicago’s offer included “multiple first-round picks.”

Schneider said that while teams did call about Wilson there was never any “active negotiations.”

“There was a number of teams that called after that media blitz that happened,” Schneider said during the team’s annual news conference to discuss the upcoming NFL draft. “But, no, I never actively negotiated with anybody, with any team. Now, did people call? Absolutely.“ 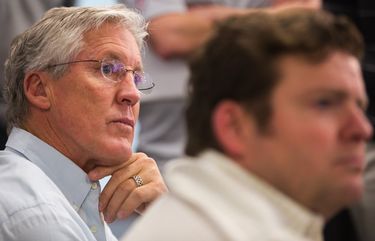 Carroll said he was in contact with Wilson throughout the offseason and summed up the rumors as mostly a media creation, and said he has talked with Wilson about understanding how his words can be construed — or misconstrued.

“It’s a media problem,” Carroll said in what were his first comments since Jan. 11, two days after the Seahawks’ season ended with a wild-card playoff loss to the Rams. “It wasn’t a problem for us because we knew the truth.” (Schneider had not talked to the media since the 2020 draft).

Carroll was asked why he didn’t speak up earlier to say there was nothing to the Wilson rumors and responded that he didn’t feel the need to because he didn’t think there was substance to any of the reports.

Among those reports was one from ESPN’s Adam Schefter that Wilson had “told” the Seahawks he would waive his no-trade clause to go to the Raiders, Bears, Cowboys or Saints.

While the Seahawks tried to downplay the entire Wilson matter, Carroll acknowledged that he did talk to Wilson about that report.

“I had made a clear statement to Russ, let’s just shut down and be quiet on this stuff,”’ Carroll said. “We don’t need to say anything. We know the truth of what’s going on. When that came out, that kind of got over the top, and it opened up some other conversations that didn’t need to happen. That was an example of why we’re quiet and why we don’t say anything. …. I wish we would have avoided that.”

Carroll also refuted the idea that Wilson had asked for more of a say in team decisions, a topic that emanated from Wilson’s comment on “The Dan Patrick Show” in February: “I want to be involved. At the end of the day, it’s your legacy, your team’s legacy. … It helps to be involved more. That dialogue should happen more often.”

Carroll said he has always sought out Wilson and other players for advice.

“I’m not trying to think I’m standing here like I have all the answers,” he said. “I want all of the input I can get to make the decisions that I make. … He has his opinions at times and I’m fine with dealing with that, just like I was with other players that have been here in the past. It’s not any different. But he never made a statement that he had to do that, he had to have more say so — that never happened. None of that happened.”

Carroll also said he had no issue with Wilson saying he was frustrating.

“He was asked the questions and he responded that he was frustrated,” Carroll said. “Well we all are, you know. We don’t win the last game of the year, particularly when we were at home, in position, in the playoffs and had a chance. We felt like we had a really good opportunity and health in our favor as well. It was hard. So I think that’s a pretty normal reaction to be frustrated.”

Said Schneider: “Pete Carroll and Russell Wilson are the two most passionate and competitive people that I know. And, you know, passionate people just say passionate things, and I think that it just kind of came out.”

As for Wilson’s future with the Seahawks?

Carroll, who last season signed a new contract that keeps him with the team through the 2025 season, said he plans on it being a long one.

“Russ has been our quarterback for a good while,” Carroll said. “And we’ve got a long contract with him. And when all of the conversation went about trades and all that, I knew what the truth was — we weren’t trading Russell. We plan on him being here for a good, good while — I don’t know how many years it is now, but we’re in great shape and a long future ahead of us is shared. Russ knows that and I know that.“

Carroll also said he didn’t think Wilson, who turns 33 in November, had to do anything out of the ordinary to mend fences with teammates. Some have wondered specifically about the offensive line in light of Wilson’s comment that “we’ve got to get better up front.”

“There’s nothing that we need to do other than to go back to work, look each other in the eye, be straight up and accountable to one another and do what it takes to get that done,’’ Carroll said. “… Nothing’s changed, and right now he is as jacked up as he’s ever been. He’s in the process (of learning the team’s new offense being installed by coordinator Shane Waldron). He’s totally after it. He’s doing a great job.”