RENTON — The one-day contract the Seahawks handed K.J. Wright so that he could officially retire with the team created a memory that will undoubtedly last a lifetime.

As expected, Wright, a linebacker for the Seahawks from 2011-20 who was a key part of the two Super Bowls in that decade, announced his retirement on Thursday during an emotional 25-minute news conference at the VMAC.

With his family filling the front row of seats in the auditorium where he attended daily team meetings for years, he led with a 14-minute statement in which he thanked coach Pete Carroll, general manager John Schneider, trainers, equipment men, teammates and others in the organization, many of whom were in attendance, He also thanked his mother, father and wife, calling each on stage to be with him as he explained what each meant to him.

“It’s a beautiful day, man,” Wright said as he choked back tears.

It was also a day Wright acknowledged he wanted. 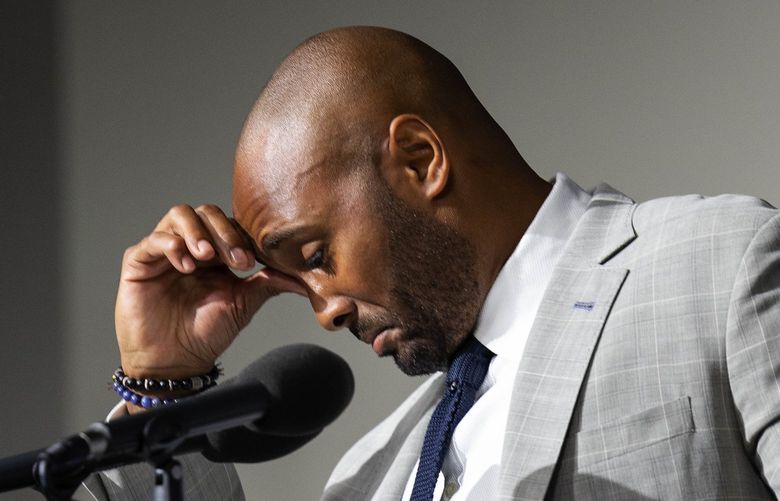 Seahawks sign K.J. Wright so he can retire with Seattle

He said when he knew retirement might soon be in the offing he met with Schneider and asked if he could sign a one-day contract.

“Without hesitation he said ‘of course,’” Wright recalled.

The Seahawks signed Wright to the ceremonial contract on Wednesday, allowing him to then retire Thursday.

And if in a perfect world he’d still be playing — the emotion he displayed throughout made clear how much the game and the Seahawks meant to him — he at least was able to go out in the manner he wanted.

“This is a really special day for me to see y’all here,” Wright said.

The team hadn’t been able to sign a retiring player to a one-day contract — something that happens regularly around the league — during the Carroll/Schneider era. But Carroll said he was glad it could get done with Wright.

“The timing just doesn’t always work out,” Carroll said. “We had the opportunity, and everything hits at the right time, so it was just right. John (Schneider) seized the moment, and we had the space to do it. Sometimes, you just don’t have that, but it just worked out perfectly. The whole thing is a perfect relationship.”

The now 33-year-old Wright admitted frankly that the decision to retire came in large part because he had few options left to continue his career.

He said he first began to realize his career was close to its end when he had few offers to play after the 2020 season, when he became a free agent after his third contract with the Seahawks ran out and Seattle decided not to re-sign him.

“I thought ‘somebody’s about to call,’” he said of his foray into free agency in 2021. “But that didn’t happen. … That sucked. But I feel like God was telling me ‘K.J., you had a great season, but this time is coming to an end.’ And I could start processing it.”

Still, while he’d hoped to play his entire career with the Seahawks, he accepted an offer from the Raiders to play during training camp last September. He played every game with Las Vegas, but being away from home proved even harder than he’d thought.

And this year, he decided if he couldn’t play with the Seahawks, he didn’t want to play anywhere any longer. With the Seahawks defense now in a complete transformation from the Legion of Boom era, Wright decided to make his retirement official.

“It’s hard because I’ve been around for 11 years,” Wright said. “I’ve seen guys’ career ending. I’ve seen guys to still want to play, but the phone stops ringing. My goal was always 10 years and for me to get what I got, I have nothing to complain about.”

Wright also thanked Seattle fans, recalling his anxiety when he was drafted by a team three time zones away.

“Coming from Mississippi to Seattle, I was in a culture shock,” Wright said. “I honestly thought I had landed in a different country. But when I got here, y’all embraced me since Day One.”

Wright finished as the third-leading tackler in Seahawks history and also the third-most playoff games played, among a litany of accomplishments that also included being the team’s 2018 Walter Payton NFL Man of the Year nominee.

The reverence with which Wright is held by the team was evident in the presence of Carroll, Schneider and many teammates and coaches at his news conference, and the ovations he received at the beginning and end.

That comment epitomized a day of celebration for a player who was known for always doing things, well, right.

And if some players of that era may have evinced some bitterness on the way out there was none of that with Wright.

In a moment that typified the tone, Wright thanked Carroll, saying “I love you, man. You’re the definition of what a coach (should) look like on and off the field. We kicked a lot of ass together and had some fun doing it.”

Wright said he plans to stay in the area, noting that many other Seahawks from that era — including teammates Kam Chancellor, Cliff Avril and Doug Baldwin — also intend to stay in Seattle. His longtime linebacking partner Bobby Wagner has also said he will keep a residence in Seattle.

“I’m so thankful that my boys are here,” Wright said.

He also said he hopes to stay involved in the organization in some capacity.

But not, he made clear, in coaching.

“I’ve got the heart for it, and I think I’d be really dang good at it, but they make a really, really big sacrifice,” Wright said. “They’re up here super early, leaving super late, and I’m just not mentally ready to be away from home like that.”

Indeed, he said he wants to stay home to watch his three kids grow up, attending every event he can. “I don’t want to miss a thing,” he said.

What he knows he will miss, though, is the camaraderie with his teammates, a bond that was especially unique during the Super Bowl era.

“The hardest part about all of this is saying goodbye to the locker room,” Wright said.

But Wright intends to stay as close to the game as he can.

Asked if he’d thought he’d be able to handle going to a game this season, Wright said, “Damn right. I’m going to be at all the games I can make sitting in the suites, sipping tequila with (former Seahawk) Lofa (Tatupu).”