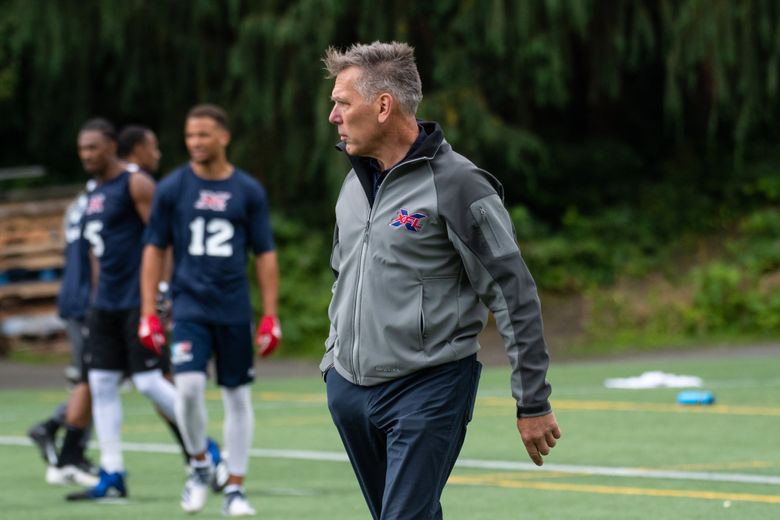 Jim Zorn had never played football and had no expectations when turning out for the sophomore football team.

The only thing he knew was he wouldn’t quit.

That is what he had done in basketball and baseball as a freshman at Gahr High School in Cerritos, Calif., walking away during the season because he wasn’t getting a chance to play.

“When I quit, I felt horrible,” Zorn said. “I felt that inside. I had never played football, but I decided, ‘I’m not quitting, I’m going to see it through.’ ”

More than 50 years later, Zorn is still seeing it through.

Zorn, who captured the city’s heart as the dashing quarterback for the expansion Seattle Seahawks and later became an NFL head coach, is tasked with building another Seattle expansion team.

Jim Zorn was the original must-watch QB in Seattle

Zorn is the coach and general manager of the Seattle Dragons — the city’s new XFL franchise that begins play in February. If you question whether Zorn, 66, has the commitment and energy to make this a success, you don’t know him at all.

His route to the NFL wasn’t typical or easy. But he is always up for a challenge, always ready to try something new and always willing to see things through.

The making of a quarterback

Zorn, who exudes charisma, did not grow up as a coddled star athlete. He was into skateboarding and bicycling and didn’t play a team sport until a friend talked him into running cross-country as a freshman.

He was the slowest guy on the team.

Zorn was unaware of his athletic potential but decided to try football. He was initially a defensive back and receiver.

“I had no idea what I was doing, where to put my hands or my feet,” he said. “But the coach saw me throwing the ball around, and said, ‘Would you play quarterback for us until we get a guy (sent) down from the varsity?’ ”

“I thought, ‘Man, I love this,’ because I had the chance to touch the football every single play,” he said. “I loved the idea that I was kind of in charge of everything.”

Zorn was not an instant star. He played in one game as the quarterback of the sophomore team, but it was the only game the team won.

Zorn had success as a senior, having enough success to be an all-league player. But it wasn’t enough to get a scholarship, he said.

So Zorn went to Cerritos Junior College. After two seasons there, his only offer from a four-year university was a half-scholarship from Division II Cal Poly-Pomona. He gladly accepted.

A man for all seasons

It should come as no surprise Zorn is involved with the new XFL. Zorn loves trying new things. In addition to football, he threw javelin at Cal Poly Pomona and competed on the school’s badminton team.

“The track coach didn’t have a javelin thrower,” Zorn said. “I’d never done it, but I said, ‘If you show me how, I’ll do it.’ I took third in the league.”

With a half-scholarship, he needed jobs. He worked at Disneyland, guiding the canoe ride, and had a steady weekend job at Paramount Iceland that began at 5 a.m.

It was there that Frank Zamboni would test his ice-resurfacing machines.

“I would get to drive them around,” Zorn said. “I learned how to skate, but I didn’t play hockey.”

But while he had many interests, Zorn excelled most in football. His first game was an exhibition at Division I Fresno State. Shockingly, Cal Poly won 14-7, with Zorn displaying his scrambling skills.

“Our coach, Roy Anderson, comes sprinting on the field and gets in my face,” Zorn said. “He said, ‘You’re really good, and you’re going to be great.’ I had never had anybody make that comment to me. It can shock you and I tried to believe him. If that’s true, there is a big responsibility on my shoulders to do that, to be good. So I was pretty committed and I enjoyed it tremendously.”

Two years later, he was on a much bigger stage. His Cal Poly experiences had him ready.

“At Cal Poly, they didn’t care that you were an athlete; you really had to study,” he said. “That was a time to decide, ‘Are you smart and can you do this?’ I didn’t have good grades in high school because I was kind of lazy. But at Cal Poly-Pomona, I decided I was going to work at it, and I did, and I got good grades. Those couple of years were a lot of change and development.”

Zorn wasn’t taken in the 1975 NFL draft, but signed a free-agent deal with Dallas. He made the team, then was cut before the first game.

The Los Angeles Rams signed Zorn, but he didn’t dress for games, didn’t travel and wasn’t on the official roster.

“I realized they were hiding me,” Zorn said.

Seattle, which would start playing in 1976, found him nonetheless.

“The Seahawks said, ‘We want you to play for us; we want you to be the starting quarterback for the Seattle Seahawks.” Zorn said. “The first question I asked, ‘Is this an NFL team?’ ” Zorn said.

Fans in Seattle took to Zorn immediately, not only because he was fun to watch, but because of his humble and approachable personality. They loved that Zorn drove an old Volkswagen Beetle.

“Jim was the star of the team for the first couple of years, for sure, and rightfully so,” said Hall of Fame receiver Steve Largent, who like Zorn was a rookie in the 1976 expansion season.

Said Steve Raible, a receiver for the Seahawks from 1976 to 1981 and the team’s longtime radio broadcaster: “Jim was a man of the people. He got along with everybody, and always had something nice to say about people or an encouraging word.”

Zorn said his Christian faith and decisions he made beforehand kept him grounded when becoming a star at 24.

“I was going to stay true to what I believed in,” he said. “I wasn’t going to think I was such an important person — everybody was just as important. I was probably pretty boring when it came to lifestyle. I worked, and I went home.”

A coach is born

During the 1983 season, Zorn was benched in favor of Dave Krieg. Rather than sulk, Zorn helped teach Krieg.

That experience planted the coaching seed. After retiring as a player in 1988, Zorn spent nearly a decade as a college assistant, including three seasons at Utah State. Always up for a new adventure, he took up kayaking and once harbored hopes of making the Olympic team.

While working for Minnesota of the Big Ten, he finished his college degree in art.

Zorn rejoined the Seahawks for a year in 1997 as the quarterback coach, then returned to Seattle in 2001 under Mike Holmgren. Zorn, who rode his bike to games, mentored Seahawks quarterback Matt Hasselbeck, who led the Seahawks to the Super Bowl in 2005.

Zorn’s methods weren’t always conventional. Once, he brought a Slip’N Slide to help his QBs with sliding.

“He’s a terrific quarterback teacher,” Raible said. “Ask Matthew (Hasselbeck), and any of those guys who played for him. They will tell you what a great teacher he is. He has always loved the game and loved to teach. And as important as anything, he has been there.”

Zorn’s success with Seattle helped him land the offensive coordinator job with Washington’s NFL team in 2008. Two weeks later, with the team needing a head coach, it promoted Zorn.

“I believe, even today, I was in my element,” Zorn said. “I don’t want to talk about what happened. But, gosh yes, I am happy I did it. I would do it again.”

Job offers dried up, but the desire to coach remained.

“I tried to get jobs from then until I took this job,” Zorn said. “I didn’t have an agent trying to beat down walls, but I was making phone calls.”

Zorn stayed busy during the years of semiretirement.

“I didn’t just want to sit in a room in a defeated position,” Zorn said.

He and Joy, married for 40 years, traveled some. There was more time to spend with their four grown children and five grandkids, including yearly trips with the clan to Whistler for some extreme mountain biking.

Zorn worked individually with local high school and college quarterbacks, while also finding time to make repairs and do yardwork at his Mercer Island house.

“One day I was mowing the lawn and pulling weeds, and I thought, it shouldn’t be this way,” he said. “But it is this way. Deal with it. This is what it is and no one cares. What I tried to do is say, ‘What’s next?’”

When Zorn was approached with the idea of being the coach of Seattle’s XFL team, he had a quick answer.

League Commissioner Oliver Luck, who knew Zorn from their NFL playing days, made a trip to Mercer Island to try and change Zorn’s mind.

“He explained what was going on and I caught the vision,” Zorn said. “It took me three months to say, OK, I will be the head coach. (Luck) did a great job of not pressuring me, and a great job of answering all my questions.”

Zorn has tackled the job with his typical energy and enthusiasm, quickly assembling a coaching staff.

“It has a similar feeling to what was going on in Seattle in 1976 and establishing a team,” Zorn said. “I see the parallels. … It’s fun and it’s intense.”

Zorn relishes developing players, knowing the goal of most XFL players is the NFL. He won’t rule out a return to the NFL for himself, but that’s not his focus.

“I won’t be networking because I have to coach,” Zorn said. “I don’t know where it will lead, but you can’t have success if you’re looking elsewhere.”

Zorn is the league’s oldest coach, but stays in great shape and loves riding his mountain bike.

Recently, when returning a rental car to Sea-Tac airport, he put his bike in the trunk and rode back to Mercer Island.

Once Zorn was committed to joining Seattle’s XFL team, the last obstacle was convincing his wife.

“She said, ‘Z-man, you can coach this team on one condition: I don’t want to hear you whining or moan and groan about what you don’t have. No complaining about anything that the XFL is not measuring up to. If you think you can do that, let’s go.’