The once-heralded second-round pick, the man who tallied 10.5 sacks three years ago, the tackle expected to be a leader for the defensive line … is gone.

And I’m not sure it hurts the Seahawks one bit.

The Seahawks officially released Jarran Reed on Friday after failing to find any takers on the trade market. They wanted to restructure the final year of Reed’s contract for the salary-cap’s sake, but he wanted a long-term deal, the Seahawks refused, and, well, that was the end of that relationship.

On the surface, it appears the Seahawks suffered a loss given Reed’s 19 sacks over his past 42 games (he missed six games in 2019 due to suspension). The truth is, the Seahawks still have a fearsome pass rush and $8.9 million worth of open cap space after Reed’s departure. They have younger players that can fill the void of his absence.

Are they a finished product on the cusp of another Super Bowl run? Not quite. But at this point in the calendar year, the Seahawks have made typical progress.

Some thoughts on Reed: 1. That 10.5-sack season in 2018 appears to be in the anomalous realm. He tallied just two sacks the following year, and though he had 6.5 sacks last season, all but two came after the arrival of defensive end Carlos Dunlap, whose presence was thought to make getting to the quarterback easier for everyone else on the D-line. 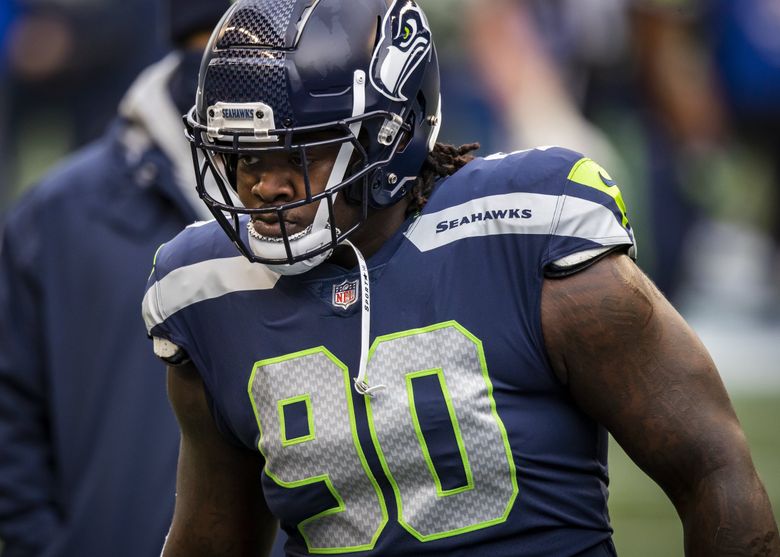 2. Reed has never been considered a great run defender. At least not according to analytic site Pro Football Focus, which regularly graded him as below average for his position in that department. Meanwhile, Al Woods, the DT the Seahawks signed after releasing Reed, has been graded as a proficient defender against the run.

It wasn’t that long ago that the Seahawks’ defensive line was considered its weakest area. This showed through the first seven games of the season, in which they tallied just nine sacks. By the end of the year they had amassed 46 sacks, good for seventh in the league.

Much of this was due to the arrival of Dunlap, who the Seahawks just re-signed to a two-year, $16.6 million deal. Much of this was also due to the return of safety Jamal Adams — who set an NFL record for sacks by a defensive back with 9.5 and will return next season. The Seahawks will also bring back defensive end Benson Mayowa, who recorded six sacks last year. And they signed DE Kerry Hyder, who had 8.5 last year.

Assuming everyone can stay healthy — which is always a risky assumption, of course — the Seahawks are OK on the pass rush.

As for its interior? Well, Poona Ford, who was productive last year, will likely see a lot more snaps. And former first-round draft pick L.J. Collier can be moved inside given his 290-pound frame. As much as anything, the Seahawks have more cap space to fill other needs, which coach Pete Carroll and general manager John Schneider have done proficiently over the past decade. In other words, losing Reed may very well be a blessing.

The past couple weeks have provided some much-needed positivity for a Seahawks organization that was drowning in drama in the preceding month. Quarterback Russell Wilson’s discontent dominated the headlines, as fear of him leaving seemed to pervade the Puget Sound region.

No, Wilson’s offensive-line complaints have not been completely quelled. But if winning is still Wilson’s primary objective, it’s hard to say the Seahawks haven’t taken strides to remain competitive.

If history is an indication, Carroll and Schneider will still make plenty of moves in the ensuing months. And if acquisitions such as Duane Brown, Quandre Diggs or Dunlap foreshadow anything, those moves could continue into the regular season.

What’s known for now is this: Reed was an asset for most of his time here in Seattle. He had a breakout season in 2018, earned his two-year, $23 million extension, and was somewhat productive last season. But he isn’t a necessity going forward.

The Seahawks’ defensive line is still one of the team’s strengths without him. Fans should celebrate his contributions here, but not mourn the fact that he’s moving on.