RENTON — Finally, three weeks after reporting to training camp, Jamal Adams fulfilled his wish to become the highest-paid safety in NFL history, signing a four-year deal with the team Tuesday worth up to $72 million.

And finally, after more than three weeks of Adams’ “holding in’’ and rumors that the two sides had reached an impasse, the Seahawks accomplished their goal of assuring that Adams will be a key part of their future for the prime years of his career.

Adams, who turns 26 in October, signed his contract Tuesday with the team making an official announcement at 1:34 p.m., just as practice began.

Adams had a helmet on as practice kicked off, officially back in the fold, and then got on the field for a few snaps — a few more, coach Pete Carroll said later, than the team anticipated in his first on-field work since the Seahawks ended their 2020 season on Jan. 9 with a loss to the Los Angeles Rams.

Carroll said the contract was the culmination of five months of what he called “intense negotiations.”

Adams admitted he breathed a pretty hefty sigh of relief when the contract was finally signed.

“This is a block off my shoulders,” Adams said. “Just so excited to be a part of such a unique organization. Always been a fan, still a fan. But it just makes it that much better that I’m a part of the family now. So I’m ready to go win some championships.”

The deal assures Adams will be a Seahawk through the 2025 season and also includes $38 million guaranteed, plus a $20 million signing bonus. 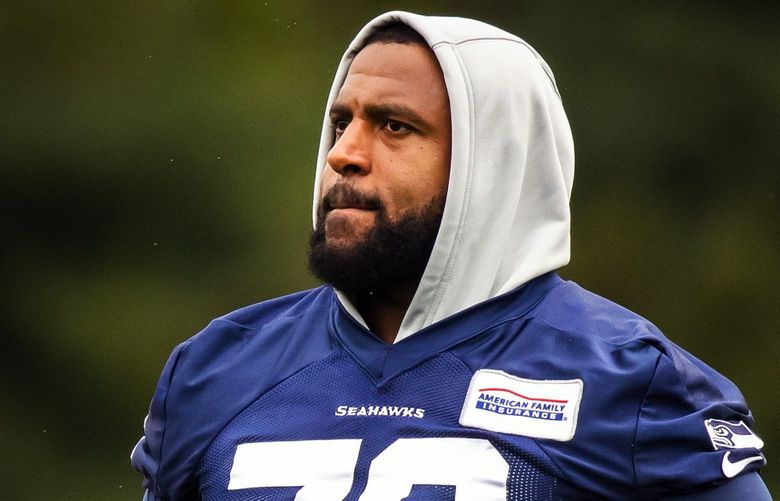 Which contracts will the Seahawks work on next after completing Jamal Adams’ new deal?

Adams said the team told him it planned to re-sign him on the day that it traded for him, July 25, 2020, and noted, “they kept their word. That’s all I could ask for.”

Still, there were some tense moments along the way.

From the day the Seahawks traded with the Jets for Adams, it was obvious he wanted to be the highest-paid safety in the NFL, something Adams felt he deserves because of his dual role as one of the team’s best pass rushers.

The Seahawks and Adams ultimately had no disagreement on making him the highest-paid safety in the NFL, though the Seahawks initially offered Adams the same per-year average as that of Justin Simmons of Denver — $15.25 million, in a four-year deal worth $61 million Simmons signed in March. Sources told the Times that Adams countered at $19 million and the two sides eventually compromised at $17.5 million, with incentives that can push it to $18 million.

Adams acknowledged Tuesday that being the highest-paid safety was a goal.

But if neither side doubted that he should be the highest-paid safety, the two sides went back and forth on other aspects of the deal, including the bonus money and structure of the contract, with Adams’ side wanting a bit more of the cash flow in the first three years.

Adams was entering the final year of his rookie contract, due to make $9.86 million. That salary was due to a fifth-year option in his contract exercised by the Jets in 2020 before he was traded to Seattle.

The Seahawks gave Adams what they told him was a final offer Aug. 6 — four years at $17.5 million annually in new money— and made clear they had no plans to budge.

They reiterated that stance when they met in person with Adams’ representatives this weekend in Las Vegas, where the Seahawks played the Raiders in their preseason opener. The contract all along included $2 million in incentives that resulted in the final potential total reaching $72 million.

The Seahawks had let Adams know they would consider using franchise tags on him in 2022 and 2023 if he did not sign the contract as offered, meaning they still effectively controlled his rights into the offseason of 2024.

Carroll seemed to acknowledge that the Seahawks gave Adams something of a take-it-or-leave it mandate, saying Tuesday, “We had to really stand our ground.”

But the two sides continued to talk and Adams said one pivotal moment came when his mother texted him Monday night “saying I needed to take the contract. Mama knows best. … When my mom says my full name, I think I need (to) pay attention.”

And if it took awhile to get to the final result, Carroll maintained confidence all along it would get done.

“He knows that it’s an enormous deal,” Carroll said. “But it’s a great deal for our franchise because this is the commitment that we made a long time ago and we were able to see it to this point.”

The incentives mean Adams’ contract could tie him with middle linebacker Bobby Wagner at $18 million annually. The Seahawks had made clear they did not want a contract for Adams to surpass Wagner as the highest-paid defensive player.

In a comment published on the team’s website, Wagner complimented the deal, stating, “It’s always good when a guy who works, really, really hard and does the stuff that he’s been able to do on and off the field gets rewarded. Since he’s gotten to our team, he’s been a huge asset to us on the field, in the locker room, in many different ways, so to have a guy like that rewarded for his hard work, it’s definitely a blessing.”

Former NFL agent Joel Corry, who now writes about salary-cap issues for CBSSports.com, said the view in the industry is that Adams got a good deal, specifically noting how much more Adams got than Simmons, $2.75 million a year if he gets the total of the contract. That compares to Wagner getting $1 million more than the previous highest-paid linebacker in 2019.

“A 15% increase from where Justin Simmons is, he wins the deal for that fact alone, because if you are talking a similar increase to what Bobby Wagner got you are in the low $16 millions,” Corry said.

But if the Seahawks blew the safety market out of the water, it’s also because they agreed with the idea that Adams is more than a safety.

Adams’ arrival led to Seattle revamping its defensive strategy and bringing defensive backs on blitzes on 21% of the time — the highest percentage in the NFL. That helped Adams accumulate 9 1/2 sacks, not only the most on the team but the most by any defensive back in the NFL since the league began tabulating sacks in 1982.

Despite wanting a new contract, Adams reported when camp opened July 27. This allowed him to avoid a daily fine of $40,000, though he sat out 13 practices before signing and taking the field Tuesday.

Adams will be eased back into action as he is also recovering from offseason shoulder and finger surgeries that Carroll had said would have limited him early in camp anyway.

Carroll said “it remains to be seen” if Adams will play in the preseason but that the goal is to be ready for the regular-season opener on Sept. 12 at Indianapolis and the team will err on the side of not overworking Adams early.

“He was involved probably more than we thought he would be today, and he had fun out there running around and trying to make his calls and all that kind of stuff,” Carroll said. “So we’re off and running.”

The contract marks the third time since 2019 the Seahawks have made a player the highest-paid at his position in NFL history.

Adam Jude: ajude@seattletimes.com; on Twitter: @A_Jude. Adam Jude covers the Seattle Seahawks for The Seattle Times.
Bob Condotta: 206-515-5699 or bcondotta@seattletimes.com; on Twitter: @bcondotta. Bob Condotta covers the Seahawks for the Seattle Times. He provides daily coverage of the team throughout the year.
View Comments
Posting comments is now limited to subscribers only. View subscription offers here. For more information, visit our FAQ's.