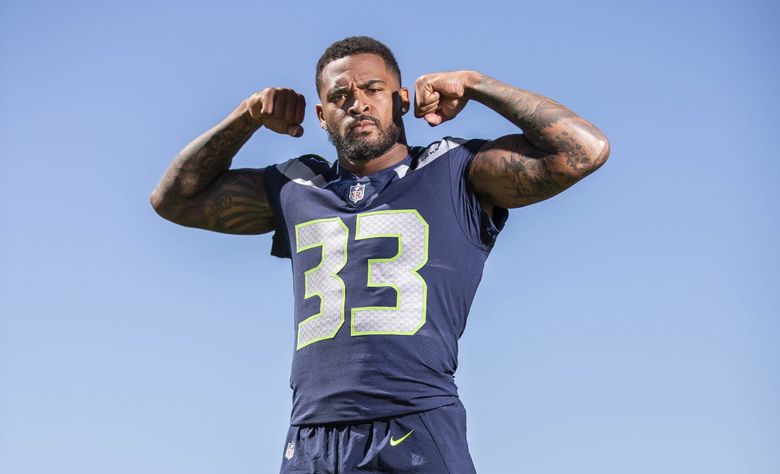 'It’s a new life, a new era and a new start.' Jamal Adams needed a fresh start. The Seahawks needed a superstar. Both got their wish.

Seahawks strong safety Jamal Adams poses for a portrait Sept. 1 at the VMAC in Renton. Adams has been emphatic about how much he appreciates his new situation in Seattle, following a contract dispute in New York that helped prompt his departure there. (Dean Rutz / The Seattle Times)

Back home in Texas, George Adams was closely monitoring Seahawks practices throughout August training camp. Or, at least, he was monitoring as closely as one can while streaming YouTube videos of the workouts on his iPhone.

He tuned in each day to look for his son, for the Seahawks’ newest star wearing the same No. 33 George wore when he played in the NFL, and for clues that reinforced his son made the right move in forcing his way out of New York this summer.

Jamal Adams, his dad is convinced, is where he belongs now, playing strong safety in Pete Carroll’s secondary. George didn’t need fuzzy YouTube practice videos to convince him of that. He could hear it in his son’s voice and see it on his face during their regular talks and FaceTime calls.

That also was obvious to observers of Seahawks practices in Renton. The boundless energy Jamal brings to the field — and the almost non-stop trash-talk that comes with it — has been reminiscent of the fiery practices during the Legion of Boom days.

Jamal, still just 24 years old, was a Pro Bowl selection in his second season with the New York Jets in 2018 and a first-team All Pro last year, and he has quickly become a vocal leader for the Seahawks’ defense. Seattle gave the Jets a massive haul — two first-round draft choices and a third-rounder, plus starting safety Bradley McDougald — to bring him here; and yes, he and the Seahawks are still very much in a honeymoon phase. But Jamal has been emphatic about how much he appreciates his new situation in Seattle, following a contract dispute in New York that helped prompt his departure there.

Now, he said, “I’m just so at peace in life. I’m excited to be part of the Seahawks organization. The guys here have welcomed me with open arms.”

The trash-talking? George laughs. Yeah, he knows exactly where Jamal — “J” to his family — got that from.

“Being a running back, I used to run my mouth all the time, too,” George said.

George was a standout running back at Kentucky, and in the 1985 draft he was the 19th overall selection by the New York Giants. When the Jets selected Jamal with the sixth choice out of Louisiana State in 2017, the two became the seventh father-son duo in NFL history to both be selected in the first round.

George’s rookie season was his best, when he rushed for almost 500 yards and added nearly 400 receiving yards, with four touchdowns for the Giants. But a freak injury in a training-camp practice the next year derailed his career. In what was supposed to be a non-contact drill, George recalls taking a handoff and getting blindsided by a defensive lineman. The hit knocked the femur ball from the connecting socket to his hip — the same type of injury Bo Jackson suffered a few years later.

George fought through severe pain to play four more seasons, winning a Super Bowl ring with Bill Parcells’ Giants in 1986, and finishing his career with New England in 1991.

He had a titanium rod surgically inserted to replace his femur, and his left leg is several inches shorter than his right. He still takes medication to manage the pain and walks with a cane.

“It’s something I’ve had to deal with,” he said. “It really bothered me more when ‘J’ was younger and I couldn’t do things to show him (on the field); that bothered me. It still affects me, but I try not to let it. There’s still pain when I’m sleeping and I try turning over, but guess what? If I had to do it all over again, I’d do the same thing.”

George never wanted his injury to cloud Jamal’s enthusiasm for football, which was evident when his son first began playing flag football at age 3. Jamal was already playing kids two or three years older than him, and George can still picture the scene of the first time his son got a handoff in a game. Jamal, of course, got the ball and ran the wrong way, and he didn’t turn around until his mom, Michelle, screaming from the sideline, was able to get his attention. So Jamal turned, looped around and all over the field, making the entire defense miss before scoring a touchdown.

George and Michelle started the GA Giants football team in Lewisville, Texas; he coached, she managed operations. They wanted to create a positive experience for kids in the community, and they wanted those kids to feel as if they were part of a professional organization. At their end-of-season awards banquet, they asked the kids to dress up in suit and tie and provided them limousine rides.

“We did it up, man. We did it up,” George said. “That’s the only thing ‘J’ knows, is first class. That’s all he knows, because that’s how he was brought up.”

George and Michelle spent two weeks in the Seattle area when Jamal first arrived here this summer. They helped him find a house on the Eastside, and made sure all of Jamal’s belongings — shipped from New York — arrived safely. The family is close, and when they’re back home in Texas, George says he and his wife talk or FaceTime with Jamal at least once a day.

“We do everything for him,” George said. “It’s not that he can’t do it for himself — he can — we just don’t want him to worry about that stuff. We want him to concentrate on football.”

“He knows everything — all the ins and outs, all the bad, all the good about me. I tell him everything,” said Jamal, the youngest of George and Michelle’s four children. “I’m very fortunate for my family, man. My family is my ‘why,’ you know. They’re the reason I do what I do, and I do it to the best of my ability. They keep me humble, they keep me working and I’m forever grateful for them.”

In interviews, Jamal has mostly brushed aside talk of a contract extension during training camp, but the expectation is he will sign a new deal with the Seahawks after the season — one that could make him the highest-paid safety in NFL history. That would make a lot of folks happy.

“I’m rolling the dice on myself and my career, and I’m happy about it,” Jamal said of playing this season under his rookie deal. “I’m all in, and I’m confident about my decision. It’s a new life, a new era and a new start.”

“Before (the trade), I saw my son — he was depressed,” he said. “Because he’s always been a winner, from little league all the way up. He hates losing. He don’t care if nobody says his name; if they win, he’s good. That’s just how he is.”

When the Seahawks traded for Jamal on July 25, he immediately posted a video on Instagram showing himself dancing and smoking a celebratory cigar. The video went viral. Two of the many viewers were George and Michelle, watching on small screens from their home.

“We just sat down and played that over and over and over,” George said. “We saw our son — and he was happy again.”

SEAHAWKS PREVIEW 2020: Before the Seahawks kick off their 2020 season, check out our special section, which takes a look at Seattle’s Super Bowl chances and previews an NFL season unlike any other. Find it in print Friday, Aug. 11.
Adam Jude: ajude@seattletimes.com; on Twitter: @A_Jude. Adam Jude covers the Seattle Seahawks for The Seattle Times.
View Comments
Posting comments is now limited to subscribers only. View subscription offers here. For more information, visit our FAQ's.