Steve and Mary Turner refuse to sit together when the Seahawks and 49ers play. They have to watch the game from separate rooms in their Creswell, Ore., home.

To cheer on her beloved Seahawks, Mary gets the main TV, the couch and the fireplace in the living room.

Her husband of 30 years escapes to a bedroom-turned-office upstairs, where he prefers to enjoy his 49ers alone. On one side of the office, on top of the TV, rests a framed picture of Steve posing with one of his all-time favorite players, Jerry Rice. 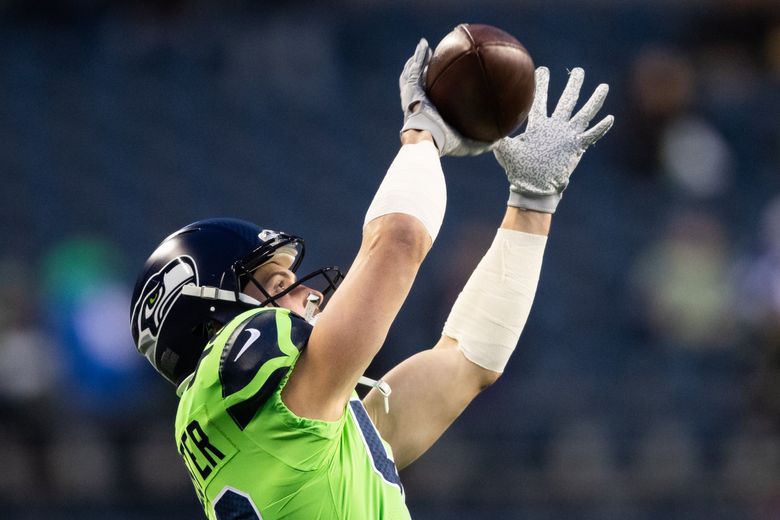 During the Nov. 11 Seahawks-49ers game, on Monday Night Football, the on-field intensity between the NFC West rivals reached a fever pitch. The intensity in the Turner home ratcheted up too.

Thanks to Jacob Hollister, the couple discovered some shared civility that night.

Steve Turner, Hollister’s coach at Mountain View High in Bend, Ore., had to root for Hollister, and never more so than when the Seahawks’ first-year tight end made a sprawling, one-handed touchdown reception on a short, floated pass from Russell Wilson.

The Seahawks’ overtime victory in San Francisco came one week after Hollister’s breakthrough performance in overtime against Tampa Bay, when he had the winning touchdown catch in the Seahawks’ walkoff victory. Teammates hoisted Hollister on their shoulders in the end zone; 300 miles to the south, another shared celebration began in Creswell.

Pete Carroll has called Hollister a “special guy,” and the tight end’s emergence as one of the Seahawks’ most reliable pass-catchers — following Hollister’s unlikely path to and through the NFL, from three colleges, a position switch, a Super Bowl experience with his twin brother, to getting traded and then released by Seattle this summer — makes him the most unexpected surprise of the Seahawks’ charge to the top of the NFC West.

Steve Turner was one of the first to recognize that potential during Hollister’s sophomore season at Mountain View. Hollister was a quarterback then, getting his first taste of varsity while pressed into action in the final three minutes of a game against an archrival. A little more than two years later, Hollister led Mountain View to its first-ever state championship in 2011, and the first football title for any school from Bend since 1940.

Hollister’s favorite target that day — every day — was Cody, his younger brother by 98 minutes.

When the boys were younger, their father would put a blindfold around Jacob’s eyes in the backyard, and then Jacob, the QB, would try to throw to a spot for Cody, the receiver, to catch it.

“I was just watching that state championship game the other night,” Steve Turner said, “and Jacob made this unbelievable throw on fourth down to Cody. It was into double coverage and it must have been 11 feet in the air — and Cody came down with it for a first down. On the very next play, we scored the winning touchdown.”

Turner added: “I always used to kid with Jake that I was giving him the keys to the car. He could call any play he wanted at the line of scrimmage. That’s how much I trusted him.”

Cody caught 12 of his brother’s throws for 146 yards in the state championship.

“One of the best memories ever,” Hollister said in the Seahawks locker room this week. “I was throwing the ball to him on every play — as usual. If I didn’t, he’d get mad at me.”

The brothers’ college careers began together at Nevada, followed by a stop together at a junior college in Arizona, where Jacob made the position switch from QB to tight end. From there, the twins veered apart, for the first time in their lives; Jacob played his final three seasons at Wyoming, and Cody went to Arkansas.

In 2017, they were both undrafted free agents — and both signed with New England. Jacob initially made the 53-man roster as a rookie, and both spent parts of two seasons there, bouncing to and from the practice squad and injured reserve.

At the team’s training-camp hotel, he waited out a nervous couple of days, his two bags packed, while his agent fielded multiple offers from other teams. Hollister said he was prepared to go anywhere but preferred to stay with the Seahawks. He signed to Seattle’s practice squad, and that’s where he remained for the first five weeks of the season.

His decision to stay proved especially fortuitous for the Seahawks, who have been decimated by injuries to tight ends Will Dissly (Achilles), Ed Dickson (knee) and Luke Willson (hamstring).

When Dissly went on IR, Hollister was activated ahead of the Seahawks’ Oct. 20 game against Baltimore. In six games since, Hollister has 36 targets from Wilson, third-most on the team behind Tyler Lockett and DK Metcalf. Hollister’s three touchdown receptions — the first three of his NFL career — are tied with those two receivers for most on the team in that stretch.

“He’s just a really good ballplayer,” Carroll said recently. “He’s tough as hell. He’s delivering blows and taking hits. Competing like crazy. It shows up. … That’s a special guy that adds to Russell — you can just tell. That’s why he’s been able to be part of this thing so quickly and, really, in a big way.”

Said Hollister: “I pinch myself all the time. I just try to have a lot of humility, and I’m really thankful to God for the path that he’s put me on. It’s been a long one and a hard one in a lot of ways. But at the same time, I’ve just been so blessed in so many ways and I’m just happy to be here now.”

The twins are on separate NFL rosters now, but of course remain close. They talk or text at least three times a day, and often more.

“We’re as close as brothers could possibly be,” said Jacob, who proudly noted that Cody — now in his first season with the Titans — had the first two catches of his NFL career last Sunday in Tennessee’s win over Indianapolis.

Back in Bend, Turner said coaches and teammates at Mountain View nicknamed Jacob “Boom Boom,” in part because he was also a thumping free safety in high school. Cody was nicknamed “Shake and Bake.”

“I’m so happy for both of them,” Turner said. “And I don’t think this is the end for them.”

Turner was watching on Monday night when the Seahawks played Minnesota, again cheering on his favorite player from his least-favorite team. He was particularly struck by how well Jacob held his own blocking an oncoming edge rusher on several occasions, including Wilson’s long touchdown pass to David Moore.

“He’s only going to keep getting bigger and better,” Turner said. “The real surprise was how well he did out there blocking folks. I was just thinking, ‘Atta boy, Jacob.’”