One of Seahawks fans’ biggest fears came true Sunday: Seattle’s defense was fully exposed, confirming pessimists’ views and really testing the optimists of the bunch (you can obviously count Pete Carroll in the latter group).

The Seahawks defense did not turn a corner, as the narrative might’ve suggested after the win over the 49ers.

The Seahawks running backs are a disaster, and getting Chris Carson, Carlos Hyde and/or Rashaad Penny back from injury at some point would go a long way.

But all is not lost! The Seahawks are still 6-2, in first place in the NFC West with more than half a season to play. They need to get fully healthy and into a rhythm, which is still possible, believe it or not.

Yes, there’s reason for hope. Russell Wilson, despite a rough game, is still Russell Wilson. DK Metcalf continues to make a name for himself, and Tyler Lockett provides an incredible 1-2 punch. Jamal Adams will work himself into shape after returning from injury, and perhaps Carlos Dunlap’s presence will continue to grow as he settles in with his new team. And, who knows, maybe Snacks Harrison will surprise when he sees the field. 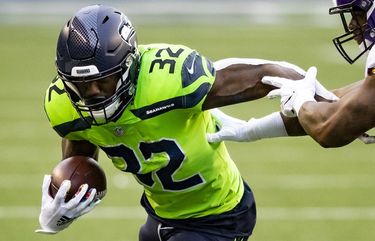 But all the hope in the world doesn’t change Sunday’s butt-kicking. Unfortunately, people noticed; there’s no hiding this clunker.

Here’s how national media rank the Seahawks after their 44-34 loss to the Bills in Week 9 (click here for last week’s rankings).

The Seahawks … were the picture of illogical coaching, at least on defense: Pete Carroll and Co. came into this matchup looking to attack Buffalo’s offense in what seemed to be the exact incorrect way, dialing up a blitz-heavy, man-coverage approach (playing Cover 0 or Cover 1 on 45 percent of their defensive snaps), which Allen predictably picked apart―as he’s done for most of the year. … Seattle is still in the hunt in the wide-open NFC after the demoralizing loss, of course, but will need to figure out a way to stop the bleeding on defense if it has any real hopes for Super Bowl contention.

Not the first time it has been said in this space, but the Seahawks’ pass defense is a problem. Pete Carroll was shocked the Bills came out passing, and the most shocking thing about that is Carroll didn’t see it coming. He better get used to it; every opponent will be passing often.

“I don’t even recognize us,” Pete Carroll said of a defense on pace to allow a league-record 7,292 yards. The 44 points Seattle surrendered Sunday were the most by a Carroll team since he was at USC.

Russell Wilson has to be perfect to cover for the sins of the Seahawks’ defense. When he isn’t, Seattle loses. Wilson threw two interceptions and lost a pair of fumbles on Sunday, and the defense was carved up by Josh Allen in a 44-34 loss to the Bills at Orchard Park. Seattle repeatedly sent extra rushers at Allen, and despite landing seven sacks (a season high for both the Seahawks and Allen), Buffalo piled up chunk plays when the pressure didn’t get home. Quinton Dunbar was picked on all afternoon before mercifully being benched in favor of Linden Stephens in the fourth quarter. After an encouraging performance against the Niners, it’s back to the drawing board for Pete Carroll and defensive coordinator Ken Norton.

It’s hard to expect much more than that given how bad their defense has been, particularly in their 44-34 loss to the Bills on Sunday. But an NFC West title is still a realistic expectation given that the Seahawks have a one-game lead, not to mention the division’s best quarterback and the NFL’s highest-scoring offense. It also helps that their second-half schedule includes games against the Eagles, Giants, Jets and Washington Football Team, who are a combined 7-26-1. A 12-4 record is well within reach, and there’s a strong chance that would be good enough to win the NFC West.

The defense is terrible right now. That puts way too much pressure on Russell Wilson and the offense.

Sports Illustrated: Tied for No. 7 (with the Bills)

Russell Wilson has been magical, but—paradoxically as this may sound—he may not be able to take home that much-discussed first career MVP award if the defense doesn’t help him win some more games.

The Associated Press: No. 7

Editor’s note: The Associated Press doesn’t write blurbs for its rankings, but I thought you’d want to know the ranking anyway.

Alex Iniguez on Twitter: @alexiniguez. Alex Iniguez is an Assistant Metro Editor at The Seattle Times. After arriving in Seattle in the summer of 2018, he spent two-plus years as Assistant Sports Editor. He spent the previous seven years at the Pittsburgh Post-Gazette and is a graduate of the University of Illinois.