The project that Tariq Woolen was considered to be when the Seahawks drafted him in the fifth round in April might not take as much time to complete as some have expected.

That Woolen played just two years of cornerback at University of Texas-San Antonio had many thinking he would need a while to adjust to the NFL game despite out-of-this-world measurables (the 6-4, 210-pounder ran a 4.26 40 at the NFL combine).

But when the Seahawks held their mock game Saturday at Lumen Field, Woolen got the start at right cornerback. And while that came because regular starter Sidney Jones IV was out with a concussion — Artie Burns moved to Jones’ usual left-side spot with Woolen then on the right side — Woolen looked like he belonged from the first play to the last. 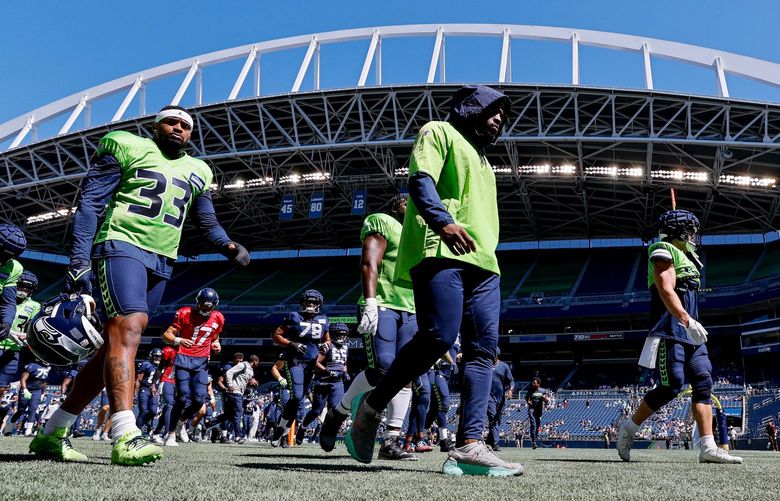 Woolen momentarily appeared to have an interception on a Geno Smith pass to equally speedy Marquise Goodwin in the first half, protesting later that he thought he’d caught it before it was ruled incomplete.

“I think I did,” Woolen said. “I am going to say I picked it off. On the stats sheet it may not show up, but I feel like I did. You know one day when the game actually counts, it’ll be on there.”

He also deflected a Drew Lock pass in the end zone to Cody Thompson that then had a fortuitous bounce for the offense right into Thompson’s hands for a touchdown.

“Honestly, I thought I did a good job,” Woolen said. “It was still good coverage, but you’ve got to finish the play. I was thinking the ball may have went out of bounds. I was just looking for it and the next thing you know I turn around, and he’s lying on the ground like this with the ball and I was like, ‘Oh wow.’ It was just a good play though.”

And he also looked steady in run defense, at one point perfectly reading the play when Smith faked a handoff and kept it, teaming with Cody Barton to turn the play into a four-yard loss.

“He had the misfortune on the ball, I think he was tipping the ball away and it was a really nice job of Cody coming down with the football, but it was a nicely defended play, too,” coach Pete Carroll said later. “He had a couple of challenges and almost had a pick down there, too. This was really good work for him, he was out there with Quandre [Diggs] and Jamal [Adams] hollering at him and getting him lined up. It was a really profitable day for him.”

And it appeared to be a pretty big vote of confidence for how far Woolen has progressed that he got the start ahead of fellow rookie Cody Bryant, who was the Jim Thorpe Award winner last year at Cincinnati and had generally been considered as likely to see the field quicker this year than Woolen. Bryant worked with the second team all day at left cornerback with Michael Jackson on the right side.

“It’s been pretty smooth, I’m not going to lie to you,” Woolen said of his adjustment to the NFL. “As a rookie, you just have to find your way. As much as the coaches trust me, I just keep trying to buy in, knowing that you have to trust the process. Whenever they ask what you’re working on today, or this day, I just try to keep pounding the rock, keep pounding on it, and just make sure every day I keep getting better. The more that I do that, the more comfortable I feel, and the more my teammates trust in me too. I just believe I’m more comfortable.”

Officially, the right-tackle position is a three-man competition between rookie Abraham Lucas and second-year players Jake Curhan and Stone Forsythe.

But if the lineups Saturday mean anything then Lucas might have a lead on the job for now.

Lucas played right tackle with the starting offense throughout the mock game, with Jake Curhan working at right tackle and Forsythe at left tackle on the second team.

Lucas, who was the 72nd overall pick out of Washington State, had been working with the second team throughout practices until Friday, when he also lined up with the first team throughout.

If Lucas wins the job then it would give Seattle rookies at each tackle spot with first-round pick Charles Cross having been entrenched as the starter at left tackle since Day One.

Asked how the two rookies played Saturday, Carroll said he needs to watch the film.

“I don’t have anything for you,” he said. “Although, overall, we hung in there nice with the pass protection with those guys in the first group. I have to wait and see. This is really important on those guys, I can’t wait to see these guys.”

— Seattle suffered only one injury when defensive lineman L.J. Collier left with what Carroll said was a “tweaked elbow.”

— Jamal Adams played with the first unit with his left hand still heavily wrapped. Adams at times lined up as a linebacker when Seattle went to a three-safety defense, with Josh Jones joining Quandre Diggs in the back end.

— Rookie Ken Walker III got the second kickoff return after DeeJay Dallas got the first one, indicating the team remains intrigued by his potential in that spot. He did not return kicks last year and hasn’t since the 2019 season when he was a freshman at Wake Forest. Freddie Swain took the first punt return.

— Third-year edge rusher Darrell Taylor wasn’t credited with a sack but was a continual presence in the backfield, continuing what has been a solid start to camp.

— Middle linebacker Jordyn Brooks, nursing a hamstring injury, didn’t play with Iggy Iyiegbuniwe filling in for him alongside Barton at inside linebacker.

— Former Seahawk Richard Sherman was on hand for the game, on the field beforehand talking to some players and staffers as well as Carroll.