Maybe the best way to delineate the Seahawks’ 2020 season is this: BB and AB.

Before Buffalo and After Buffalo.

Their 44-34 loss to the Bills in the eighth game of the season was undoubtedly both a low point and a turning point. It was more points than a Pete Carroll Seahawks team had given up, and seemed to be proof of a growing reality: The Seahawks simply did not have the defensive chops to compete at the highest level.

“I don’t recognize that game,” a shellshocked Carroll said afterward. “We haven’t seen us look like that. It’s a game I don’t have any place in my brain for it.”

I speculated on the job security of defensive coordinator Ken Norton Jr. Fellow columnist Matt Calkins wrote, “What was once a heavy concern has become a complete embarrassment. What was once a problem is now a full-blown disaster.”

It’s not hyperbole to say the Seahawks’ season hung in the balance, despite a deceptive 6-2 record. Which is all a prelude to this statement: Seattle’s defensive turnaround in the second half of the season — ever since the Bills debacle — is one of the signature achievements of the Carroll era.

Entering Saturday’s playoff opener against the Rams, amazingly it’s the Seahawks offense, and not its defense, that is causing the most trepidation. Their defense, so maligned for half the season, has morphed into a stout — and reliable — unit that ranks among the best in the NFL, AB.

“I’m thrilled about the fact that we’ve just continued to crescendo,” Carroll said Sunday after the victory over San Francisco that closed the regular season with four consecutive Seattle victories, and six out of seven. “We have continued to play solid football and keep the points down. I’m ready to play anybody. … They are really excited about where they are and where they came from and to be out of that mess.”

Even in the darkest times, in the height of the “mess” to which Carroll referred, the coach kept insisting that the Seahawks had a competent defense, hiding in plain sight. 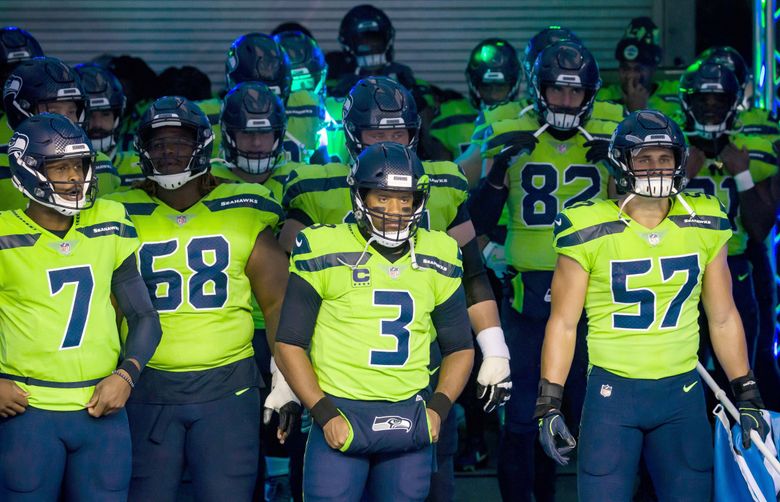 It seemed like the height of wishful thinking, or a Hail Mary attempt to speak it into existence. But the turnaround has been profound. After the Buffalo game, the Seahawks had given up 243 points in eight games, an average of 30.4 per game. They had yielded 3,646 yards, an average of 455.75 per game, far and away the worst in the NFL.

In the eight games since? Opponents have scored 128 points — 16.0 per game. That’s a 47 percent improvement. Yards allowed over that span have dropped to 2,443 — 305.4 per game, a decrease of 150 yards each contest. To put it another way: The Seahawks are keeping teams from making 1½ full trips up and down the football field over the course of each 60 minutes.

Who saw the transformation coming? Besides the coaching staff, veteran players such as Bobby Wagner and K.J. Wright were instrumental in keeping the defense from disintegrating. Carroll has cited their leadership as a key factor in fostering the improvement. Both could draw upon the glory years when Seattle’s defense routinely was regarded as the best in the NFL, and for a stretch was rated among the best in history.

“This defense and Seahawks — it’s always been a special place to where defense and Seahawks, it’s got to be at the top,” Wright said. “You’ve got to be the best. We knew that early in the season, the offense was scoring all those points and helping us out a whole lot. And it just left a sour taste in my mouth. So we just really addressed the accountability across the board. We addressed effort at times. Once we got that figured out, and once we got the communication figured out, things have been how they should be.”

By all accounts, the seminal event in improving the communication was an “accountability meeting” held by Norton after the Buffalo game. Each player on defense was called upon to explain his role and responsibilities in various formations. Carroll called it the “best (meeting) I’ve ever seen.”

Certainly, after the heat he took, Norton deserves commensurate praise for the turnaround.

“He put in overtime, putting in ways to make sure that each guy was in a successful position,” Wright said. “His leadership has been outstanding.”

Many things came together simultaneously for the Seahawks after Buffalo. Several key players returned from injuries, including safety Jamal Adams and cornerback Shaquill Griffin. Cornerback D.J. Reed, a late acquisition from the 49ers, recovered from a hip injury and helped stabilize the secondary. Carlos Dunlap arrived in a trade from Cincinnati to energize the pass rush. The Seahawks had 12 sacks in the first eight games, and 34 in the next eight.

To be fair, it must be pointed out that they also had a stretch of games against losing teams and subpar quarterbacks. But that doesn’t minimize the staggering amount of improvement that’s taken place — just as Carroll predicted when few believed him.

“What gave me the confidence to hold on to that is years of coaching, watching guys do stuff and knowing that what you see isn’t always what you’re going to get,” Carroll said this week. “We had a lot of things to put together that hadn’t yet been coalesced, so it was going to take some time.

“Confidence in the coaches, confidence in the players, the playing ability of the guys, being able to see them but not seeing them play well together yet. It just took us some time, maybe longer than normal. But I had never seen us be that bad, and so I knew that that wasn’t the way it was going to be.”

Carroll hastens to add that there’s still considerable improvement to be made. And new injuries to Adams and Jarran Reed are a significant concern entering the playoffs. But compared with the depths to which the defense had sunk, it’s a whole new world. Now they are the ones feeling the obligation to carry the load while the offense scuffles.