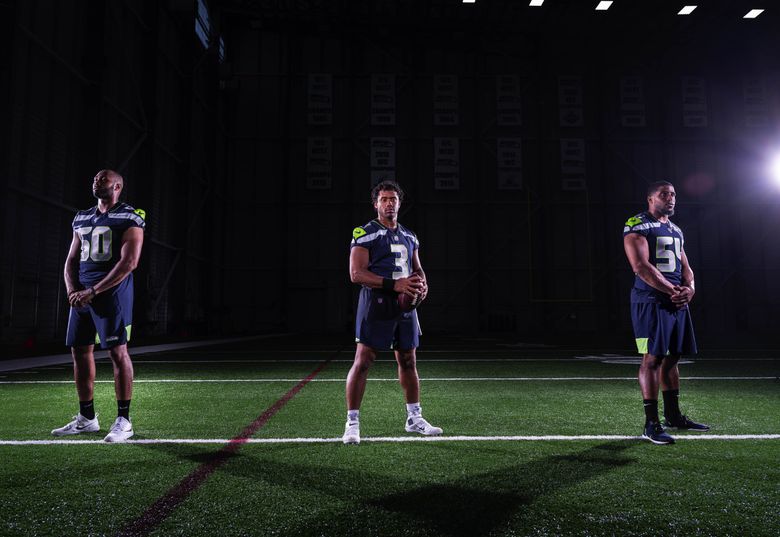 The road back With Russell Wilson, K.J. Wright and Bobby Wagner, the Seahawks built a Super Bowl champion. Now that their contracts are settled, the question now is whether Seattle can build one again.

Each one represents one of the Seahawks’ draft classes since Schneider arrived in 2010 as the team’s general manager working alongside coach Pete Carroll, one frame for each draft class containing a picture of every draftee taken that year.

Included are some of the biggest draft hits in NFL history, three of whom still form the core of the Seahawks: quarterback Russell Wilson and linebackers Bobby Wagner and K.J. Wright, the only three draft picks remaining from the team that won the 2014 Super Bowl.

Also included are picks the Seahawks have missed on during his tenure, names and faces of players drafted with the same high hopes as a Wilson, Wagner or Richard Sherman, who instead are now forgotten by all but the most avid of Seattle fans.

Analysis: Winning a Super Bowl with much of the salary cap tied to Russell Wilson is tough, but not impossible

Every day, Schneider looks at those pictures and wonders what he and his staff could have done differently then — and if there’s a lesson to be learned for the next time.

Each picture serves as a constant reminder that for all the Seahawks have accomplished in his tenure — the only Super Bowl title in team history, seven playoff appearances in nine years, the fourth-best record in the NFL since he arrived behind three teams that already had franchise quarterbacks in place at that time (New England, Pittsburgh and Green Bay) — the job is never done.

“How’d I screw that one up?” Schneider says with a wry laugh, repeating what he often finds himself asking.

But in general, there have been far more hits than misses, Schneider and Carroll not only building one Super Bowl champion but, last year, showing they may be able to do it again.

In a season when some NFL pundits thought the bottom was about to drop out following the losses of the likes of Sherman, Michael Bennett and Kam Chancellor, the Seahawks instead won 10 games and earned a playoff spot, appearing to successfully turn the page from the Legion of Boom era.

And in the offseason, they re-signed Wilson and Wagner to keep in place the most vital player on each side of the ball, taking a big step toward solidifying the future.

Wilson has compared where the Seahawks are now to where they were in 2012 — a young team on the rise, spurred by the motivation of a tough road playoff loss and ready to take the next step.

Therein lies the question of this season — did last year’s double-digit wins show that Seattle is indeed ready to embark on another Super Bowl run, having successfully remade its roster around its Wilson-Wagner core?

Or, instead, did 10 wins — four coming by three points or fewer, tied for the most of any team in the NFL — help mask that there remains a tough road ahead, especially with the Los Angeles Rams looking like they’re not disappearing anytime soon?

If it’s the former, and the Seahawks are indeed ready for another deep playoff run, then it will only further burnish the reputation of Carroll and Schneider — a pairing that can be fairly judged as the best coach/general manager team in Seattle sports history.

Schneider, asked if he feels the Seahawks are really ready to again contend for a Super Bowl, says it’s a question he can’t answer.

But then, he also said he couldn’t have answered it in the summer of 2013, when the Seahawks were generally considered the favorite to win the Super Bowl, and then did just that.

“I never do (feel comfortable with where the team is),’’ he says, noting that Paul Allen — the team’s owner from 1997 until passing away in October and leaving the team in a trust led by his sister, Jody — would ask him before every season what he thought the team’s record would be.

Cheat sheet: What you need to know about every game on the Seahawks' 2019 schedule

That feeling is in line with what he calls “a natural anxiety about me,” a personality trait that has turned out to be a perfect complement to Carroll’s seemingly boundless optimism and endless enthusiasm.

When Carroll was hired in 2010, he wanted more say in personnel than he’d had in previous NFL head coaching stints with the Jets and Patriots, where he basically hadn’t had any.

But neither he nor the team wanted him to have to take on all the vast responsibilities of a general manager, which led to the decision that once Carroll was hired, he could essentially hire the general manager from a list of four the team was already considering.

That, ultimately, led to hiring Schneider, then 38 and who had yet to be a general manager but had earned a reputation around the NFL specifically for his work with the Packers. He was Green Bay’s director of football operations when he was hired by Seattle, and Schneider and Carroll barely knew each other.

That pairing has gone well, evidenced not just in their on-field success, but in Carroll’s decision last December to re-sign for two more years, keeping the two of them together with the Seahawks through at least the 2021 season.

“He said, ‘I’m looking for someone to have this great marriage with, you know?’’’ Schneider recalls. “He’s like, ‘I want this to be the best head coaching/general manager marriage in NFL history.’ And that’s really what it’s been.’’

Schneider compares their working relationship to a literal marriage, joking, “It’s like, ‘Are you going to pick up the kids tonight?’ There are constant little negotiations along the way every single day. We’ve always done that.’’

One mantra Schneider says they have stuck to that’s helped is “no egos” — neither one getting caught up in whom to credit for success, or to blame for failures.

They’ve also each stayed in their lane.

It’s Carroll’s job to tell the 53 players who make up the regular-season roster they are essentially the greatest 53 players ever assembled at any one time in NFL history, able to accomplish whatever is asked on any given day.

“We both talk about what our mindsets are and that we have completely different jobs,’’ Schneider says. “His job is to instill confidence in these guys every single day and to be teaching and coaching and developing and our job is to be looking long term and trying to improve every single position, every single day.’’

That dynamic — balancing winning now against the long-term good of the franchise — can be difficult to navigate when jobs are always on the line.

“Sometimes a head coach isn’t going to see it the way a general manager is going to see it,’’ Schneider said. “But he has the experience to know what things look like long-term and how that affects the organization.’’

It helped that Seattle got good pretty early in the Schneider/Carroll era. Trickier has been staying there, though having an elite quarterback means the Seahawks always have a fighting chance.

The early years of their tenures may also have been a little easier, when the roster was essentially a blank slate, a new coach and GM weren’t beholden to any of the players, and a team that had won just nine games in the previous two seasons was ripe for a makeover with fans understanding it might take a little time.

Then, it was simply about trying to find as many of the best possible players to compete at each position and letting them have at it.

But in the years from 2013 to about 2017, when the Seahawks had what was unquestionably one of the most talented rosters in the NFL each year, the task of adding to it became more challenging.

“So from a scouting standpoint, we had to readjust a little bit and say, ‘We have to find the core makeup of that player that wants to come in and take Kam’s job or take Earl’s job or Richard (Sherman’s) job,’ that sort of thing.

“That was something that we had to work through and kind of review. Every team talks about grit now and having those guys on your team who overcome obstacles and all that kind of stuff that we talked about right when we got here.’’

That, in turn, led to it being a challenge for Carroll to maintain the same “culture of competition’’ that carried the team in its Super Bowl years.

“Pete preaches competition every single day,’’ Schneider said. “But it’s hard to get in front of the team every single day and be preaching that when you have the highest-paid starting strong safety and the highest-paid free safety and the highest-paid left cornerback in the league. So that was something that we had to get through from a scouting standpoint and Pete handling that. From a scouting standpoint talking about players who can come in and play with those guys and contribute and compare that to Pete’s challenge of ‘Hey, it’s all about competition.’’’

That’s not a problem anymore in what is now the first year since Carroll and Schneider arrived without Chancellor, Sherman or Thomas on the roster. Those three, along with other Super Bowl stalwarts, such as Doug Baldwin, Bennett and Cliff Avril, have all departed in the last two years.

But if successfully preaching a culture of competition is no longer an issue, whether there is the same talent level and locker room leadership remains an unknown.

The three draft picks left from the team that won the Super Bowl, though, are optimistic.

“We definitely miss those guys,’’ Wright said during training camp, referring to the likes of Baldwin and Thomas, the latest of the Super Bowl core to depart. “But we know the nature of this league is that it’s new every year. So the guys who are still here got to continue it, got to lead it and make sure that the standard stays high.’’

Wright is reminded of that standard every day when he looks at a few pictures of his own — large photos of the team’s greatest moments from the Carroll-Schneider era that adorn the hallways at the VMAC in Renton.

“Those were good days, man,’’ Wright said of the two Super Bowl years. “I miss it. I was talking to Bobby the other day about where this team is going, the next steps, and we predict great things for us. We predict greatness. And we’ve got to get back to it. I’m confident in our defense, confident in our scheme. I think we will really show ourselves and a lot of people just how good and talented we are. We’ve got a lot of new stuff that I can’t wait to put out there on Sundays. It’s going to be fun.’’

But on this day, as with every other day, he says he walks into the office asking himself a simple question: What do he and his staff need to do to “get back to being a world champion”?

Just how much work there may be left, he’ll soon find out.