The sessions are the first time in the offseason program the Seahawks can have their offense go against their defense in 11-on-11 drills — and the first time they’ll have done full team drills since 2011 without either Wilson or Wagner.

The Seahawks have been in phase two of their offseason program the past three weeks, during which the offense and defense have been able to work on the field but not against each other.

Monday’s workout will be the first of 10 OTAs for the Seahawks, who host a mandatory minicamp June 7-9. 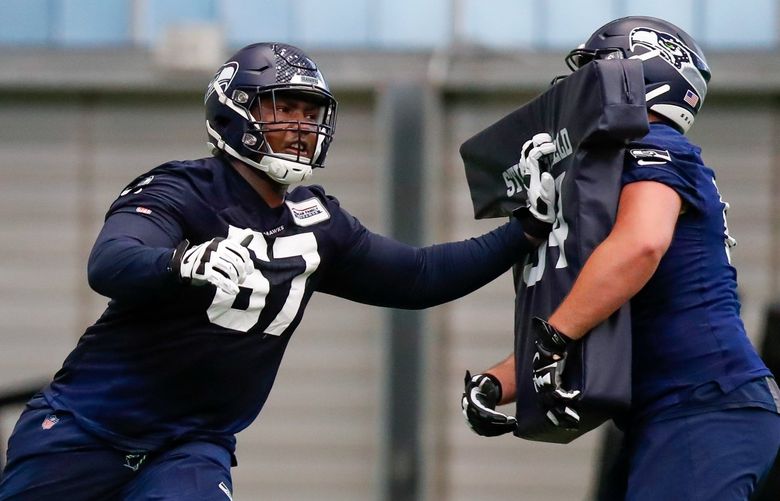 What kind of team did the Seahawks build? We’ll start to find out at OTAs on Monday

The 13 workouts will help set a foundation before the team breaks for the summer and returns for training camp in late July.

Monday’s is one of three OTAs open to the media, and here are five things we’ll be watching.

There’s a long way to go in the competition between Geno Smith and Drew Lock to replace Wilson (and to see if Jacob Eason has a shot at getting into the mix). But that battle begins to ramp up with the first 11-on-11 work either will do this spring.

Smith is the leader in the clubhouse. But with nothing other than offense-only drills so far, that’s to be expected. Smith has three years experience with the team and started three games last year and is a popular locker-room presence and deserves the shot. And given all that, the Seahawks want Lock to earn the job with his play and not just have it handed to him.

But any suggestion anyone has a lead to start the opener Sept. 12 against Denver is premature without a single 11-on-11 drill having yet been held.

The next few weeks will begin to tell a little truer tale, though this is a battle that figures to go deep into August if not longer.

First-round pick Charles Cross can be penciled in as starter at left tackle — certainly, that’s everyone’s expectation for a player taken ninth overall.

The one real battle figures to be at right tackle between third-round pick Abe Lucas and second-year player Jake Curhan, who started the final five games of last season.

Just as important is forming the teamwork and communication needed to be a successful front, and something that will be a challenge without the presence of veteran left tackle Duane Brown for the first time in five years.

Aside from quarterback, cornerback might be the most intriguing competition with the starting spots on both sides appearing somewhat open.

Second-year player Tre Brown might have a leg up on the left side, but he is coming off knee surgery in November. Fourth-round pick Coby Bryant played the left side in rookie minicamp and has a chance to make an impression over the next month. Veterans Sidney Jones and Artie Burns are also in the mix and it’ll be interesting to see where each lines up.

Fifth-round pick Tariq Woolen was on the right side during rookie minicamp but nursing a slight hamstring injury. Justin Coleman presumably is the leader at nickel, but last year’s starter, Ugo Amadi, remains in the mix and it’ll be interesting to see who else slots in there.

Expect the Seahawks to keep any changes they are making to the defense under wraps. And it’s worth remembering that safeties Quandre Diggs and Jamal Adams remain in recovery mode from offseason surgeries, so fully implementing the parts of the defense that showcase Adams in particular might be on hold.

Still, the process of integrating the new 3-4 aspects of the defense becomes more serious going up against an offense.

These sessions might be especially critical for the inside linebacking duo of Jordyn Brooks and Cody Barton to establish themselves as leaders in the middle of the defense with Wagner gone.

How will the receiving position shake out with addition of Marquise Goodwin?

Seattle enters the season with three sure things at receiver — Tyler Lockett, DK Metcalf and Dee Eskridge, a second-round pick a year ago whose role on the team might still be determined but whose spot on the roster isn’t. Despite a disappointing rookie year due in large part to a concussion, he’ll get every shot this year to prove worthy of his draft selection.

But the receiving spot got a bit more intriguing Sunday when it was learned that Seattle plans to sign veteran Marquise Goodwin. The Athletic first reported the signing with a source confirming to The Seattle Times that the signing was expected to happen.

Goodwin will now join holdovers Freddie Swain and Penny Hart and seventh-round picks Bo Melton and Dareke Young in battling for spots at the back end of the receiving position.

Seattle has usually kept five or six receivers on its 53-man roster and then three or four more on the practice squad, so all could find their way onto the roster in one way or another next fall.

Melton and Young will be intriguing to watch as OTAs begin. Melton’s special teams prowess has been thought to give him a leg up on a roster spot.

Young played at Division II Lenoir Rhyne and as such might be considered more of a project than Melton, who played at Rutgers. But that will become clearer over the next few weeks.