The Seahawks had said they would keep in-house how they planned to protest before the game Sunday and bring light to issues of social injustice and police brutality.

Ultimately, they decided on a mixture of actions united with the Falcons and letting players express themselves individually.

As Seattle’s Jason Myers kicked off to start the game, all 22 players took a knee and the kick was not returned.

Before the game, the Seahawks and Falcons stood at the goal lines of their respective end zones during the playing of “Lift Every Voice and Sing.” The NFL announced that the song, commonly referred to as the Black national anthem, would be played before every game during Week 1 of the season.

But during the playing of the national anthem, Seahawks players were on the sideline (some teams have stayed in the locker room) each expressing themselves how they felt most comfortable.

A few players sat, including safety Quandre Diggs, and a few others kneeled. 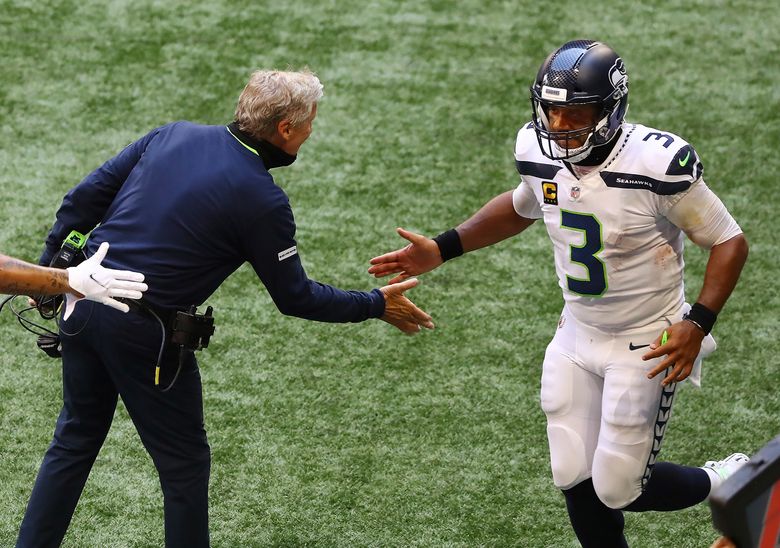 Newly-acquired safety Jamal Adams raised a right fist throughout the song, reminiscent of John Carlos and Tommie Smith at the 1968 Olympics.

Several other players were shown standing with hands on hearts.

Adams said later in a Zoom session with media members that he “kind of went back and forth” with what he wanted to do during the anthem.

Adams decided on the raised fist, he said, because “I wanted to not only stand strong, I wanted to show that I’m a Black man and I’m proud to be Black. That’s what I kind of wanted to show with my fist held high.”

“I thought it was a really good statement by both teams to make a statement,” Carroll said. “And we don’t know how much we can do to help but we’re going keep trying.”

“Coach Pete Carroll did a hell of a job, and he’s always been doing a hell of a job as far as just giving us the freedom to be ourselves and to use our voice, use our platform,” Adams said.

The Falcons paid tribute to civil-rights leader Rep. John Lewis, who died July 17, by making Lewis their honorary captain for the game, per the NFL Network’s James Palmer. Both teams wore white armbands with the initials J.L. to honor Lewis.

Wilson stood for the anthem in what appeared to be a prayer circle with Seattle backup quarterback Geno Smith and a coach.

Both teams also united for a pair of actions before the game or at its start.

Wilson said he did so in thinking about his 3-year-old daughter, Sienna Princess Wilson.

“We need justice for Breonna,” Wilson said later via Zoom. “We need people to step up and we need leaders in our country to be able to step up and make a change for these kind of situations. And when I think about my daughter I get fearful because of a young girl like Breonna having her life taken away. It’s pretty difficult.”

Editor’s note: The Times declined to send reporter Bob Condotta to Atlanta for this game because of COVID-19 safety concerns.