A rare find was swimming deep in the Puget Sound last Wednesday.

Phallon Tullis-Joyce will insist it was the Pacific spiny lumpsucker, a bony fish with a suction cup pelvic fin that helps it attach to surfaces. But for those roaming land, it’s Tullis-Joyce herself.

In scouring the globe for talent, the OL Reign found a native New Yorker in Reims, France, who could be the team’s next star goalkeeper. Tullis-Joyce, 25, has already shown her potential in helping the Bold reach the knockout rounds of the NWSL’s Challenge Cup. 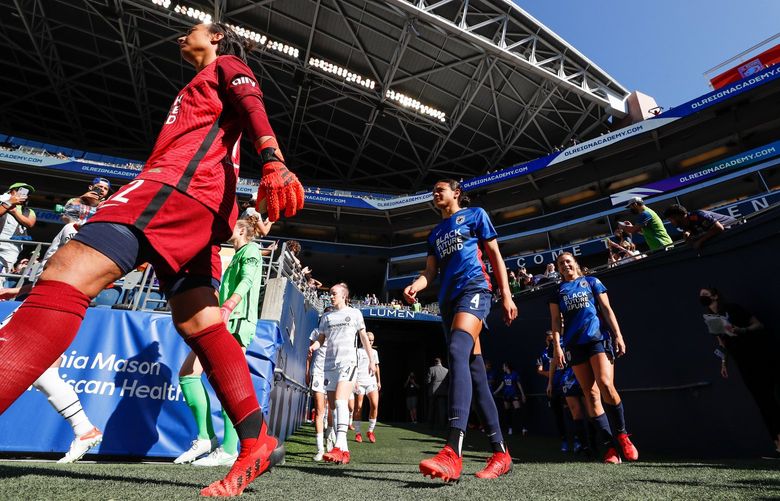 With move to Lumen Field, OL Reign get set to embark on a new era in Seattle

On Sunday, the Reign, with Tullis-Joyce as their first-choice keeper, will begin the regular-season slate with the goal of winning the organization’s first NWSL title. The league opened its 10th season Friday and the Reign play their season opener on the road against the defending league champion Washington Spirit at Audi Field.

The trip includes a Challenge Cup semifinal match against the Spirit also at Audi Field on Wednesday, making last week the final chance of the month for Tullis-Joyce to scuba dive in the Puget Sound.

“Any chance I get, I’m pretty much out in the water,” Tullis-Joyce said moments after her latest dive, which was part of her SSI Diver Stress and Rescue certification process. She’s also a volunteer scientific diver and educator at the Point Defiance Zoo & Aquarium. “I just found one of my favorite marine animals in the Puget Sound, the Pacific spiny lumpsucker. I’m super stoked. They’re adorable.”

Tullis-Joyce majored in marine biology as a student-athlete at the University of Miami. She nearly dismissed the thought of playing professionally as an undergrad to follow her equal passion of everything oceanic when asked why she wouldn’t at least try a pro career in goal since the possibility has a shorter life span than a fish without water.

That decision led Tullis-Joyce to France despite entering the 2019 NWSL college draft. Stade de Reims offered her a tryout — not a guaranteed contract and was a D2 Feminine team.

Tullis-Joyce earned the starting spot and quickly learned French to communicate better with her back line. She started 34 matches through all competitions in her nearly two seasons, helping Stade de Reims get promoted to D1 where they played against famed teams like the Reign’s parent club, OL, and Paris Saint-Germain.

The Reign signed Tullis-Joyce in April 2021 to a contract through 2022. She played behind English international Karen Bardsley and French international Sarah Bouhaddi, who were both on loan last season, not getting any game time until the final minute of the season finale road win against Kansas City.

But Tullis-Joyce always had her gloves on for matches and stayed ready — even while on the bench. Reign coach Laura Harvey, who rejoined the team in August 2021 for her second stint as leader, knew Tullis-Joyce could earn the spot this year.

“I’d watch her in goal and the saves she would make in the warmup when our players were trying to get confidence to get goals before the game, she’d just pull saves that were phenomenal,” said Harvey of the gameday drills last season. “And then what she did in training on a daily basis and how she applied herself, the stuff she’d do after, the work she’d put in with (keeper coach Ljupco Kmetovski) away from the team just showed how serious she was about it. That was when I really thought she could be the No. 1.”

Watching Tullis-Joyce trot out for matches is like seeing her other favorite animal, the peacock mantis shrimp (which is really a stomatopod). The colorful crustacean is unassuming in its power and vision that has helped design military armor.

Tullis-Joyce is a lithe, 6-foot-1 keeper who’s a menace in goal. She’s made 19 saves through the Challenge Cup group stage and won NWSL Save of the Week honors three of the four weeks. There’s no mercy in training, either.

“Phallon is one of the most gentle souls you’ll ever meet,” Reign forward Ally Watt said of Tullis-Joyce’s off-field persona. “But when we’re on the field, I’m just yelling at her the whole time to get out of the goal because she keeps saving all my shots. She’s amazing and she has grown so much from last year to now.

“She’s making me a better goal scorer in training now because I can’t just fake an upper 90s goal anymore because she’s going to save that, too. I’ll have to get more creative with my shots. She’s amazing and she has brought so much and hasn’t reached her peak yet.”

“I love to frustrate forwards left and right,” Tullis-Joyce said. “It’s one of the greatest joys, seeing a forward have their hands on their head and their jaw dropped and being like, ‘How did she just do that?’

“But honestly, I’m just learning so much from the offensive line that we have on the team. Everyone is just so skilled, so technical and tactical that every day, I’m learning from them.”

The Reign are favorites to win the NWSL championship. The team lost in the semifinals at Cheney Stadium last year. This season they’ll play matches at Lumen Field, including the Challenge Cup title match May 7 — should they advance.

Being part of an elite roster, whose organization is equally invested in social/environmental causes as winning, is a big reason Tullis-Joyce signed with the Reign. Spending off-days in the Puget Sound is a bonus she’s soaking up.

“Her trajectory is wherever she wants it to go,” Harvey said. “She has the tools to be world class. She has them in her and she’s showing that. The best thing about her is she’s never satisfied ever, like even to a fault sometimes. She always, always, always wants to do better. That mentality and attitude will push her to the heights she wants to go, wherever that is.”