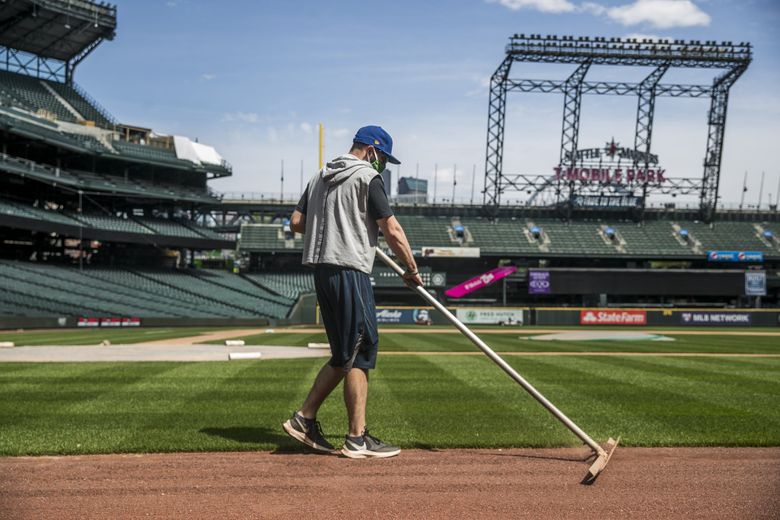 A member of the groundscrew at rakes the infield dirt at T-Mobile Park on Monday, May 11, keeping the field ready for a potential return to baseball. (Amanda Snyder / The Seattle Times)
By
Seattle Times staff

It wasn’t supposed to look like this. As Seattle awakes from its grey, dreary winter malaise, the sun of spring typically brings with it an endless array of sports at all levels, along with droves of eager fans. Now, those athletes are confined to at-home exercises and Zoom conferences, while their fans are left with re-runs of games in better days, dreaming of when sports will return, and how that will even look.

Now, due to the novel coronavirus, everything is different. Sports have been put on pause for more than two months, and while some proposals have been reported about leagues returning in the summer, the hiatus has left a void the size of an empty football field in its wake.

Spring typically belongs to baseball and in another world, the Mariners would be nearly 50 games into their 2020 season. There is still hope that a condensed season could be played, as owners have approved a proposal to resume play in July without fans. The proposal, which includes strict health and safety stipulations — still needs to be approved by the MLB Players’ Association.

Until then, groundscrew workers are busy keeping the field in pristine shape, meticulously raking infield dirt and watering the outfield grass as they await the first ground balls and cleat marks of the season.

The Seahawks’ VMAC training facility in Renton has been void of players coming and going this spring, and while the NFL is still aiming to return in the fall as scheduled, teams have had to adjust to life without team gatherings. While tackling dummies aren’t feeling the bruising hits from Seahawks’ linebackers and weights remain racked, players are continuing with their offseason program — which began April 20 — virtually via Zoom meetings.

After losing both former MVP Breanna Stewart and future Hall of Famer Sue Bird for the year to injuries last season, the Storm was prepared to make another title run in 2020, until COVID-19 postponed the 2020 WNBA season. Seattle’s season was set to begin on Friday. While there is no proposed return date as of yet, WNBA commissioner Cathy Engelbert has said the league is considering all options. Hoops at the Angel of the Winds Arena — where Seattle plays some of its games while KeyArena is renovated — sit in a corner next to a shot clock collecting dust while isles to the arena are taped off and concession stands are closed down.

The arena is also home to the Everett Silvertips, who were set to begin the first round of the WHL playoffs before games were canceled. The arena is now being used as a pop-up blood drive in conjunction with BloodWorks Northwest.

Unlike many other spring sports, the Sounders launched their season, playing two regular-season matches before sports were shut down, including a home match on March 7. MLS is reportedly weighing options for a return to play in June in Orlando, but Seattle GM Garth Lagerway says nothing is definitive. Players are expected to be allowed to return to individualized, voluntary training at facility Starfire Sports in Tukwila starting next week.

As college students continue with online classes, all athletic events are on pause, including spring sports at the University of Washington. No Windermere Cup for the UW rowing team as they prepared for a title defense, no spring football game for new head coach Jimmy Lake and Co. and no home games for the No. 2 ranked softball team, fresh off a Final Four appearance a season ago. It remains to be seen what the near future will hold for college athletics, but the fields on the shores of Montlake offer a reminder of the emptiness of college without sports.

Empty fields are a common sight at high schools across the country as students have stayed home and spring sports canceled. Don’t miss our senior spotlight features each week on high-school senior athletes who have missed their final season of high-school athletics.