AUBURN — Owners of unlimited hydroplane racing teams have a tendency toward gallows humor when discussing their sport.

Take, for example, this text Darrell Strong received when he and his wife, Vanessa, joined their ranks before the 2021 season.

“Congratulations and my condolences,” it read.

For years, owners have derisively referred to hydroplane ownership as the world’s most expensive hobby. And what kind of person does Strong think would start a hydroplane racing team nearly from scratch?

“Somebody in serious need of psychiatric help,” he joked. 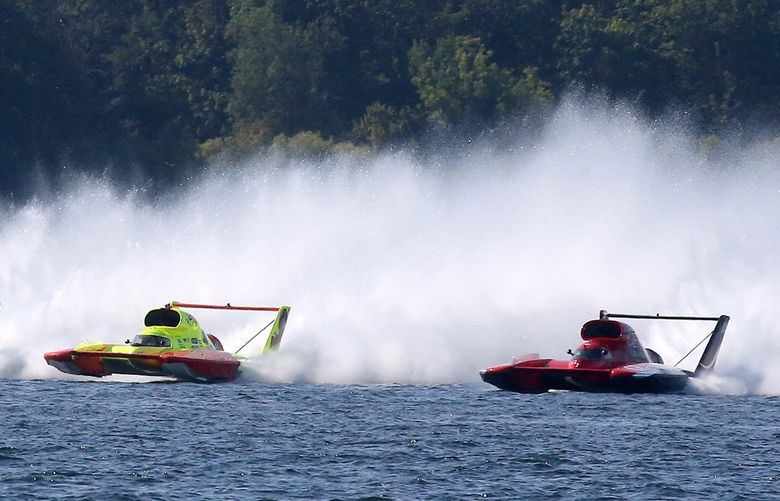 The hydros are back at Seafair, and here’s what you need to know

Self-deprecating jokes aside, the Strong Racing team has enjoyed unprecedented success midway through its second season on the H1 Unlimited Hydroplane Racing circuit. The two-boat team swept the top spots on the podium in its first race. It has won four of its first seven races, and even has a national-championship in its trophy case.

“They’re making all the other teams work hard,” said Scott Raney, owner of the U-11 Unlimited Racing Group. “They’re putting a lot of resources and smart people into their equipment.”

The addition of Strong Racing has made the sport deeper and has kept the sport’s top boat — the Miss HomeStreet — from dominating the field.

“His involvement is certainly appreciated,” said David Williams, executive director of the Hydroplane and Raceboat Museum in Kent and historian of the sport. “Especially in a time the sport needs new blood. Or any blood.”

You see, a rising tide lifts all thunderboats. And that’s exactly what Darrell and Vanessa have in mind.

“We’re in it to win and keep the sport alive,” Vanessa said.

How could a marriage such as Darrell and Vanessa Strong’s union not include unlimited hydroplane ownership, considering their first date was at the Tri-Cities race?

The pair was 15 and with no money. Darrell said that wasn’t a problem since everybody just sneaked in anyway, which they did after church that Sunday in 1975.

This was when the boats were piston-powered and loud. Vanessa said when she heard that first boat come around the corner and thunder down the straightaway, she was hooked.

Darrell remembers first going to the Atomic Cup, now called the Columbia Cup, in 1968, the second edition of the race held on the Columbia River. It became an annual family event for the Strongs, who have two grown daughters who live in Arizona.

In 2013, the Strongs leveled up from fandom.

Darrell read about a race team, Mike Webster’s U-22, that didn’t have a sponsor for the Columbia Cup. Sponsorship is the life blood of the sport, and a team with no sponsor to defray the cost of racing could have to stay in the pits.

Darrell turned to Vanessa and said he was going to drive down to the river and talk to the team about his insurance business, PayneWest Insurance, becoming a sponsor.

Ownership came after the 2019 season when the team he had sponsored for several years, Greg and Brian O’Farrell’s Go Fast Turn Left Racing, approached Darrell about buying the boat. That deal didn’t work out, but the seed was planted.

And then it was planted again a few months later when they bought a second boat. They aren’t the first two-boat team, but …

“We’re doing it differently than everybody else in that we’re doing two No. 1 boats,” Darrell said. “ … We want them to be each other’s best competition.”

Finding the boats may have been the easy part. You need a team to work on them. A shop for the team to work. Trucks to haul the boats to race sites. And then there’s the equipment. So much equipment: engines, gear boxes, propellers, the list is longer than your leg, and none of it comes cheap.

Strong opened with about 18,000 square feet of shop in Auburn. Even though he lives in the Tri-Cities, the bulk of the sport is housed around Puget Sound, so you have to be where the workers are.

And they set out to build a different kind of race team.

Vanessa is determined to be the best team mom possible.

“I do everything behind the scenes,” she said. “ … I take care of the pits. I can’t just sit around. I’m momma and nana.”

They do make sure the little things are taken care of. The shop has apartments in them for anyone who might need them. Team parties, complete with karaoke, are common, especially on Sunday nights after races.

“It’s a team and a family,” Vanessa said.

Before they had even found a boat, they hired Corey Peabody to drive it. Peabody was the sport’s rookie of the year (and also the only full-time rookie) in 2019. He was driving Graham Trucking’s second boat, a former PICO American Dream that had seen its best days decades earlier. It was old. It was heavy. It wasn’t competitive. But Peabody was happy to drive it as it was his first chance at the unlimited ranks.

He has certainly found an upgrade.

Mike and Lori Jones assembled a team that turned the U-9 hull into a championship boat in 2018 when Andrew Tate interrupted Jimmy Shane’s run of national titles. Former Miss Budweiser crew standouts Jeff and Mike Campbell spent five years building the oldest boat (over 30 years old) on the circuit into one of the fastest.

But by the end of 2019 the team was on fumes, and it didn’t defend their title since they skipped the circuit’s Eastern swing. They sold the boat to the Strongs on Jan. 1, 2021.

The Strongs leaned on Peabody, who had won titles and set records in lower classes of boat racing with his own teams, to build the team and tell them what was needed. Peabody devised a plan with friend Brian Hajny, who became the crew chief, on how to build a race team.

Apparently, they knew what they were talking about. In Peabody’s third race, at the Columbia Cup, he got his first win. Drivers can drive for decades and never get a win in a winner-take-all final. Peabody guided the U-9 onto the podium (top-three finish) in every race last season, the only boat to do it.

“He really opened everybody’s eyes that he’s a good driver if you put him in a good boat,” said Darrell, who considers Peabody a principal on the team.

To open this season, Peabody won the Gold Cup in Guntersville, Alabama, the biggest race on the calendar.

But it hasn’t been perfect. The next race, in Madison, Indiana, Peabody hit a spot on the racecourse that forced the boat up so that it caught enough air to blow over. But the boat was fast. It was keeping up with Shane and the Miss HomeStreet. Shane texted Peabody after the race that he was .25 seconds off the lap record.

Peabody and the team could have put the boat together well enough to race it in the Tri-Cities. And there was plenty of reason to do it, as he was second in the National High Points standings.

But the team is done racing for the season, and the Campbells and Peabody plan to build back the U-9 better than before.

“Everything on their wish list is getting done,” Peabody said.

If you can buy one boat capable of winning a championship, why not get two?

Darrell had gotten to know Erick Ellstrom, who had one of the sport’s fastest boats. The boat, which sat in the shop owned by the Joneses, last raced at Seafair in 2017 as the Oh Boy! Oberto.

Ballard-based Ellstrom Racing was one of the sport’s top teams, emerging from the post-Miss Budweiser (after 2004) era with three national titles.

The Ellstroms built this boat from scratch after an earlier version caught fire in Doha, Qatar. But the Ellstrom family started racing more off-road than on the water.

“I just kept looking at it,” Darrell said. “That’s one of the best boats in the sport. And it’s just sitting here not being used.”

It was apparently the last in a championship line. So, who to drive it?

J. Michael Kelly was a veteran driver with 14 wins on the H1 circuit, with his name on the Gold Cup and a winner of 13 national titles in various classes. He was also a childhood friend of Peabody when they were growing up in Kent. Kelly got Peabody into the sport when they were young.

Out of near tragedy came an opportunity. Kelly’s wife, Angela, suffered a brain aneurysm while in Arizona in November 2020. Kelly, who lives in Bonney Lake, spent considerable time in Arizona while his wife recovered (which she did fully).

The Strongs have a house in Arizona, and Kelly was a frequent guest. He was between contracts with Graham Trucking and unsure about his future with the team. And the Strongs offered him one of the best boats in the sport.

“I’ve raced against it, and it was really fast,” Kelly said.

Turns out, it still is.

Kelly won the National High Points Drivers title in the boat last year, winning the first race of the season and the finale in San Diego despite driving with a fractured collarbone he broke while riding bikes with his kids.

It was Kelly’s first national title in the unlimited ranks, and he’s hoping he has the boat to win the team title, too (hydroplane racing separates its national titles into driver and boat/team titles as drivers sometimes switch seats; last year Shane shared time in the Miss HomeStreet with Jeff Bernard; the boat won the team title).

Kelly hasn’t had the best luck this season, as he did not finish in the final in Guntersville and a fourth in Madison. He was second last week in the Tri-Cities.

He’ll be the only driver for the team for the final two races, as his U-8 Miss Tri-Cities will race as the U-9 Boitano Homes at Seafair. The U-8 will stay the U-9 for the rest of the season, and the points Peabody put up will transfer, putting the boat behind Shane in the seasonlong race.

At the top is where they expect to be now and in the future.

“We want to run these two boats for a long time,” Darrell said. “We want two boats that always figured to be the favorites to win.”