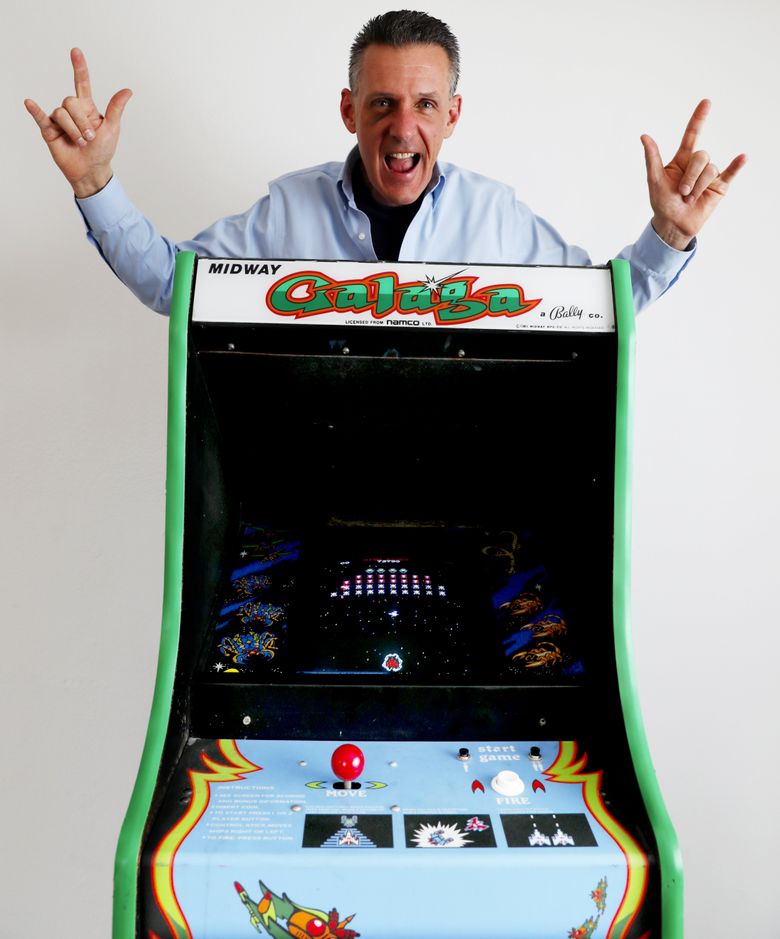 It takes hours to top 4,000,000 points in the classic video game Galaga, but Andrew Laidlaw has routinely sits on a bar stool and tops the mark. He’s the current world-record holder in the game. (Ken Lambert/The Seattle Times)

Andrew Laidlaw holds the world record at the 1980s video game, but he’ll have to hold off a stacked field Sunday at Score Wars if he wants to prove he’s truly the best.

Update, Monday, April 2: Andrew Laidlaw made it to the semifinals of the Score Wars Pro Galaga Tournament on Sunday, April 1. He lost in the semis to eventual champion Andrew Barrow, and finished fourth overall after losing the bronze match to Jon Klinkel.

In order for the record to be official, the entire game has to be filmed. So this means all of Andrew Laidlaw’s failed attempts were caught on tape, too.

For six months, the Kirkland resident stayed cooped up in his one-bedroom condo in hopes of scoring the most points in the history of Galaga — a 1980s shoot-’em-up arcade game where the player fends off insectlike enemies from a spaceship.

Trying to surpass 1.5 million points, Laidlaw would play three-hour games only to fall 100 points shy. Like a bowler rolling a 294, anxiety would cripple him once the finish line was in sight.

One night, several months into his endeavor, the frustration overwhelmed him. On the video, you can hear Laidlaw pounding on the machine in angst when all of a sudden — THUMP!

He passed out and hit the ground. Laidlaw isn’t proud of this, but hey — that’s the life of a champion.

The 52-year-old Laidlaw eventually broke the record in 2008. He would annihilate it two years later after it was temporarily snatched away.

At that point, he figured he’d played his last game and eventually sold his machine. Then, about six months ago, he got a call.

“I honestly thought it was a joke,” Laidlaw said.

Nope. On the other line was a man named Adam Kidd, who was organizing the inaugural Score Wars. The event, held at Meow Wolf in Santa Fe, N.M., has hosted various video-game competitions over the years, but the inaugural championship — which takes place Sunday — is a $10,000 World Galaga Tournament.

Kidd said that none of the gamers he contacted believed him at first. The phrase “out of the blue” doesn’t do this justice. An all-expenses-paid tourney involving 10 players from around the world? Unreal.

Laidlaw’s initial reaction was excitement. That quickly morphed into panic. He hadn’t played Galaga in years and didn’t even know where he could practice.

What would it say about the world-record holder if he got bumped in the first round of this single-elimination event?

“I just keep thinking I’m going to be like Peyton Manning playing against the Seahawks,” Laidlaw said. “You have this record-breaking season, but once you get to the Super Bowl you choke.”

Fortunately for Laidlaw, the owner of Another Castle arcade in Edmonds lent him a machine. Nearby Sluggers Bar and Grill even gave him a bar stool. Laidlaw is hellbent on bringing a world title to the Northwest and recently posted more than 2 million points before losing any of his five ships.

I’m intrigued as he tells me this from his living room, but I’m having a hard time looking away from the shiner under his right eye.

“What happened there?” I ask.

“A stack of chairs fell on me,” he said. “But I’m gonna say it was from my nemesis from Australia.”

The objective of Galaga is to rack up points by killing enemies without letting them destroy your ship. And this was Laidlaw’s favorite game while growing up in the Denver area, where he lived until his parents moved to Kirkland before his senior year of high school.

Like those kids from Stranger Things, he and his buddies would ride their bikes to the arcade every day after school and play until the sun set.

Laidlaw knew he was good, but in the pre-internet days there was no way he could have known he was that good. So as he ventured out into adulthood, he moved on from his gaming days and began working as a graphic artist.

Then one day in 2007, Laidlaw caught a screening of “The King of Kong,” a documentary showcasing Redmond resident Steve Wiebe’s attempt to break Billy Mitchell’s longtime Donkey Kong record. But what really caught Laidlaw’s attention was when Mitchell’s friend Steve Sanders said that if you want to be known as a world-class player, you have to master one of five games: Donkey Kong, Pac-Man, Ms. Pac-Man, Defender or Galaga.

After watching the film, Laidlaw looked up the record for Galaga (tournament settings) on twingalaxies.com and decided it was breakable. And since he had coincidentally bought a Galaga machine two years earlier, he began the pursuit almost instantly.

What ensued was an all-consuming quest that included 15-hour sessions, hundreds of close misses and the occasional blackout. But one day, in a Wilt Chamberlain-like performance, Laidlaw got the record with 2.7 million points. There were times he thought he never would, but he got it.

Then he lost it.

Eight thousand miles away, a man named Phil Day took note of Andrew’s record and began a chase of his own. Teaching in a small town in New South Wales, Australia, Day would play at a nearby arcade called Arnot’s and gradually watch his score increase.

“I wanted to hurt him,” said Laidlaw with a laugh. “Obviously, I didn’t want to actually hurt him, but I wanted to pound his record into submission.”

Let’s clear something up in case you’re unsure: Laidlaw is an incredibly nice guy. But he’s also incredibly determined when he puts his mind to something.

After watching “The King of Kong,” he told himself that he was going to become best friends with Wiebe, and he did.

And when he said he was going to pound Day’s record into submission, well, you knew that record was going to eventually yell uncle.

More dedicated than ever, Laidlaw would break Day’s mark repeatedly but refuse to send in the tapes for verification. He didn’t think scores were high enough to fend off posterity, and he didn’t want to have a back-and-forth with Day.

“He told me that he retired,” Laidlaw said.

This, of course, was said after Day called Laidlaw to congratulate him. To this day, the two chat on the phone regularly.

Sometimes it’s to talk life and share stories — but lately, it’s been to exchange Galaga strategies. Because against this field in Santa Fe, they’re going to need all the help they can get.

Andrew Barrow is a New Zealander who scored 3,514,030 points last year — the second-highest mark ever. Unlike Laidlaw and Day, he never really stopped playing and has supposedly looked sensational in practice runs this week.

Armando Gonzalez is from Los Angeles and said he has surpassed Laidlaw’s mark at Button Mash at Echo Park, but because he didn’t record it, it’s not official. His only hangup might be the carpal tunnel syndrome he’s developed from all the joystick wielding. After practicing Friday, he wrapped his hand in ice just to keep the swelling down.

John Klinkel, meanwhile, is from Michigan and was the man Day thought would break his record before Laidlaw did. And then there’s Seattle’s John McAllister, who, as Laidlaw affectionately put it, “is kind of a freak.”

Who knew that the Puget Sound area was such a breeding ground for ’80s arcade-game wizardry? You have Wiebe, who famously set the Donkey Kong record. You have Laidlaw, who currently holds the Galaga record. And then there’s McAllister, who holds pretty much all the others.

In 1982, a man named Scott Safran set a record in Asteroids that lasted for 36 years. Last February, McAllister broke it after playing for more than 36 hours straight. According to Twin Galaxies, he holds world records for 18 other games, including Robotron, Joust, Asteroids Deluxe and Assault.

He is basically the video-game world’s Michael Phelps, blowing away the field in any event he chooses to master. And he’s eyeing Galaga as his next conquest.

To qualify for Sunday’s tournament, McAllister submitted a score of about 880,000. That’s fairly pedestrian as far as world-class standards go, but Day and Laidlaw were wondering how much the prodigy has improved since.

Turns out quite a bit. During a practice run Thursday, he scored 3.1 million points.

“I discovered a new technique,” McAllister said, which is basically like a Jedi discovering a new power.

And what’s that? I asked.

“It’s a secret technique,” he said. “It won’t be revealed until Sunday.”

Don’t think this is just about practice. There is something genetic going on here, too. Pattern recognition, high processing skills, supersonic hands — like gifted athletes, these gamers simply have something the rest of us don’t.

While I don’t know about you, I’m fascinated as to how this is going to turn out. It’s a match-play type bracket, and like the NCAA tournament, you’re bounced if you have one bad game.

What are you going to do with the money if you win?I asked Laidlaw.

“I’ll gladly put that into savings,” he said.

Probably better than turning it into 40,000 quarters.