As pandemic projects go, this one was quite successful.

It brought a boat that was bound to just be sitting in a shop back to the course. It turned that boat from an also-ran into one of the fastest in the sport. And it brought the sport’s winningest driver out of retirement. And it gave one of the longtime boat sponsors at Seafair a place to put its name.

It’s the U-40 Miss Beacon Plumbing and it was the second fastest qualifier during a breezy Friday at the HomeStreet Bank Cup at Seafair. Dave Villwock drove the boat on Lake Washington to a 151.076 mph mark, second only to the U-1 Miss HomeStreet (153.539).

Kelly Stocklin, who owns Snohomish-based Bucket List Racing with wife Sharon, is a longtime collaborator with Villwock as the two raced flat-bottom boats together 30 years ago. They long had an understanding they would work together if Stocklin ended up with a new boat. 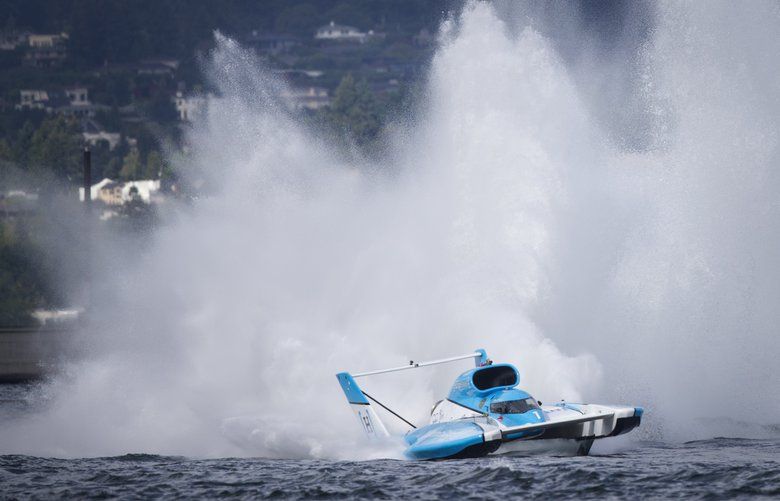 The hydros are back at Seafair, and here’s what you need to know

The opportunity came about when they bought the boat from Greg and Brian O’Farrell of Go Fast Turn Left Racing, which had a new boat that debuted in 2019. The old boat, which often ran as the U-21 Lakeridge Paving, was available.

“It really never was let’s get the band back together,” Stocklin said. “The band kinda got back together by itself.”

The boat was bought before the COVID-19 pandemic hit, which gave the crew plenty of time to work on it. And the crew was a veteran bunch, many of whom had worked with Villwock for decades. Dan Walters worked with Villwock when he drove the Circus Circus at the beginning of his career in the 1980s. Bob Burks was him with the Ellstrom Racing team, his first stop after the Miss Budweiser days (after 2004).

They clearly picked up some knowledge during their time in the sport. The boat was never one of the contenders before last season. Now it’s one of the fastest in the pits.

Here’s how the boats qualified Friday on Lake Washington

“It’s just a lot of little details,” Villwock said. “… You just inch away at things.”

Not that it was a storybook start. When the four-race 2021 season opened, the Miss Beacon got a DNS (did not start) in Heat 1B. By the time the season was over in San Diego, a penalty was all it kept from keeping the boat from winning the Final. It was fifth in the High Points National Standings.

“We went from not being able to answer the bell in Guntersville to second fastest,” Stocklin said.

And they even pulled off a busy week as Villwock and the U-40 flipped last weekend at the Columbia Cup in Tri-Cities. The boat was ready when it pulled into the pits Thursday.

In Villwock’s long career, he’s set records for most race wins (67), national titles (10) and he holds the most victories at Seafair (10). The only record he doesn’t own is most Gold Cup wins, which Chip Hanauer still holds (11 to 10).

If he finishes the season and races in San Diego, he’ll also break the record for oldest driver of an unlimited hydroplane. According to the numbers crunched by H1 Unlimited, Walt Kade was 68 years and 212 days when he raced the Sweet Thing in Detroit in 1972. Villwock, who lives in Monroe, will pass that by the time San Diego Bayfair rolls around next month.

Dave found those stats amusing, but he said it’s not something that means too much to him. And he doesn’t have any plans for how long he’ll be doing it.

Last season, Bucket List was a two-boat team with the 440 driven by Dustin Echols. The team announced before the season that they’d concentrate on the U-40 and that Echols was still part of the team.

The U-440 was never intended to be a contender. It’s a converted G-class hydroplane that was the smallest in the pits. It also didn’t have an engine that would keep up with the rest of the field.

Stocklin is still thinking about what he’ll do with the boat. He might still race it, but he wants a better ride for Echols. He could use the boat as a method to train new drivers, something the sport needs.

“That boat is not prepared to race with these boats,” Stocklin said. “And [Echols] knew and so do I.”

As fast as they’ve gotten the boat, Villwock and Bucket List are still looking for their first win together. And Bucket List’s first unlimited win as a team.