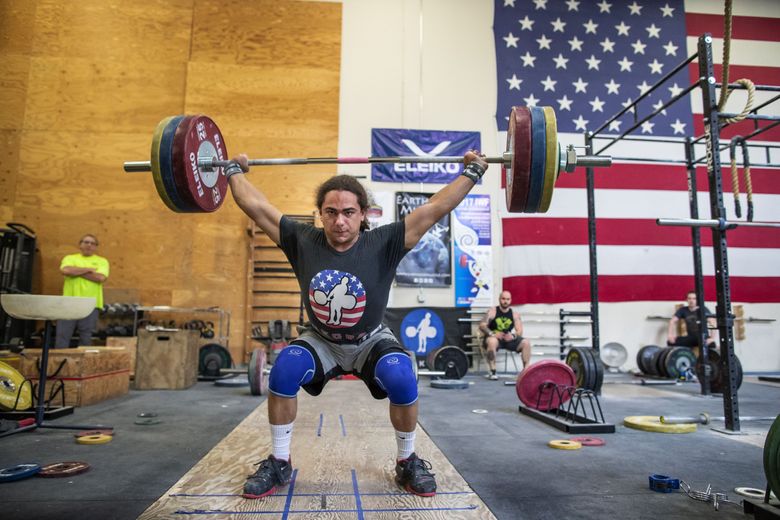 Harrison Maurus of Auburn has made a meteoric rise in weightlifting. (Dean Rutz/The Seattle Times)

Last December, 18-year-old Harrison Maurus of Auburn became the first American man in 20 years to medal at the International Weightlifting Federation World Championships. His meteoric rise could end in gold.

The last thing Harrison Maurus does before stepping up to a weightlifting platform is shed his rectangular, metal-framed glasses.

When the glasses come off, “It’s go time,” says Maurus, an 18-year-old Auburn native who, this past December became the first American man in 20 years to medal at the International Weightlifting Federation World Championships.

Not unlike the moment Clark Kent rips off his dress shirt to expose the blue and red Superman suit underneath, the shedding of Maurus’ glasses sparks his transformation from an intellectual, reflective, soft-spoken high school senior into world record-setting weightlifter.

Weightlifting, he explains, takes such tremendous concentration and effort channeled into one intensive burst that weightlifters get agitated by even small distractions – such as when people walk by their platform as they’re about to attempt a heavy lift.

“But,” he grins, “When I can’t see them, it doesn’t bug me. So, like they’re essentially not there.”

Glasses off and psyche tuned to his own private weightlifting channel on this unseasonably warm spring day, Maurus steps up to the platform at Alpha Strength and Conditioning in Auburn, and stares down a bar loaded with an assortment of colorful weight plates.

He checks both sides to ensure the bar is correctly loaded and clicks his heels to push his feet as far back as they will go within the confines of his sturdy weightlifting shoes.

Then, he cinches his weight belt tight around his trim waist and makes his final approach.

Squatting over the barbell, Maurus clasps his palms around the stainless steel bar. For a few seconds, he obsessively wraps and re-wraps his fingers around the cool metal until he finds the perfect solid grip.

There’s an almost meditative moment of complete stillness as Maurus holds himself motionless while bent over the bar.

Then, the kid billed as the U.S. men’s next great Olympic medal hopeful in weightlifting explodes into motion, pulling on the bar. His head and chest come up, and he dives underneath, catching the bar on his shoulders and standing up.

Maurus inhales sharply and heaves upward in a movement that appears simultaneously superhuman and effortless. His thick, powerful legs split into a sturdy lunge as his arms triumphantly lock out, and his entire body works in concert to support the weight of the 201 kilograms held steady over his head.

That converts to about 442 pounds, roughly the weight of a motorcycle, and it’s a personal record for Maurus, who’s peaking at the end of a training cycle before he competes in the Senior Pan American Games in the Dominican Republic from May 12-15.

This competition will be Maurus’ first chance to truly test himself in his new weight class: 85kg, or 187 pounds.

It will be a good barometer by which to gauge the progress he’s made since last December, when, competing in the 77kg weight class at IWF World Championships in Anaheim, Calif., Maurus announced his arrival on the international weightlifting stage by clean-and-jerking 193 kilograms to win the bronze medal that ended the U.S. men’s medal drought, and reset his own youth world record.

That Maurus managed that winning lift on a left quadricep that cramped up during the “clean” portion of his lift says volumes about the 18-year-old’s potential in the sport.

“Honestly, I think he would have been good for a 200-kilogram clean and jerk if his quad hadn’t seized up,” says Kevin Simons, the only weightlifting coach Maurus has had. “He was looking strong. He was looking ready for it.”

In weightlifting, each athlete gets three attempts at two different lifts. The snatch involves pulling the bar directly overhead in one smooth movement. The clean-and-jerk begins with the lifter “cleaning” – pulling the bar up and diving under to catch it on the shoulders and standing up – then, “jerking” – driving the bar up from the shoulders to a locked out position overhead, with the arms fully extended.

Medals are granted for the heaviest lift in each weight class, and also for the highest total – the combination of the heaviest snatch and clean-and-jerk.

Despite his cramped quadricep, Maurus, then 17, also picked up a second bronze at Worlds when his 193-kilogram clean-and-jerk combined with his 155-kilogram snatch for a 348-kilogram total.

The two bronze medals were a seminal feat in the trajectory of Maurus’ relatively young career.

“The goal a couple of years ago was to make it to the Olympics,” Simons says. “And then, coming out of this last World Championships, it went from being, ‘Maybe he can get a medal in 2020 (at the Tokyo Olympics)’ to ‘We want a gold medal in 2020. It’s a paradigm shift.”

Added Maurus, “It shows Kevin and I that we’re doing the right things, going in the right direction and progressing forward. … It really re-affirmed that the Olympics is the goal now. That’s 100 percent where I want to be.”

It’s laughable to think about it now, but the kid had to be talked into trying weightlifting, Simons says.

Maurus’ first serious sport was gymnastics, which he did until age 11, when he realized that the sport didn’t really play to his physiological strengths.

“I was a good gymnast, but I wasn’t a great gymnast and I was never going to be a great gymnast,” Maurus says, his glasses now back on his face, completing his transformation from ferocious weightlifting champion to average unassuming teenager. “I was never very flexible. My strength-to-body-weight ratio was always pretty good, but I couldn’t point my toes.”

Simons, a former level 10 gymnast, was originally Maurus’ gymnastics coach. Like Maurus, he also recognized his pupil’s limitations in gymnastics, so when Maurus decided to quit the sport, Simons suggested a basic strength and conditioning program to keep Maurus in shape until he decided what to pursue next.

Maurus started squatting, deadlifting and bench pressing to build a strength base, and soon began competing in powerlifting competitions (deadlift, squat and bench press). In his first year in the sport, at age 12, Maurus qualified for U.S. Powerlifting nationals.

“It was me and one other kid my age at powerlifting nationals, and I blew him out of the water,” Maurus says. “I opened at his last lift, and it wasn’t even close. So then it was like, ‘OK, now what?’ I’m a competitive person and I like to push myself against myself and others. And that really wasn’t available in powerlifting.”

But, “I was a bit hesitant at first to start transitioning into weightlifting,” Maurus says. “I was never a very aggressive gymnast and I didn’t like to put myself in (awkward) positions.

“In weightlifting, you have to hit some funky positions and you’ve got to throw a couple hundred pounds over your head and just trust that you’re going to catch it and not absolutely pancake yourself,” Maurus says. “That took a little bit of time, and some trial and error.

“I’ve pancaked myself a couple times, but I learned from it, and it was all good.”

Maurus grins affably as he says this, his thick, curly mane of a ponytail bobbing merrily behind him.

His hair extends beyond his shoulders, and its length is testament to how good Maurus has gotten at weightlifting: He admits to being “a little superstitious” and says he hasn’t cut his hair since he last bombed out of a competition, and doesn’t plan to cut it unless he bombs out again.

“Bomb out” in weightlifter-speak is going 0 for 3 in one of the two lifts, and that’s only happened to Maurus once, at his first national competition – the 2013 American Open in Dallas.

Maurus went 0 for 3 in the clean and jerk and clocked himself in the back of the head with the bar on his 116-kilogram jerk attempt.

It was a comical start to what’s turned out to be a promising tandem of Simons and Maurus, who have grown up together both in and outside of the weightlifting.

“With Harrison, it’s somewhere between a younger brother and a son,” says Simons, 30. “He’s definitely family. He was one of my groomsmen at my wedding, and I feel very protective over him.”

“We couldn’t have asked for a better peer, mentor and coach than Kevin out there. They’re like two peas in a pod,” says Tracey Maurus, Harrison’s mother. “We laugh all the time because their sense of humor is so similar, and even the way they walk looks the same.”

When he first started working with Maurus, Simons was a self-taught weightlifter who’d honed his skills in the Olympic lifts by watching instructional YouTube videos and painstakingly reviewing video he’d shot of himself.

But he quickly realized that having to teach the lifts to someone else was a different sort of challenge.

“I was a pretty good lifter, but I’d never coached anybody,” Simons says. “Harrison was the first person I ever taught a snatch or clean-and-jerk to.”

The pair muddled through the process, making mistakes and learning from them. The 2013 American Open ended poorly for Maurus, but it wasn’t entirely unsuccessful. Prior to his mishap in the clean-and-jerk in Dallas, Maurus set a national record for his age and weight class with an 88-kg snatch.

That feat attracted the attention of then-U.S. national team weightlifting coach Zygmunt Smalcerz, who invited Maurus and Simons to attend a camp at the Olympic Training Center in Colorado Springs.

“So they flew Kevin and I out, and that’s really what kicked off our training to start with,” Maurus says.

Six months later, Maurus qualified for and competed in the 2014 Pan-American Youth Championships, where he finished eighth.

With a strict training regimen under Simons’ now-seasoned eye, Maurus’ numbers have increased steadily over the past six years.

He wouldn’t trade his current life for anything, but becoming a world-class weightlifter before his 18th birthday has come with sacrifices, Maurus says.

For one, he hasn’t gotten to appreciate the full extent of the traditional high school experience. Maurus missed about a month of school at Auburn Riverside High last year because he was traveling for weightlifting meets.

His grueling training and travel schedule has also forced him to miss some of the big milestone high school events.

This coming weekend, for instance, while Maurus is competing at the Senior Pan-American Games in the Dominican Republic, his classmates will be at their senior prom.

“He was excited about going to senior prom this year,” Tracey Maurus says. “I think he feels like, occasionally, he missed out on some of the typical teenage stuff. Kids go out on the weekend, whereas he’s getting ready to train on Saturday morning.”

Weightlifting also factored heavily into Maurus’ college decision. He has a 3.9 grade-point average and his first choice was Hawaii Pacific University because he wants to become an osteopathic doctor, and that school offers an accelerated doctor of osteopathic medicine program.

Maurus applied and was admitted, but has since decided to stay home and attend UW this fall so he can continue training at Alpha Strength under Simons’ direction.

“If I really want to push to the Olympics, I have to stay local,” Maurus says. “That’s probably the only reason I stayed around here.”

Above all, Maurus wants to maintain his partnership with Simons, who, he thoroughly believes, is completely invested in his success.

“I’ve really grown with Kevin,” Maurus says. “Everything I’ve done is because of Kevin. I’ve gotten to know him so well.”

After all, Simons has, in painstaking detail, programmed, charted, recorded and reviewed every single lift Maurus has ever taken.

Simons knows, better than anyone, exactly what Harrison Maurus is capable of, and he believes this journey they started together will one day take Maurus to the top of an Olympic podium.