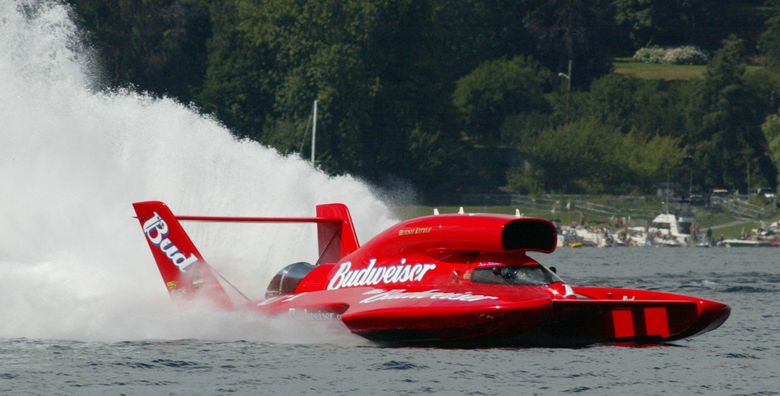 The Miss Budweiser won its final race at Seafair in 2004. (Greg Gilbert / The Seattle Times)

By
Nathan Joyce
The Seattle Times

TUKWILA ­— When Jimmy Shane was a teenager, a trip to a nondescript building in the Seattle suburbs helped set the course for his future.

Shane, who will drive the U-6 Miss HomeStreet at Seafair this weekend, was there — at the building known throughout unlimited hydroplane racing as the “Bud Shop” — because his mom, Robin, won an inboard hydroplane championship. His family, which is from the Baltimore area, was invited to a boat-racing convention.

The trip to the Bud Shop included a guided tour from Dave Villwock, the sport’s winningest driver, and a photo in front of the Miss Budweiser.

“I told myself in my head that I’m going to drive that boat one day,” said Shane, who lives in Maple Valley these days.

Not only did he drive it, he won a national championship in that boat in 2013 when it was the Graham Trucking.

Shane no longer drives that boat, but he’s at the shop, now called the HomeStreet Racing Shop, often, since his team, the Miss Madison racing team, took over the lease and bought the contents of the building two years ago.

Fifteen years after disbanding, the Miss Budweiser team is still keeping the sport afloat. From hulls to engines to equipment manufactured at the Bud Shop, remnants of the famous team can still be found scattered about the sport.

“It’s amazing how long that stuff has lasted,” said Villwock, who ran into one of his old engines last summer helping the U-1918 Oberto at Seafair.

The Miss Budweiser team ran the shop from the mid-1980s until it disbanded after the 2004 season. The shop was a port for hydroplane teams over the following decade and a half, to make repairs and get boats ready to surpass 200 mph on Lake Washington.

When the Miss Madison team turned the key for the first time, waiting for the team that has won eight national championships since 2008 were the precious parts to make the next hull that could lead to even more titles.

“The jigsaw puzzle was all laying there,” said Charlie Grooms, chairman of the Miss Madison team.

The puzzle was finally completed last season as the boat debuted at the Columbia Cup at Tri-Cities. It would have won last year at Seafair had it not been for a penalty in the final. With the season more than half over, the Miss Madison sponsored by HomeStreet has a commanding lead in the national high points standings.

And built in the same molds and the same building that built so many Miss Budweiser boats that dominated the sport for so long. It’s a fact not lost on the Madison team.

As Shane said that last month, two other boats were using the space to get ready for racing. The Miss HomeStreet’s former hull was being turned into the U-1918 Oberto Super Salami.

And another former Miss Budweiser hull, which ran last in 2012 as the Miss Degree Men, was also on a trailer with its hood up and was getting ready to return to racing.

It’s been a familiar scene over the past 15 years as former Miss Budweiser crew chief Mark Smith ran the shop. Teams needing to use the space for repairs or needing a part would make arrangements with Smith.

“It was boat-repair central, if you will,” said Grooms, who intends to continue the arrangement for the good of the sport.

Domination on the water

That Miss Budweiser equipment has been vital to the sport over the past 15 years could be ironic for those who were around the sport in the team’s final years.

In terms of dominance, the Miss Budweiser is often called the New York Yankees of boat racing. And that might be understating it.

The team’s funding, coming from Anheuser-Busch’s sponsorship and managed by the sport’s biggest figure, Bernie Little, dwarfed the funding throughout the rest of the circuit.

“You can’t beat somebody who has a bigger gun and more bullets,” said David D. Williams, who is the executive director of the Hydroplane and Raceboat Museum in Kent.

Little started the Miss Budweiser team in the 1960s and built it into the sport’s preeminent team. By the 1990s, the team had become so dominant it took most of the suspense out of the races. The sport even came up with a few rules designed to reel the Bud back toward the pack.

It succeeded in infuriating the team but not in keeping it from winning.

Williams points out that the domination wasn’t intentional. It wasn’t corruption. The team used its many resources well and hoarded the best talent. Little was also known for sharing information and for loaning competing teams parts to get them through a weekend.

But you can’t ignore the numbers: From 1991 to 2004, the Miss Budweiser won all but one national title. That was in 1996 when the PICO American Dream, driven by Villwock, took the title. The next year Villwock was driving the Miss Bud.

“The mistake everybody makes is thinking the success is in the equipment,” Villwock said. “To a certain degree that’s true, but it’s the people running it and what they do with it.”

Little died before the 2003 season, and Anheuser-Busch announced the next year that 2004 would be its last as a sponsor, leaving a vacuum in the sport.

“We as a sport became dependent on Anheuser-Busch money,” Williams said. “ … That led to some unfortunate prejudices against the Miss Budweiser.”

This Bud’s for you

To most fans, the spread of Budweiser equipment goes unnoticed. It’s tough to tell where a turbine engine came from or a gear box or a propeller.

The Miss Budweiser team built six turbine hulls. Two are owned by Bernie’s son, Joe Little, who ran the team the final two years, and are in Florida. The six hulls were given a T designation and a number. For example, T-1 (which is short for turbine one) and T-2 are the boats owned by Little family.

Several of the boats have done well over the past decade.

The T-5 and T-6 — the last two boats to run as the Miss Budweiser — went on to win another national championship, each with a different sponsor. The T-6 was the boat Shane drove to a title.

Ted Porter bought the T-5 and T-6 hulls for the 2006 season. They ran for years with the Formulaboats.com as sponsor.

Two years ago, Porter left hydroplane racing, and Rob Graham, who owns Seattle-based Graham Trucking, bought the T-6, making the move from sponsor to driver. Veteran driver J. Michael Kelly drove the boat to a win at the Columbia Cup in the Tri-Cities last weekend.

The boat has undergone numerous modifications over the years.

“They were things they (the Miss Bud team) probably would have done as well as time went by,” Graham said.

In 2017 Porter sold the T-5, which won the national title in 2006 as the Miss Formulaboats.com II, to Dave Bartush of Detroit, who races the boat as the U-7 Spirit of Detroit. Bert Henderson drove the boat to a runner-up finish at the Gold Cup in Madison, Ind., last month.

Bartush picked up a second former Miss Bud hull this spring, buying the T-3, one of the winningest hulls in unlimited hydroplane racing history, winning 43 races, five Gold Cups and six national titles, from Joe Little. Bartush said he plans to race it next season and will be taking it back to Detroit to get it ready.

The T-4 still exists, but it doesn’t see the water these days. Scott Raney, who runs the U-11 Unlimited Racing Group, has the T-4 as the team’s backup boat.

The T-4 was a rare flop for the Miss Budweiser team, which built the boat with an experimental multi-wing design. It never won a race as the Miss Bud, and the team quickly gave up on it.

“It became the world’s most expensive display hull,” Raney said.

Bill Wurster bought it in 2002 and made several modifications to turn it into a standard racing boat. The boat’s racing days seemed to be over after a crash in Detroit in 2010. But Raney needed a boat after his was damaged in Doha, Qatar, in 2013 and they put the T-4 back together and raced it as the U-11 Peters & May.

“You can go to any of the top teams, and they all have a Budweiser engine or two or three,” Raney said.

And that equipment still carries plenty of cachet.

“It’s very recognizable when … all of a sudden you see coming out of the back of their hauler a red and chrome engine, and you’re like, ‘that’s cool. That’s one of the old Bud motors.’ ” Shane said. “As a driver, when you see that, you know they’re putting really good equipment into their boat.”