The thrill of the greatest basketball player of his generation walking onto the court was overshadowed by him and a herd of other stars abruptly walking off it.

Playing in the Emerald City for the first time since 2007, LeBron James wowed the Seattle Pacific University crowd for a quarter and a half in the CrawsOver — a summer Pro-Am League run by 206 basketball legend Jamal Crawford. But on a Saturday that included a maddening entrance “line,” a pulled fire alarm, a warning to the crowd from a police officer and a scolding from Crawford himself — the game was called off with 5:47 left in the second quarter because of a dangerously slippery floor stemming from the humidity.

Fans weren’t happy. At least not most of them.

Seattle residents DeMarcus Cousins (no relation to the NBA player) and Matthew Miller actually weren’t too miffed. They were just pleased players such as James, Celtics All-Star Jayson Tatum, Nuggets standout Aaron Gordon, Huskies great Isaiah Thomas and the NBA’s most recent No. 1 overall pick Paolo Banchero showed up for the event. 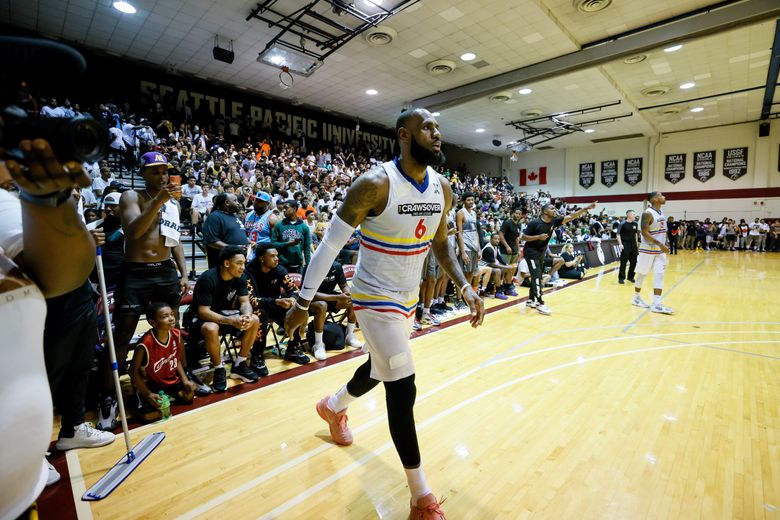 “Overall, it was a good experience, even if it was just two quarters,” said Cousins, before praising the event’s host for recruiting the talent. “Shoutout to Jamal Crawford — he’s a legend!”

Saturday was supposed to be Crawford’s finest hour as overseer of the CrawsOver, which has lured in players such as Kobe Bryant, Kevin Durant and Kyrie Irving throughout the years. The league — which never charges admission — has been a summer sports staple at Seattle Pacific for years.

When the big names come out — as Banchero and last draft’s No. 2 pick Chet Holmgren did last month — lines form around Royal Brougham Pavilion long before the doors open. But LeBron is different. Much different. And it didn’t look as if event organizers were prepared.

Unique Cherry, who runs a basketball league in Tacoma, said that he was 198th in line at 3 a.m., while camping out Saturday morning. By 8 a.m., he said he was 400th in line. Folks would cut or join their friends and push the early birds to the back — but that was nothing compared to the scene a few hours later.

When I showed up, there was no line. There was just a mob. No structure of any sort. Seattle resident Abdi Abdi said he began waiting at 5 a.m. and didn’t get in until five minutes before LeBron’s game was scheduled to begin, adding that many of the early comers were drowned out by folks who arrived just before the gates were supposed to open at noon and never got in.

Part of the reason many adult fans were denied entry was because Crawford put an emphasis on kids getting in so they could see their heroes. But that didn’t stop an array of basketball die-hards from being understandably upset.

“It’s a very bad stain on Seattle’s basketball community,” Abdi said. “It was an [expletive] show.”

It’s easy to blame event organizers for not seeing this coming, and that’s likely what many will do. The thing is, the CrawsOver has always been an informal event where fans just kind of show up and enjoy hoops. Hasn’t stopped them from coming before.

Besides, it seemed as if James just decided he was going to play in it a couple of days before flying out to Seattle — leaving little time for mass preparations.

But the lines — outside and at the concession stands — were frustrating. And when a fan pulled a fire alarm, it almost ended the event.

At one point, Crawford got on the mic and told the thousands in the stands to show more class in welcoming the likes of James and others to their city. A police officer later got on the mic to tell the fans — many of whom were overcrowding the baseline and other parts of the court — that one more mishap would end the event.

The game carried on — with Tatum knocking down five threes and LeBron throwing down a monster jam along with other highlights.

Unfortunately, it just got way too humid in Royal Brougham, causing way too much moisture on the court and leading to Crawford calling off the game for the players’ safety. Part of the reason for the excessive heat? Security couldn’t open the front doors to let air in from outside due to fear of fans barging in.

Afterward, former Sonics coach Lenny Wilkens walked outside and addressed the sadness of the situation.

“I was disappointed for Jamal, he really goes through a lot to put this on,” he said. “Not a happy ending, but at least [the fans] did get to see a little bit.”

True. But far too little.

CrawsOver security guard Dedriq Trinide was obviously dismayed by the events of the day. He said he is a huge James fan, but fears Saturday might end up deterring him and other stars from coming out to Seattle in the future.

Funny, the aforementioned Cousins said that seeing LeBron play in Seattle was “a once in a lifetime opportunity.”

After all that transpired, that’s probably true.