Before he played under him as a forward with the Sonics, and before he forged a lifetime friendship with the legend, Spencer Haywood remembers meeting Bill Russell after the Celtics played against the Pistons in Detroit.

Russell was basketball’s greatest player at the time, and Haywood’s high school coach, Will Robinson, wanted him to watch the man who, more than anybody in the sport’s history, could dictate the outcome of a game with his defense and rebounding alone.

Haywood was impressed by Russell’s prowess on the court, but what stood out to him more than anything was his style and flair off it: His resplendent clothing, his debonair top hat, and, of course — his goatee.

“I couldn’t wait to grow me one of those,” Haywood said Sunday. “That’s the first thing I did on my way to the Olympics. And I was blocking every shot that came in, saying to myself, “I am Bill Russell!” 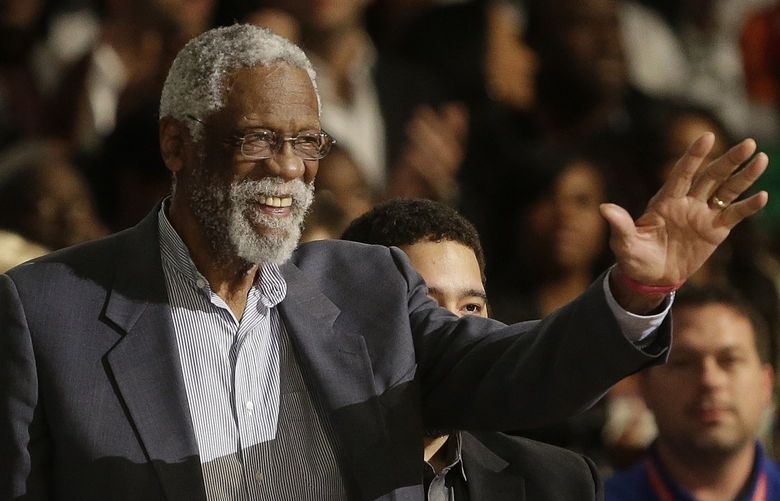 Russell died Sunday morning at the age of 88 due to undisclosed causes, leaving an unfillable void in the basketball universe. The longtime Mercer Island resident won a record 11 NBA championships with the Celtics over a 13-year period — two of them as a player coach — before serving stints as the coach of the Sonics and Kings.

Often hailed as the greatest winner in team sports history, the center’s résumé includes two NCAA championships with the University of San Francisco and an Olympic gold medal in 1956. He was also prominent in a number of civil rights causes, prompting a lot more people than Haywood to want to be just like him.

“Bill Russell was my idol. I looked up to him on the court and off,” Magic Johnson tweeted Sunday. “His success on the court was undeniable; he was dominant and great, winning 11 NBA championships. Off the court, Bill Russell paved the way for guys like me.”

Russell was famous for never signing autographs. Instead, he’d offer to have a cup of coffee or conversation with anybody who came up and sought his John Hancock. How could any fan of basketball or life in general turn that opportunity down? It was a chance to gain real-time insight into one of the greatest minds to ever grace the world of sports.

This man dominated his era like no other player despite averaging 15.1 points per game for his career and never logging more than 18.9 for a season. But he pulled down an incredible 22.5 rebounds per game over his career — second only to Wilt Chamberlain — and if they recorded blocked shots when he played, he likely would have been the all-time leader.

Pulitzer Prize-winning sports columnist Jim Murray talked about how, when he worked for Sports Illustrated, he would push to get Russell on the cover of the magazine during his time at USF. His editor asked “Why? I’m looking at the box score and the guy only had six points.” To which Murray replied: “Yeah, but did you notice the other team only had 42?”

Russell’s NBA peers definitely noticed, voting Russell league MVP five times — once more than Chamberlain — despite Wilt having far gaudier offensive stats. Celtics coach and general manager Red Auerbach noticed, too, eventually signing Russell to a $100,001 annual contract — $1 more than Chamberlain. Given that no player in any of the four most popular American sports leagues have ever won as many titles as the Louisiana native, it was money well spent.

Of course, Russell’s post-Celtics coaching career was less than exemplary. In four years with the Sonics, he finished with a record of 162-166 — then went 17-41 11 years later with Sacramento.

Haywood, who played for him at the time, said that if Seattle lost the previous night 127-126, Russell would make the team run 127 laps before practice began. Not everybody was a fan.

“He was doing all this stuff like it was fun, but a lot of the guys didn’t get it,” Haywood said. “I was raised by a coach, so I was like ‘hey, it’s good,’ but that wasn’t the case for other guys.”

That’s not what Haywood remembers most about his time playing for Russell, though. His most salient memories are from when he and his coach would go out for a late dinner at 13 Coins, and Russell would hearken back to the racial discrimination he and fellow Black athletes would face during his playing days. Then he would discuss the steps he would take to try and instigate change — whether it be marching in D.C. with Martin Luther King Jr. or standing by Muhammad Ali after he refused to be drafted during the Vietnam War.

NBA Hall of Famer Lenny Wilkens has similar recollections. Wilkens took over coaching the Sonics shortly after Russell departed, and led them to their only championship in 1979. Wilkens noted how fun it was to compete against Russell when the two were playing. He watched how Bill and the rest of the Celtics complemented one another and tried to incorporate that harmony into his coaching style. But when asked how Russell most impacted him, Wilkens went beyond basketball.

“He wasn’t afraid to speak up,” Wilkens said. “He expressed his opinion, he stood up for the players — he was an incredible person.”

Right now, a whole lot of people are speaking up and expressing their opinions of Bill Russell. And like Wilkens, all are saying what an incredible person he was.