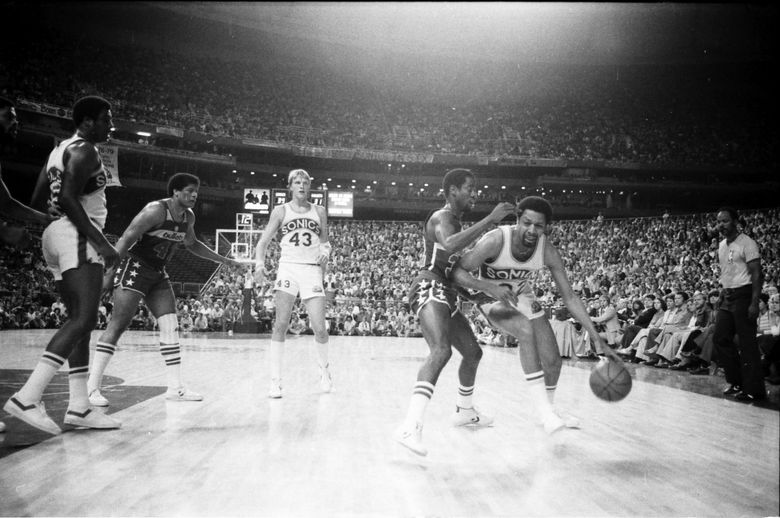 Fred Brown drives to the basket as the Sonics play the Bullets in the 1979 NBA Finals on May 27, 1979 in Seattle. (Richard Heyza / The Seattle Times)
By
Percy Allen
Seattle Times staff reporter

Four decades after the Sonics won the 1979 NBA title, there aren’t many stories that haven’t been told, retold, edited, embellished and forgotten.

But there’s one account Jack Sikma kept to himself — until recently.

On the eve of Game 6 in the Western Conference finals against the Phoenix Suns, who led 3-2 and needed a home victory to close out the best-of-seven series, Seattle’s star center sat in his hotel room and had what some would call a panic attack.

“It was the most pressure that I ever felt in my life,” Sikma said. “It was a very lonely evening with myself in the room and the thoughts that run through your head.

“Just grinding on the situation. I still remember, I tried to read a book. I tried to take my mind off of it and it came back to me every time. I just couldn’t shake this feeling that we were losing the series and our season might end and it was my fault.”

Inexplicably, the 23-year-old standout who was the No. 8 overall pick in the NBA draft in 1977, struggled in the previous games against Suns rookie Joel Kramer, who replaced injured Phoenix star Alvan Adams in Game 3.

Suddenly, Sikma — who averaged 15.6 points and 12.4 rebounds that season — couldn’t make a shot and his downturn coincided with the demise of the Sonics, who won the first two games of the series before losing three straight and faced elimination.

“I’ve never talked about that particular night with the guys, but I’m sure we all had tough times during that season when we’re struggling,” Sikma said. “Win-or-go-home type of situations magnify those thoughts and emotions.

“I was up all night until finally I came to the realization that all I’m doing is exhausting myself and you got to let this go. The reality was either you get it done or you go home. It was one of those periods of times that real growth happened in my life.”

The next night, the Sonics rallied in the fourth quarter and survived a potential buzzer-beater to claim a 106-105 victory that gave the Suns their first home loss in 10 weeks. Four days later, Seattle prevailed 114-110 in Game 7, which set up a rematch against the defending world champion Washington Bullets.

“When we beat Phoenix, the weight of the world was off and we could just go play,” Sikma said. “That carried us through.”

Washington, which had the NBA’s third-highest scoring offense (114.9 points per game), compiled the best record in the league at 54-28 thanks to a veteran team led by future Hall of Famers Elvin Hayes and Wes Unseld as well as All-Star Bob Dandridge.

But the Bullets were no match against the defensive-minded Sonics, who allowed a league-low 103.9 points and were second in the NBA with a 52-30 record.

“I don’t think people realize how good we were defensively,” said Lenny Wilkens, who spent three seasons (1969-72) in Seattle as a player-coach before returning full-time as a coach in 1977. “That year we were number one in defense. We were also near the top of the league in assists.

“Our bench was very strong. I felt like we could go deep into our bench and guys came in and produced.”

Unlike today’s NBA, where champions are built around megastars, the Sonics were a team devoid of marquee names in the game at that time.

Sikma and Dennis Johnson were All-Stars that season, but no Seattle player was voted to the first or second All-NBA teams. Seven Sonics averaged double-digit points, with guard Gus Williams leading the way with 19.2 points.

“We played together and we defended,” Wilkens said. “We understood about rotations and trapping. We knew where to go and when to go because we worked on stuff like that. And the guys were willing to play their roles. Every guy understood what his role was when he stepped on the floor.”

The Sonics were a collection of young players on the rise (Sikma, Dennis Johnson and Williams) and aging veterans in Paul Silas, John Johnson, Fred Brown and Dick Snyder, who accepted lesser roles.

“Fred was starting before I came in and he was very receptive when we talked about him moving to bench,” Wilkens said. “I told him that he could bring us a dimension that no team had, which was scoring.

“Paul responded very well because he knew me and we had played together. The fact that guys were willing to play their roles and do the things necessary for us to win made the difference.”

Williams, a speedy long-range marksman, paired in the backcourt with Johnson, a defensive stopper tasked with guarding greats such as George Gervin and David Thompson.

After 23 games, forward Tom LaGarde suffered a season-ending knee injury and was replaced by Lonnie Shelton, who comprised a frontcourt alongside John Johnson and Sikma.

“Paul had such command of that locker room,” said Sikma, a 6-foot-11 player who thrived after moving to the post. “So did JJ. And his versatility, the way he was able to grab a rebound and just take off and start the fast break, made us different. Teams weren’t doing that back then.

“We could get out and run at any time. We had four guys direct the offense in Gus, Fred, DJ and JJ. … Then we had bangers down low with me, Lonnie, Paul and Tom before he got hurt.”

LaGarde’s injury was the most significant hiccup during a regular season in which the Sonics overcame a six-game losing streak in December and a 4-10 record during a 14-game stretch in late February.

“There was nothing preordained or scripted, but because of everything we went through the previous season we kind of felt like we had seen it all,” Sikma said, referencing a 5-17 start in 1977-78 before Wilkens took over for Bob Hopkins. “That year was more like a roller coaster, with highs and lows, whereas (1978-79), we knew we had a good team capable of winning it all and it was just a matter of going out there and playing to our potential.”

Get your own Sonics commemorative poster and phone background

Seattle received a first-round playoff bye before easily claiming a 4-1 victory in the Western Conference semifinals over a Los Angeles Lakers team led by Kareem Abdul-Jabbar, who won the MVP award in the 1975-76 and 1976-77 seasons.

After the Sonics got past Phoenix, the stage was set for the league’s two best teams to reprise the 1978 Finals that ended with a heartbreaking 105-99 defeat in Game 7 at Seattle Center Coliseum.

“We had that last game in our building and we couldn’t get it done,” Wilkens said. “Anytime you have the last game of the season in your place, you think you have a good chance.

“No question, that one hurt and gave us a little extra motivation to get it done the next year.”

However, Larry Wright came off the bench for the Bullets and scored a team-high 26 points, including the winning free throws with a second left for a 99-97 win at the Capital Centre.

“You know when I thought we had them?” Wilkens would say later. “When we came back from 18 points down in the third quarter in Game 1 in Washington. I never really worried after that.”

The Sonics suffocated the Bullets and seized home-court advantage with a 92-82 road win in Game 2.

Washington squandered its best chance to get back into the series in Game 4 when Seattle captured a 114-112 overtime victory at the Seattle Center Coliseum. Williams finished with 36 points and Dennis Johnson had 32, while Sikma tallied 20 points, 17 rebounds and five blocks.

“I think the knockout punch was delivered tonight,” said Dennis Johnson,  who would go on to win the Finals MVP award.

Three nights later on June 1, the Sonics overcame a 30-19 deficit in the first quarter and, thanks to clutch shooting from Brown, pulled away in the fourth for a 97-93 victory.

After the final buzzer, Williams, who averaged 28.6 points in the Finals, threw the ball high into the rafters before running into the locker room for a champagne celebration.

A crowd estimated at 30,000 greeted the Sonics at the airport when they returned to Seattle.

Three days later, on an overcast Monday afternoon, the city celebrated its first major professional sports championship since the 1917 Stanley Cup with a 16-block parade from Pioneer Square to University Square that drew an estimated 300,000 spectators.

“I remember there wasn’t a whole lot of police and security like you would see at those things now, but no one got hurt and nothing was damaged,” Wilkens said. “It was like a lovefest.”

So much has changed since that summer of 1979.

And the Sonics moved to Oklahoma City in 2008, which has left Seattle without an NBA team for the foreseeable future.

Anniversaries provide opportunities for the team to reunite, like they will on Saturday for a 40-year celebration at the Mariners game and a dinner organized by former team captain Brown.

They plan to return to Seattle in August for Wilkens’ celebrity auction and gather once more in September when Sikma is inducted into the Naismith Memorial Basketball Hall of Fame.

“Personally, this has been a great year to look back at what I consider that crowning achievement of my career,” Sikma said. “We enjoyed playing together. We tasted tough times and we experienced a lot.

“Because of what we went through, I’ve never been more connected with a group of people. That was such a special time.”

Correction: An earlier version of this story incorrectly stated Frank Furtado had died.