And so it begins again …

After a four-day break, the hottest team in baseball returns to the field Friday night riding a 14-game winning streak and will be playing in front a sold-out crowd at T-Mobile Park.

Even the most optimistic member of the Mariners wouldn’t have predicted this situation on June 19.

On that day, the Mariners wrapped up an abysmal 11-game homestand by getting shut out 4-0 by the Angels in a dismal performance to fall to 29-39. Fans who remained in the stands booed the effort when the game ended. They finished that homestand with a 3-8 record that included losing four of the last five games to their American League West rivals.

“It’s a do-good business, a do-good league,” Mariners manager Scott Servais said after the game. “If you do good, everybody sticks around and is happy. If not, then you look to make changes.”

There was some thought that changes to the coaching staff might be coming on the next day — an off day.

But no change was made.

The Mariners won their next game in Oakland and have lost just three times since that awful homestand. That 22-3 stretch of baseball and the current winning streak, which is the second longest in club history, catapulted the team back into baseball relevance. They hold the second wild-card spot in the American League and sit a half game behind the Rays, who have the first wild-card spot.

On June 19, the Mariners had a 5% chance to make the playoffs per FanGraphs’ postseason projection. They now have a 67% chance.

This team’s record and place in the standings is where many expected they would be coming into the season. With the addition of Robbie Ray and the acquisitions of Adam Frazier, Jesse Winker and Eugenio Suarez, the Mariners felt they had put together a talented roster capable of ending their 21-year postseason drought.

That it took a stretch of almost unprecedented winning in the club’s history was unexpected.

The Mariners’ unique path to their current situation has certainly rejuvenated a fan base that had felt letdown once again.

But can they continue it?

Obviously, the streak will end at some point, because that happens in baseball. And a regression from an .880 winning percentage can’t be avoided.

It could come immediately after the All-Star break. It won’t be because of lost momentum but quality of opponent.

In the Mariners’ first 20 games of the second “half” of the season, 13 will be against the Astros and Yankees, the teams with two best records in the American League.

The other seven games are three vs. the Rangers at T-Mobile Park to close out a homestand and four games in three days vs. the Angels (Aug. 5-8).

After those first 20 games, the Mariners have just 15 games against teams that have a .500 record or better and 34 against teams with losing records, including their last 20 games of the season.

Based on current records, the Mariners have the seventh easiest remaining schedule in MLB. Of their possible competition, the White Sox have the second easiest with 38 games remaining against teams with losing records.

Race for the wild card

With the emergence of the Orioles (46-46), the teams in the American League East have some of the toughest schedules remaining with no teams under .500. The Red Sox have the second-most difficult schedule with only 16 games vs. teams with a sub-.500 record. The Rays have the fourth-most difficult schedule with 15 games against the Yankees and Astros remaining and 20 games against sub-.500 teams.

The Mariners could also be at full strength by Aug. 1 for the first time this season.

On his weekly radio show on Seattle Sports 710, Jerry Dipoto, the Mariners president of baseball operations, said that outfielder Kyle Lewis will be activated from the concussion injured list after missing the last 44 games. He will bring a right-handed power bat to the lineup.

Dipoto also said that Mitch Haniger will begin a rehab assignment with High-A Everett on Friday, which means he could be back in about two or three weeks.

The addition of Lewis and Haniger would make the lineup formidable. 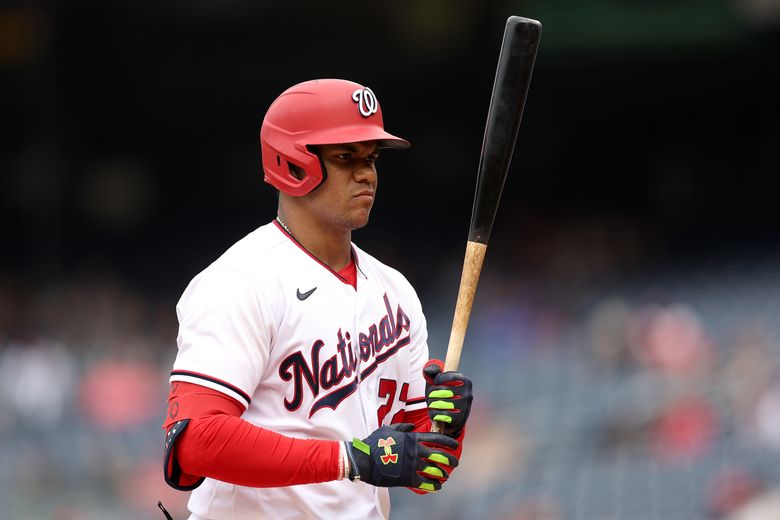 With George Kirby pitching on an innings limit and Logan Gilbert also having a limit to his usage, the Mariners need another starting pitcher who can help in the push to get to the postseason.

The Mariners had interest in acquiring right-hander Luis Castillo of the Reds and Frankie Montas of the A’s during spring training. That hasn’t changed — though the asking price might be higher than they’d prefer.

While several Mariners teams have had winning records after the All-Star break in the past, the excitement surrounding this team and its future is higher than at any point since Dipoto and Servais took over in 2014.

“It’s an exciting time to be a Mariners fan,” Dipoto said.

And it continues on Friday.