Though the Mariners’ success in 2021 was unexpected to everyone but to those in their clubhouse, they now must find a way to sustain it in the “second half.”

It means overcoming the same roster holes and inadequacies that have lingered from the start, the injury issues to the starting rotation, the baseball metrics saying that a regression to their win-loss record is coming and their own inexperience of playing in this situation.

When they return to the field Friday at Angel Stadium, the Mariners will have a 48-43 record, which is good enough for third place in the American League West, sitting seven games back of first-place Houston (55-36) and 3½ games behind second-place Oakland (52-40). 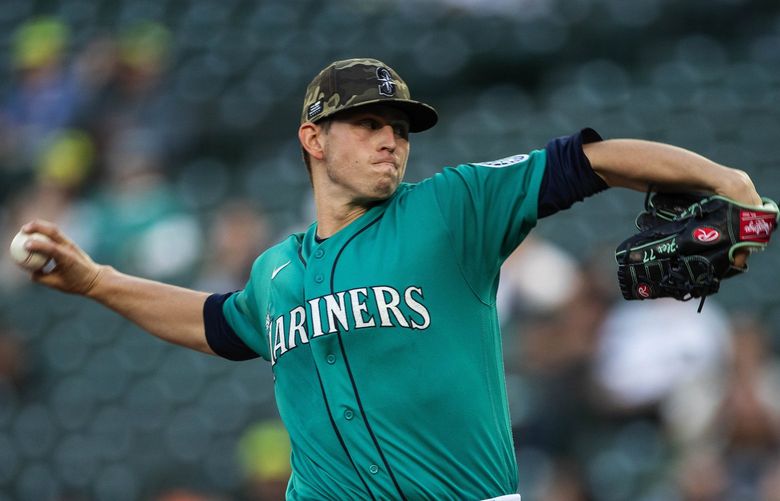 “We’re playing good baseball, and we continue to get better,” manager Scott Servais said the day before the All-Star break. “And that’s what excites me because I think we’ve got room for growth yet with this club as these guys get more experienced. Now we need to stay healthy.”

Servais didn’t speak to such concepts as snapping a postseason drought that dates back to 2001. He has maintained this team is capable of playing meaningful games in September though the definition of meaningful can be relative to the situation.

The players aren’t quite as cautious.

“Nobody expected us to even win (this) many games, so we were feeling really good,” shortstop J.P. Crawford said. “Nobody is really messing with us right now. We’re on a roll, and we don’t hear the outside noise. We stick to our group. We come in here each day putting in the work before the game and getting after it when the game starts.”

With the reports that Hector Santiago’s 10-game suspension has been upheld after his appeal hearing, the Mariners will be at a disadvantage for their first 10 games back. Not only will they not have the versatile Santiago, who could’ve filled the open spot in the starting rotation due to Justus Sheffield’s arm and oblique injuries, but they won’t be allowed to fill his roster spot due to MLB’s more stringent penalties.

Having 25 players on the active roster instead of 26 is less than ideal for the Mariners considering they already needed to tweak the roster before the series opener in Anaheim. General manager Jerry Dipoto confirmed that outfielder Jarred Kelenic will be recalled from Class AAA Tacoma. To make room for him, one of the 10 relievers on the roster would have to be removed. Since Santiago is suspended, that leaves eight relievers for Seattle in the bullpen. With no realistic option in Tacoma to take Sheffield’s spot, the Mariners may try to piece together a bullpen start when his turn in the rotation comes around July 21 vs. the Rockies at Coors Field.

“We don’t have a natural solution to that right now,” Dipoto said. “It’s going to be some combination of the bullpen, guys from Triple-A who get an opportunity and, as we continue to knock on doors around the league, whatever we’re able to do to find a little bit of help because it is something we want to tap into.”

MLB sources have said that the Mariners have been contacting teams looking for passable starting pitching help in return for cash considerations. Most of those type of pitchers have some level of MLB experience and are currently with Triple-A teams. This would be a stopgap move with the hope that right-hander Justin Dunn (shoulder strain) could return to fill that spot in a month.

Beyond the immediate of weathering Santiago’s suspension, the bigger question looming is what Dipoto and the Mariners will do in the days before the MLB trade deadline.

Will they be buyers or sellers (or both)?

“Like I always do, thoughtfully, and do the right thing for the team,” Dipoto said. “We will always weigh the present with the future. And the present means something to us, it does. This team is playing incredibly well. And if we have the ability to help the team in the short term, we will.”

A wish list of acquisitions includes a proven starting pitcher who can help this season and beyond or perhaps another infielder at either second base, where Dylan Moore has struggled, or first base, where Evan White is expected to be out for the season with a hip injury that likely requires surgery. Seattle is holding out hope that Kyle Lewis returns from midseason knee surgery by August, but he has yet to start baseball activity in his recovery.

It seems unlikely that Dipoto will part with any of his top prospects in a package to get a proven starter like German Marquez of the Rockies.

“The one thing we’re unlikely to do is detract in a major way from our long term, because that is why we’ve gone through for the last two years what we’ve gone through, and it’s starting to bear some fruit,” Dipoto said. “I’m really pleased with where the team is. We will be aggressive in trying to find some help, but don’t know how realistic that is until we really dive into that pool.”

But players can be acquired without giving up prospect capital by taking on salary.

Given the fact that the Mariners approached this past offseason with a parsimonious philosophy instilled by former CEO Kevin Mather, who revealed as much in his infamous Zoom call with the Bellevue Breakfast Rotary club, it would behoove Mariners chairman John Stanton and the minority ownership group to show skeptical and beleaguered fans a willingness to take on payroll for the right player.

Even with the team’s success, there is a belief that Dipoto might still trade outfielder Mitch Haniger, who will be a free agent after the 2022 season, third baseman Kyle Seager or any of his relievers on one-year contracts, who are pitching well this season, like Kendall Graveman, Drew Steckenrider and Paul Sewald as part of his rebuild plan.

Dipoto also will have to weigh the ramifications of what trading an established player like Haniger, their best overall producer on offense, or Graveman, the team’s closer and leader of the bullpen, might have on a such a young team that relies so heavily on emotion. It certainly would send a mixed message to players who refuse to view the team as rebuilding any longer.

“I think that would hurt us,” Crawford said. “It would be excruciating. That would suck. We need Mitch. He is one of our leaders. He comes in and a lot of our outfielders look up to him the most. We need him on our team.”

The Mariners will play 12 games leading into the July 30 MLB trade deadline, including three against the Angels, four huge games vs. the A’s and three vs. the Astros. Those 12 games could determine what Dipoto does at the deadline.

Making no moves with the premise of keeping the rebuild intact would not sit well with the players, who were already irritated that ownership wouldn’t give second baseman Kolten Wong an extra year or sign Taijuan Walker to the two-year contract he was asking for this offseason.

As Seager said during spring training, “At some point, it has to be about winning.”

Regardless of how they did it, and how unsustainable their success appears to be, the Mariners have won enough to put themselves into this opportunity to be part of the postseason discussion. Whether the front office and ownership believes in this group enough to invest in these last 2½ months of the season in a way they didn’t before the season remains to be seen.