Stop me if you’ve heard it before, but this is the year.

Really. Truly. It’s time for the Mariners to end the playoff drought that has become their albatross, and their shame. Beyond time. And this is the year they have the talent, the experience and the circumstances to get it done.

Yes, this sentiment is more aspirational than it is a definitive prediction. I’ve seen enough Mariners teams over this fallow, two-decade stretch that were touted as postseason contenders (sometimes by me!) only to flame out in spectacular fashion. In fact, it is an inescapably cruel reality that the closer the Mariners have intermittently gotten to the promised land, and the more aggressively they’ve tried to close the gap in the offseason, the more heartbreakingly awry has the following season gone.

I’ve chronicled this before, so I’ll spare you the gory details, except to say that in the five previous winning seasons they’ve had since 2003, and not counting 2021, the Mariners have lost an average of 93 games the following year. That has included some of the most depressing, frustrating and divisive seasons in club history. 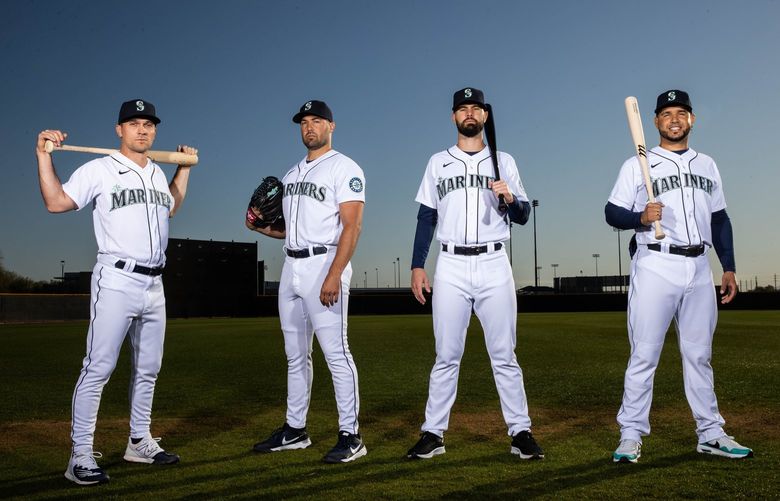 Yet this season feels different, which might be a naive/foolish/wishful statement by me. I know that many fans have been instilled with an unwavering fatalism, which dictates that if the Mariners did it, it must be wrong, and that some sinister force will always materialize to thwart their success.

This is entirely understandable when you look at the team’s recent, and now not so recent, past. The bad years, which have been most of them, speak for themselves. But the “good” years have been, in their own way, even more frustrating. Here’s a look at the eight winning seasons the Mariners have had during their streak of 20 seasons without making the playoffs:

In Lou Piniella’s last season and coming off 116 wins, the Mariners started 17-4 to build a 5.5-game division lead. They were still up five games July 4 and didn’t fall into second place until Aug. 23. They went 16-18 the rest of the way, finished 10 games out of first and six games out of the wild card as the A’s shot past them with a 20-game winning streak.

In Bob Melvin’s first season they led the division by seven games July 5, fell out of first Aug. 27 and finished three games behind the A’s and two games behind the Red Sox for the wild card.

Mike Hargrove shockingly resigned as manager July 1 in the midst of an eight-game winning streak. A win Aug. 21 in Texas under new manager John McLaren gave the Mariners a three-game lead over the Yankees for the wild card and pulled them within one of the division lead. They proceeded to lose nine in a row, 13 out of 14 and finished six games behind the Angels and Yankees.

In first place May 5 under Don Wakamatsu, they lost nine of the next 10 games to finish an uncompetitive 12 games back in the division, 10 back in the wild card.

With Lloyd McClendon at the helm they finished one game out of the wild card. A five-game losing streak with nine games to go did them in.

In Scott Servais’ first year they were two games out of the wild card with two to play but lost both.

They unexpectedly entered the final three games guaranteed of a playoff spot if they could sweep the Angels. They lost two out of three and finished two games back in the wild card.

From that latest near-miss, however, the Mariners have gotten demonstrably better — maybe not enough to satisfy playoff-starved fans but certainly enough better to take that ever-elusive final step into the playoffs.

They have added the American League’s Cy Young Award winner Robbie Ray to a rotation that could be formidable, especially if rookie Matt Brash approaches his potential.

They have added Adam Frazier and Jesse Winker, both .300 hitters in 2021, to augment a lineup that had major holes last year, and hope Eugenio Suarez can replace Kyle Seager’s numbers at third base.

Much of the Mariners’ fate will be determined by how well they can replicate their bullpen success of a year ago, and how much contribution they get from their two mega-prospects, Jarred Kelenic and Julio Rodriguez.

And that’s why I say this should be the year. The old saying about bullpens being volatile from season to season doesn’t have to be a portent of doom. I look at their bullpen and see two new power arms in Ken Giles and Andres Munoz. There’s a tremendous amount of depth, even with the significant loss of Casey Sadler. The bullpen can still be a tremendous strength — and will have to be.

And I don’t see why Kelenic and Rodriguez can’t be huge contributors. Everything in their development and prospect DNA screams that they are going to be exceptional players. The Seattle fatalism says every Mariners prospect is doomed to underachieve, or flame out. The consensus of the industry is that these two are not only the real thing, but potentially franchise cornerstones.

Yes, that word “potentially” is doing a lot of work — and it has admittedly done a lot of shirking of responsibility, or downright malingering, over the years.

Yet I see a team that has developed a healthy disdain for the lack-of-playoff narrative, the likes of which I’ve never seen in Seattle before. It’s exemplified by Mitch Haniger’s declaration in his offseason Players Tribune message to fans that “we’re going to end this (expletive) drought.”

Conveniently, MLB added another playoff team to each league, improving the Mariners’ chances to do just that. That doesn’t mean they couldn’t discover new, even more diabolical ways to fall short. It’s what they do.

But not this year. To spin an old saying, all bad things must end.