Three days before the sports world shut down because of the coronavirus — March 9 to be exact — Justin Dunn made his third appearance of spring training against the Brewers at Maryvale Ballpark.

Piggybacking off Taijuan Walker’s strong three-inning start, Dunn was just as good, if not better, pitching three innings and allowing one hit with one walk and five strikeouts.

At that point, there had been zero discussion of switching to a six-man starting rotation for the 2020 season. So, while the Mariners said Dunn was vying for a spot in the opening day rotation, the guaranteed spots for Marco Gonzales, Yusei Kikuchi and Justus Sheffield and the signings of veteran right-handed starters Taijuan Walker and Kendall Graveman in the offseason made it seem like Dunn was destined for Triple-A Tacoma to start the season.

It seemed to work against the Mariners’ 2020 plan of giving their young prospects as much big league experience as possible. But there was a belief that Dunn would still get more than 100-plus innings of work at the MLB level even if he wasn’t a permanent part of the rotation. Then sports stopped.

When baseball finally resumed in July after a 3½-month hiatus, the shortened 60-game schedule and the quick ramp up to restart the season forced the Mariners to be creative. They wanted to make certain Dunn and Sheffield got the maximum amount of starts while keeping them and the rest of the staff healthy. That’s where the six-man rotation came into play.

It allowed the Mariners to get Dunn and Sheffield 10 starts, an optimal solution given the circumstances.

“This year was amazing in the sense I got a year to get up here and learn,” Dunn said after his final start. “And one of the biggest things I learned is that my stuff plays. But in order for my stuff to play, I’ve got to get it on the plate, I’ve got to get guys to swing. And if I can limit the free passes, I think I’ll have some success throughout my career. And so the main goal is going to be tighten up the mechanics and get the mentality of attacking from day one.” 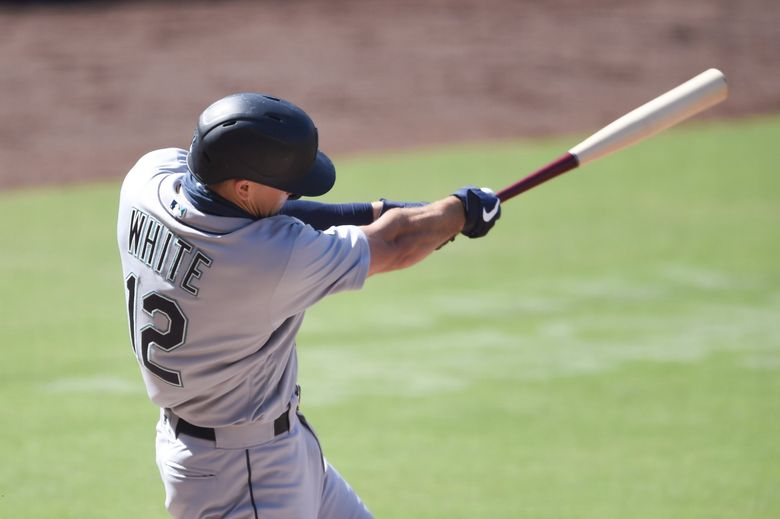 But unlike Sheffield, who cemented his place in the rotation moving forward with his 10-start performance, Dunn didn’t quite provide similar verification. His spot in the expected 2021 six-man rotation isn’t completely solidified. The emergence of lefty Nick Margevicius and potential free-agent signings could put him in a similar situation as last spring training, where he’s competing for a spot that might not be there.

With competing for the postseason now the Mariners’ goal, Dunn will have to raise his performance to a level that was only apparent in brief glimpses in 2020.

He had a shortened two-inning start vs. the Dodgers on Aug. 17, when he was struck by a line drive in the ribs in the first inning and unwisely tried to pitch in the second inning. He allowed five runs in the frame and six total runs in the two innings.

After that outing, he had a string of three quality starts, including back-to-back starts where he exited after six shutout innings and allowing one hit.

Of his 10 outings, four were quality starts and four were four innings or fewer.

“If you look at the young starters, you talk about Shef and Marge, I think you have a little clearer picture of exactly who they are. I don’t know if Justin has quite done that yet. His stuff this year, the velocity and the sharpness probably wasn’t as good as it has been in the past,” Servais said in a video conference near the end of the season.

Per FanGraphs, 50 starting pitchers in the American League pitched a minimum of 40 innings. Dunn’s minus-0.3 wins above replacement (WAR) ranked him 48th in that group, while his 4.34 ERA was 35th and his 6.54 Fielding Independent Pitching (FIP) was 50th. His 15.7 walk percentage was the worst in that group of starters while his 19.7 strikeout percentage was 40th giving him a 3.5 strikeout to walk percentage, which was the lowest.

“I think that the adjustments for Justin Dunn are pretty simple,” Servais said. “It’s much like they were for Justus Sheffield — it’s strike one. You’ve got to get ahead in the count. Justus has done a great job with it. Justin Dunn hasn’t been as consistent with it of getting strike one in there. And it’s not just with the fastball but being able to land your breaking ball as well.”

There were other concerns as well. Dunn’s ground-ball percentage was down 32.3 — the lowest of his career — while his fly-ball percentage was up 50.0, which is far from optimal. Per Baseball Savant, Dunn’s exit velocity allowed on balls put in play was 92 mph, which was in the bottom 2% of all MLB pitchers.

Dunn knew it was an issue and offered the reasons why his stuff on his fastball and slider didn’t stay consistently crisp.

“I think it was the three-month hiatus that we had due to COVID,” he said. “I came into (spring training) throwing around 95-96 mph, right where I wanted to be. I was in good shape. And I felt really good and was commanding the baseball well. I’m not making excuses with COVID. But I definitely think that it had something to do with it.”

Dunn tried to put a positive spin and shrug off concerns about diminished stuff and velocity while being adamant it was an anomaly.

“I think this year was a good year for me to learn how to pitch without it,” he said. “And to be able to have success up here without that type of stuff really gives me a lot of hope and optimism going forward. I’m really excited to come in next year after a full offseason of work and you know where I’ll be at and a lot of dedication to get to where I want to be.”

Dunn believes that his normal offseason routine will get him back to normal levels. He noted that having Margevicius living nearby to throw in the offseason will be a bonus.

Servais believes cleaning up mechanical inefficiencies may fix the issues.

“Our pitching coaches have talked about with him,” he said. “You don’t want to make big changes during the season. Those are things you focus on in the offseason, to see if we can get a little bit more to come out.”

But a handful of professional scouts noted that Dunn looks heavier, less flexible and less explosive than his days at Boston College and in the Mets system.

Another scout pointed out that Dunn had gained a fair amount of weight in the midsection and rear end going into the 2019 season, making him more rotational in his mechanics, which makes staying on line to the plate difficult. He also thought Dunn looked slower-twitch in his movement and mechanics while his arm speed on his pitches had disappeared.

“Even in his early Mets videos, he was way more athletic,” the scout said. “Now there’s just no life to anything that’s coming out.”

And while the dip in velocity is important, Servais mentioned that the growth of a viable third pitch, specifically a changeup, to work off the fastball — at whatever speed — and the slider, Dunn’s best pitch, must become prevalent.

“It’s going to be really important for him going forward,” Servais said. “On the days that he’s out there, as you’ve often seen, there’s going to be five or six left-handed hitters in that lineup. You’ve see him start to use the changeup, but I still think that’s going to be a key pitch for him as he moves on in his career.”

Dunn threw his changeup 50 times in 2020 (40 to left-handed hitters), and it had a minus-1.5 value as a pitch per FanGraphs, which means below average.

“I don’t want him to lose sight of the importance of the third pitch,” Servais said. “He really needs to focus on that changeup. You know, because the most of these teams are going to run the five or six lefties at him and it’s crucial pitch to get through that lineup a third time.”

Given the current roster and the organization, Dunn would be in a projected six-man starting rotation along with Gonzales, Sheffield, Kikuchi, Margevicius and top prospect Logan Gilbert. But is that rotation that finished the 2020 season good enough to reach Dipoto’s goals of competing for a spot in the postseason? And what happens if one of the pitchers gets injured or struggles?

Other than Gonzales, the other five pitchers have no track record of proven success beyond one season. Gilbert will also be on a closely-monitored innings limit.

Dipoto wasn’t adamant about acquiring starting pitching help this offseason in the same way he was about adding relief help. But the obvious need is there to add at least one, if not two, starters to the roster and probably another on a minor-league contract for depth in Tacoma.

At 24, Dunn is far from a finished product. This isn’t necessarily who he is as a pitcher. And he seems driven to fix the issues. With the Mariners’ loftier goals as a team, he will have do that and more to remain a part of it.