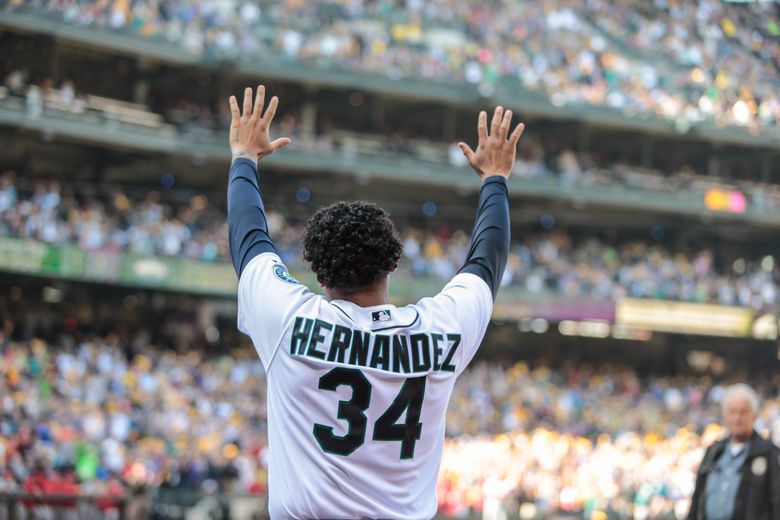 THE KING'S FAREWELL The end of Felix Hernandez's long, complicated journey in Seattle

Felix Hernandez acknowledges the crowd in a 2014 game in which it became apparent the Mariners would not reach the postseason yet again. (Dean Rutz / The Seattle Times)

This mutual parting of ways, at least in the beginning, seemed unimaginable to those who can remember what it was like when it was good.

Yet the sobering reality of the end to this relationship became apparent three years ago.

On Thursday night, Felix Hernandez will make his final start for the team that pulled him from Venezuela, developed him into a prospect phenom, helped him become a superstar, made him the face of the franchise, paid him exorbitantly for those efforts and his unflinching loyalty, allowed him to often operate by his own rules, watched as he started to fade, tried — though too late — to convince him (and eventually force him) to change and now will bid farewell.

Cheers mixed with tears will permeate the night. The sinking feeling of our own impermanence will be unavoidable.

But it wasn’t supposed to end this way.

Hernandez will leave the Mariners without ever pitching in the postseason. His legacy and Hall of Fame hopes have likely been wounded beyond healing. For many years of his prime, the Mariners were negligent in surrounding him with mediocrity  based largely on the people that made baseball decisions and the people that paid them to make those decisions.

In a cruel twist of his baseball fate, when the Mariners finally surrounded him with requisite talent, Hernandez, despite the expectations, couldn’t lift his team into the postseason because of his below-standard performances. He wasn’t the lone reason they missed the postseason in those years, but had he been able to summon the real King Felix, his baseball resume wouldn’t have that glaring absence.

Hernandez’s career arc is fascinating and tragic. It’s Shakespearean in its triumph and turmoil. Meteoric rise followed by a steady fall with no vindication in the end.

Act I — The rise of royalty

In the beginning, there was more than hope — because hope carries with it the possibility of failure.

A slightly chubby kid, scouted at 14 by Luis Fuenmayor, Pedro Avila and Emilio Carrasquel, had an expectation of greatness. Bob Engle, the Mariners’ director of international operations at the time, oversaw his signing at age 16.

Avila believed Hernandez was destined to be something special. But it was Hernandez and his personality as much as his pitching that made everyone believe.

“He wasn’t an overzealous, bragging type of young man,” Engle said. “He was very confident in himself, and he carried himself very well. I thought he was very respectful with everyone. We had several opportunities to go to his home, and we could see he was raised right. All those things count.”

Hernandez rocketed through the minor leagues, dominating at every level. It was apparent: He was a phenom — a label held with regard in baseball. He was the next big thing for a city that saw previous big things, like Ken Griffey Jr. and Alex Rodriguez, force exits. To Seattle, Hernandez represented a generational talent and better days to come.

After 68 minor league appearance (58 starts) over parts of three seasons, Hernandez was called up to the Mariners. When he stepped to the mound at Comerica Park in Detroit, he was 19 years, 118 days old — just a little over three years after signing a professional contract.

“All hail King Felix. Hernandez worked five innings last night against Spokane, allowing just one run on two hits and striking out five. He also walked four, but it’s important to remember that he’s only 17 and facing much older competition, including some college players. I’m trying not to get too excited about him, but it’s difficult not to with the way he’s pitched so far.”

Hernandez first shrugged off the moniker, not wanting such a nickname at such a young age.

Fans loved him for his talent and blazing fastball that could touch 99 mph. But there was something more.

For all he could do with a baseball, that they could never hope to do on a video game, he seemed human. It was the way he pitched: fearless with a hint of recklessness. He didn’t want to win. He wanted to dominate. He loathed losing more than he enjoyed winning — and he really enjoyed winning.

He always made his emotions known, sometimes to his detriment. He couldn’t hide them, nor did he ever consider it. This is who he was: a competitor — fierce, combative, demonstrative and exuberant, sometimes all in one inning or even an at-bat.

Fans reveled in it.

They fed off the glove pounding, the screams after strikeouts, the fist pumps and dramatic points at teammates when they made a play behind him. He wanted it more than they did. And everyone wanted it so bad.

Act II — The coronation of a King

Hernandez’s rise to power wasn’t easy. His first full season after his debut, 2006, was disappointing. He reported to camp a whopping 246 pounds. He would later call that version of himself “Fat Felix,” and Fat Felix went 12-14 with a 4.52 ERA.

Heavy was the crown and body for a pitcher not ready to be a king.

Hernandez shaved off 20 pounds and reshaped his body from jiggling fat to lean muscle.

He was selected to six All-Star Games in that period and won the American League Cy Young Award in 2010 despite having a 13-12 record, helping defeat the idea that a win is a valuable metric for a pitcher. He led the American League in ERA (2.27), innings pitched (249 2/3) and quality starts (30). His 232 strikeouts and six complete games were second highest in the AL.

The Evolution of King Felix

During that span, Hernandez and the Mariners took their relationship to another level. On Feb. 12, 2013, Hernandez signed a contract for seven years and $175 million. The incessant rumors about when he would be traded or leave for free agency were quelled.

When Hernandez and his wife, Sandra, stepped out of the elevator for a news conference to discuss his contract, they were met by nearly every Mariners employee in the building, clad in King’s Court T-shirts and chanting his name. Hernandez was overcome by emotion. More tears followed in a heartfelt news conference where he pledged loyalty to the only organization and fans he’d ever known.

Act III — The end of his reign

It didn’t happen all at once. There wasn’t a seminal moment when you realized it was over, no major injury signaling the end.

Maybe it would’ve been better that way.

Instead, the decline started gradually and increased with a steady pace that he couldn’t slow, stop or even realize until it was too far gone.

Many could see it coming, even when Hernandez couldn’t or wouldn’t. The realization of a player’s baseball mortality finds them at different times, and it can leave them feeling forlorn. This seems to have hit Hernandez in this final season. Had that cruel epiphany found a way through the bravado and stubbornness earlier, maybe this final act of a brilliant career would have a better ending.

All careers end, but the timing can be postponed with commitment, understanding what you’ve always done doesn’t always work as you age. It’s not as if Hernandez, who logged more than 2,200 innings in 11 seasons by the time he turned 30, wasn’t surrounded by reminders and examples — he played with Ichiro, Raul Ibanez and Nelson Cruz, a group that played a combined 53 seasons (and Cruz is still going).

There were warning signs in 2015, despite going 18-9 with a 3.53 ERA. The pinpoint command of his sinking fastball and career-altering changeup started to show inconsistency. These weren’t one-offs, either. It became more prevalent. He struggled to consistently repeat his mechanics, leading to the ball diverging from its intended path.

His wandering command remained in 2016, with injuries seeping into his durability. He failed to reach 200 innings for the first time since 2007 and his 3.82 ERA was his highest since 2007.

After that season, the Mariners challenged him to change his offseason habits, including his conditioning and throwing routine.

Said one Mariners player on the condition of anonymity: “We all knew he needed to change. But he didn’t get it.”

Hernandez vowed it would be better, but it became apparent such promises weren’t kept.

An offseason spent training with New York-based trainer Iron Glenn Freeman yielded more bulk and a series of shoulder issues that limited him to 16 starts and a 4.36 ERA in 2017.

Hernandez scrapped that regimen and returned to his previous offseason routine in preparation for 2018, which yielded the worst season of his career — an 8-14 record with a 5.55 ERA and a brief demotion to the bullpen.

His relegation to reliever made sure an already tenuous relationship with the new front office would never be repaired. It was done.

The 2019 season will be his last with the Mariners. Hernandez knew it but wouldn’t admit it publicly until a few weeks ago. Both sides were ready to move on.

This season would be the most important of his career. Who would want an oft-injured pitcher in an obvious decline next season?

Did he realize the importance of the offseason to prepare him for the first show-me year of his career?

Hernandez arrived in spring training looking no different from the end of last season. His first bullpen session was so bad a team executive wondered if he had touched a baseball the entire offseason.

After a brief patch of early brilliance that provided hope, shoulder issues returned and a setback in his recovery kept him out three months. It was only then that he started to understand his baseball future was no longer his to decide.

Redemption, at least with the Mariners, is no longer a possibility.

The end is here.

The memories you keep of Felix Hernandez are your own. Do you hold the pitching warrior, who pledged loyalty to an organization that wasted his prime but still found greatness when his playing environment screamed failure, close to your heart? Or do you feel resentment toward a pitcher who got paid, didn’t do his best to fight off decline and never could make good on a playoff pledge?

It may change with time.

Hernandez will emerge from the bullpen Thursday night at T-Mobile Park. Aloe Blacc’s “The Man” will blare through the sound system:

It’s a thin line between love and hate

I’m a soldier standing on my feet

No surrender and I won’t retreat (this is my world)

Stand up now and face the sun

Won’t hide my tail or turn and run

It’s time to do what must be done

Be a king when kingdom comes

Well you can tell everybody

Yeah you can tell everybody

Go ahead and tell everybody

The final King’s Court, which will be one of the largest, will rise, chant his name and wave cards that say “Thanks!”

It will be his last time in a Mariners uniform as a player. His performance versus the A’s, good or bad, won’t define him or his time in Seattle. There are too many layers, too many emotions, too much joy mixed with regret. And when he’s done, the ovation will be loud and sincere.

It won’t be how Felix Hernandez or Mariners fans hoped this day would come, but it will end because it has to end.

And the rest, is silence.