ANAHEIM, Calif. — Racking up hits and scoring runs against Shohei Ohtani would’ve been difficult for the Mariners with their best possible lineup.

But beating the Angels ace with a lineup missing Eugenio Suarez, Mitch Haniger and Julio Rodriguez?

That bordered on the impossible.

The Mariners’ best hope for success was to keep the game close with Ohtani on the mound, build up his pitch count to get him out of the game early and try to beat up on the Angels’ beleaguered bullpen late in the game.

While Ohtani held them scoreless for seven innings, the Mariners got another quality start from rookie George Kirby to give them a chance to pull out a late victory.

But the Mariners’ depleted lineup failed to generate the big hit needed in the final two innings against the Angels bullpen in a frustrating 2-1 loss Saturday night.

The Mariners have opened their final road trip of the regular season with back-to-back losses and fell to 80-64 on the season. With the Blue Jays (83-63) and Rays (81-64) each winning on Saturday, Seattle fell to the third wild-card spot, a half-game back of Tampa. The Orioles (75-69) also lost, meaning they failed to gain ground in the wild-card race and remain five back of the Mariners.

The Mariners came into the day knowing that Suarez likely wouldn’t be in the lineup after exiting Friday night’s loss with a jammed index finger. But when morning X-rays revealed a small fracture, he was placed on the 10-day injured list. Servais had hoped Haniger would be able to play after back spasms have sidelined him since Sunday, but he wasn’t ready.

The third strike of the injury trifecta came when Rodriguez felt his lower back tighten up in the batting cage as part of his daily pregame preparation. The decision to scratch him came about 30 minutes before the 6:07 p.m. first pitch. 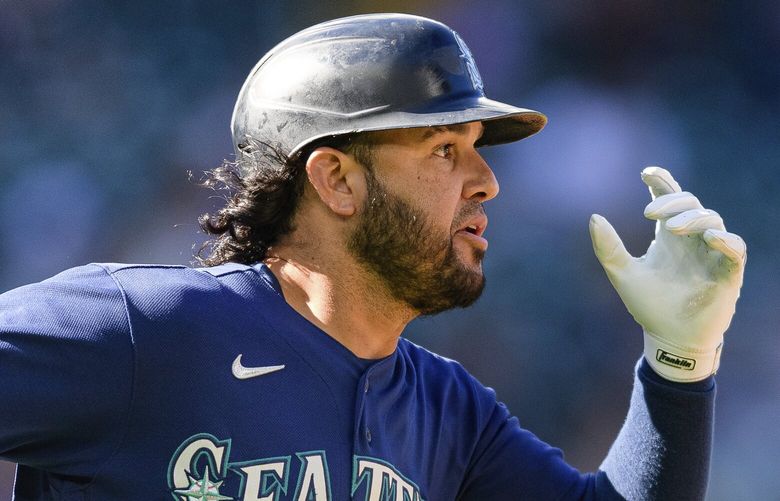 “He was getting ready for the game and it grabbed on him,” Servais said. “He did not feel good about it. Going forward, it’s really day to day. We’ll wait and see how he is tomorrow.”

They are the Mariners’ three most dangerous hitters when healthy.

“It happens,” Servais said. “That’s why you have a 26-man roster. You need everybody to step up and do their job. We pitched a really good ballgame. We were right there. We had a chance to win it. That’s all you can ask for.”

Changing the looks to his slider, using his split-finger fastball with two strikes and seeing outs available, Ohtani held Seattle to just four base runners on three hits and a walk. He never allowed a runner to reach second base.

“Ohtani has put together a really good year pitching-wise,” Servais said. “He’s one of the top arms in the league. The combination of the multiple shapes to his slider and obviously a lot of off-speed pitches, not a lot of fastballs to get on tonight. You’ve got to make adjustments and hit the slider.”

Kirby wasn’t quite as dominant. He pitched six solid innings, allowing two runs on four hits with a walk and eight strikeouts and took the loss to fall to 7-4 on the season.

He gave up a run in the first inning when Mike Trout dumped a single into right field and Ohtani hit a deep fly ball on a first-pitch fastball that went over left fielder Jesse Winker’s head twice — the first on the fly and the second when it bounced off the wall and warning track. The misplay on the carom allowed the speedy Trout to score from first base.

“It was a good fastball to Ohtani, but he was cheating to it I guess and put a good swing on it,” Kirby said.

Irritated but unfazed, Kirby retired the next eight batters he faced until a leadoff walk to Ohtani to start the fourth inning. It was Kirby’s first walk in 45 batters faced. Taylor Ward followed with a single and both runners advanced a base on a rare wild pitch from Kirby.

That loomed large when Matt Duffy hit a ground ball to shortstop that scored Ohtani from third. When Kirby ripped a 98-mph fastball past a flailing Mickey Moniak to end the fourth inning, he voiced his frustration as he exited the mound.

“I feel like they always come back to bite you in the butt,” Kirby said of the leadoff walk. “You got to really home in on the first batter of the inning. It’s got to be better next time and attack them a little bit better.”

The Mariners picked up their only run in the eighth inning when Taylor Trammell launched a towering homer to right field off right-hander Jaime Barria. Seattle seemed poised to tie the game if not take the lead.

Abraham Toro followed with a ground-rule double to left-center and J.P. Crawford worked a walk to put runners on first and second with one out. But Ty France was a little overaggressive on a first-pitch breaking ball out of the zone. He hit a comebacker to Barria, who fired it second base to start an inning-ending double play.

“There’s three at-bats in every game where it really comes down to it — whether you’re on defense or when we’re in the box — that could really tip the game one way or another,” Servais said. “You’ve got to win two out of three of those every night. We weren’t able to do it.”

The Mariners couldn’t scratch across a run in the ninth.

“I knew it was gonna be a close game, a low-scoring game,” Servais said. “I was just hoping to get a little bit more going there late and it would have been great if we got Ohtani out of the ballgame a little bit earlier, but he was able to get his pitch count in check.”