NEW YORK — With the adrenaline of his outing from Friday’s 2-1 victory over the Mets at CitiField still pulsing through his body, right-hander Paul Sewald couldn’t help but admit how much it meant to beat the team that drafted, developed and decided not to offer him a contract as an arbitration-eligible player.

Sewald entered the game with two outs in the seventh inning, replacing Marco Gonzales, who had left him runners on second and third and Starling Marte at the plate. With the game tied at 1-1, it was the key moment. With a crowd of 36,629 standing and roaring for Marte, Sewald struck him out swinging on a slider. 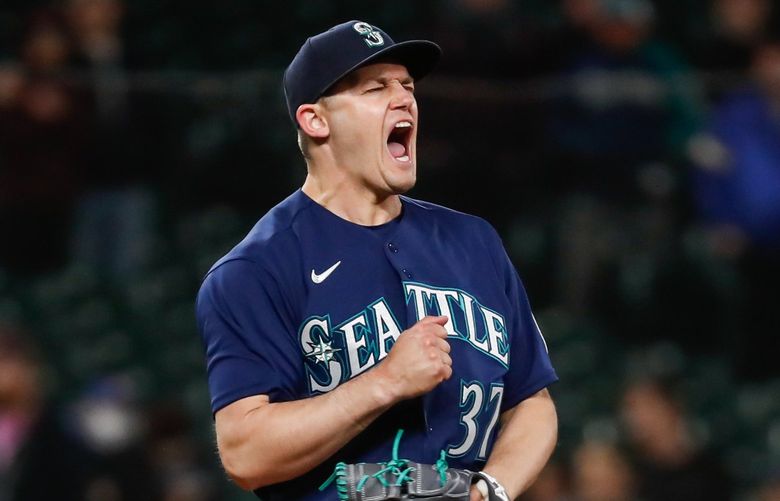 As he screamed in celebration and pointed to his family in the stands. Mets fans jeered at Sewald for his success with similar fury they used berate him for his failures.

“Fans weren’t a huge fan of me when I was here,” Sewald said.

After Ty France gave the Mariners a 2-1 lead, Sewald pitched a 1-2-3 eighth inning to set up Drew Steckenrider for the save in the ninth.

“This was 18 months coming since they got rid of me,” he said. “I was hoping that I can get out here and pitch against them. It’s pretty nice to do it really well and help our team get the win for it. There were just was a lot of a lot of emotions, positive and negative, when I was here, so it all just kind of came out.”

After he was non-tendered by the Mets after the COVID-shortened 2020 season, making him a free agent, Sewald signed a minor-league contract with the Mariners that included an invitation to MLB spring training. He was fascinated by the Mariners’ pitching analysts, who had a break down of his strengths and weaknesses, including a plan for his success.

He found success with the philosophy, but he still opened the season with Class AAA Tacoma and wasn’t added to the MLB roster until May 13, 2021. The Mariners initially used him in low-leverage situations, but he pitched his way into to a priority role with his ability to strike out hitters.

A Mariners bullpen that has yet to be at full strength this season lost another key reliever on Saturday when right-hander Erik Swanson was placed on the 15-day injured list with right elbow inflammation.

The Mariners recalled left-handed reliever Danny Young from Class AAA Tacoma to take his place on the roster.

Young never reported to Tacoma after being optioned on Friday morning. The Mariners knew there was a chance that Swanson could go on the injured list.

“He had an MRI taken and it’s not the ligament,” Servais said. “It’s just a little bit of nerve irritation is the best way I’d put it. He tried to play catch a little bit yesterday. He probably wants to give it a few more days. I don’t know how much we’re going to rely on our bullpen. We want to make sure we have a full cast of characters down there to go to if we need to.”

Swanson started feeling the discomfort after his last outing May 10. He had an MRI on Thursday morning in Seattle.

He has a 1.29 ERA, allowing two runs in 14 innings in 13 relief appearances. Opponents were hitting just to .192 (10-for-52) against him. Using a nasty split-finger fastball and adding a slider to go with his mid-90s fastball, he has just one walk and 21 strikeouts on the season.

“It’s not ideal,” Servais said. “He’s been throwing the ball so well. It’s really been awesome. It’s the best version we’ve seen of Erik Swanson and a lot of it had to do with the development of a secondary pitches.”

Another day, another trade with Giants

The Mariners made their fifth trade with San Francisco since April 26, sending outfielder Stuart Fairchild to the Giants in exchange for infielder Alex Blandino and cash.