ANAHEIM, Calif. — Even though Logan Gilbert’s routine between starts is strictly regimented to maximize his time at the ballpark, including daily stretching, conditioning and drills and movements that often leave his teammate shaking their head, he does allow for some time to relax or peruse social media.

On Monday, before he got to the Angel Stadium and into his daily work, he took a little time to watch videos of Felix Hernandez’s perfect game.

With it being the 10-year anniversary of Hernandez retiring all 27 hitters from the Tampa Bay Rays at then-Safeco Field, there was no shortage of content on Twitter and Instagram. And Gilbert found himself captivated by the highlights.

“It’s crazy,” Gilbert said. “Going through it, especially at this level, it really is perfection the entire game. What makes it crazy to think about is like one inning is sometimes hard enough, so to do that nine times in a game and do it over three hours or whatever, it’s just crazy to think about.”

Hernandez is the last pitcher to throw a perfect game in MLB. But he was the third player to do it in the 2012 season with two of them occurring in Seattle. 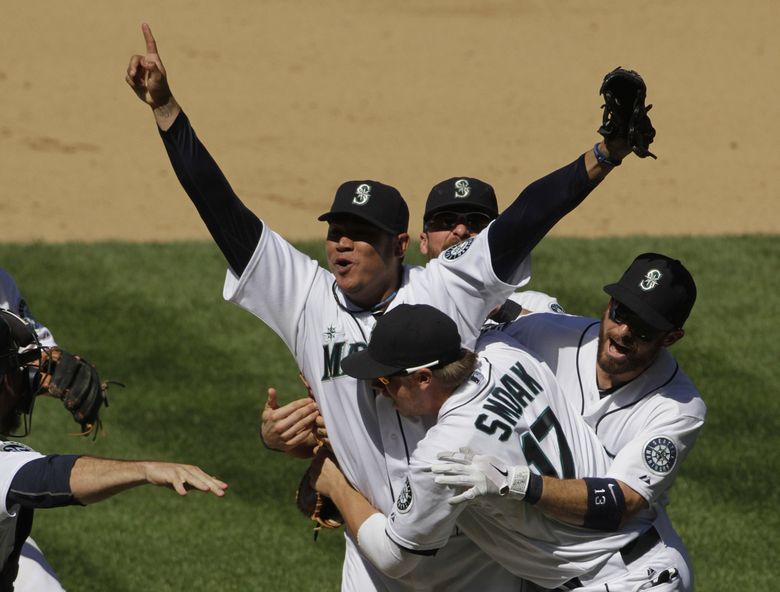 An imperfect decade: Why MLB has gone 10 years without a perfect game
Advertising

On April 21, 2012, Whites Sox right-hander Philip Humber, a former No. 3 overall draft pick who had experienced minimal success at the MLB level, didn’t allow a Mariners runner to reach base in a 4-0 win. He was the 21st pitcher to achieve the feat and the first since Roy Halladay on May 23, 2010. Humber threw just 96 pitches and struck out nine batters.

Roughly two months later, June 13 at AT&T Park, Matt Cain achieved perfection against the Houston Astros in a 10-0 win. He needed 125 pitches to finish it, largely because he struck out 14 batters.

And Aug. 15 on a sun-drenched afternoon, Hernandez, added to an already stellar pitching resume, by tossing the 23rd perfect game in MLB history on 113 pitches with 12 strikeouts in a 1-0 victory.

“I have to imagine that as it goes on past like four or five innings, you start thinking about it,” Gilbert said. “You start to get antsy and ready to go back out, stuff like that. It’s just impressive to think about.”

Paul Sewald got excited talking about the difficulty of the accomplishment.

“A 1-2-3 inning feels like you accomplished something,” he said.

Usually working one inning at a time, Sewald doesn’t recall a stretch in his career where he put nine appearances in a row where a runner didn’t reach base.

“I’m almost positive there have been less relievers that have done that compared to starters,” he said. “We only have three at a time for the most part. It’s so difficult to get 27 major league hitters out in a row. Just think about the luck you need. Even if you’re pitching great, and Felix’s stuff was A-plus-plus, but he still threw a couple balls down the middle that had to have gotten missed one time. No one can even get lucky on a ball in perfect game. The whole concept of a nine-inning perfect game in a major league game to me is crazy. It’s been 10 years without one.”

It was almost one day shy of 10 years. Rays starter Drew Rasmussen, who was born in Puyallup and grew up in Spokane, took a perfect game into the ninth inning Sunday. But he gave up a leadoff double to Jorge Mateo to start the ninth.

There have also been other perfect game bids that ended in the ninth inning since Hernandez’s perfect game.

On April 2, 2013, while pitching for the Rangers, Yu Darvish retired the first 26 Astros hitters he faced. But Marwin Gonzalez hit a ground ball between Darvish’s legs and up the middle for a hit.

Later that year, Sept. 3, well-traveled veteran Yusmeiro Petit, then with the Giants, was one out from a perfect game when Eric Chavez hit a sinking liner to right that Hunter Pence couldn’t quite grab despite a diving attempt.

On June 20, 2015, Max Scherzer lost his perfect game bid with two outs in the ninth inning while pitching for the Nationals. Scherzer threw a slider that Pittsburgh’s Jose Tabata let hit him for the first base runner.

For the Mariners, Mike Leake took a perfect game into the ninth inning against the Angels on July 19, 2019, at T-Mobile Park. But Luis Rengifo led off with a single to end his bid.

“It’s special anytime you can put anything like that together,” manager Scott Servais said. “No-hitters are one thing and they’re hard, but the perfect game is … I don’t even know how to describe it. I do think we’ll see another perfect game. It’s been 10 years, obviously, but they show up sometimes when you least expect them.”