OAKLAND, Calif. — For seven innings, the team that scored 17 runs over the past two games and banged out 25 hits was held hitless and seemed destined to be shut out for the 11th time this season and the fifth time in the last 12 games.

The Mariners escaped the ignominy of being no-hit with a pair of singles with two outs in the eighth inning.

They avoided being shut out and escaped defeat by scoring two runs in a crazy ninth inning where they didn’t register a single hit. In fact, the two balls they put in play in the inning were the first and third outs.

Paul Sewald secured a stunning 2-1 victory and a series sweep with a scoreless bottom of the ninth. 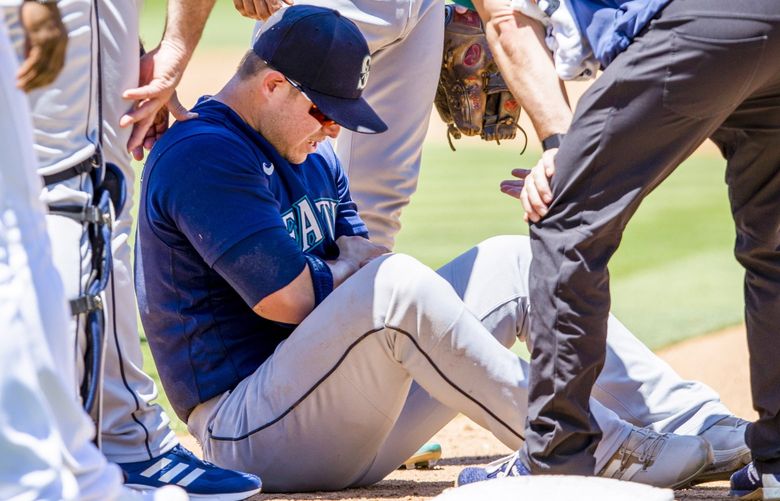 “That’s the definition of a grinding out a victory,” said Mariners starter Robbie Ray, who delivered another solid outing.

With closer Danny Jimenez on the injured list, the A’s turned to right-hander Zach Jackson to close out a 1-0 lead in the ninth inning.

Jackson walked Dylan Moore, got Julio Rodriguez to fly out to right, walked Jesse Winker and struck out Eugenio Suarez.

To counter, sort of, manager Scott Servais brought in Kevin Padlo to pinch hit. The recent call-up from Tacoma, who has all of 28 MLB plate appearance in his career, watched four pitches nowhere close to being a strike for a walk to load the bases.

That brought to the plate Abraham Toro, who has struggled for much of the season. With the game on the line, Toro never swung the bat as the Mariners tied the game. The first pitch from Puk was a wayward fastball in the other batter’s box that catcher Christian Bethancourt couldn’t snag. It went to the backstop allowing Moore to sprint home with the tying run. After eventually finding the strike zone for a pair of called strikes, Puk uncorked a ball in the dirt on a 3-2 count that allowed Winker to race home with the go-ahead run.

“With their closer out, they had to use some other guys who haven’t been in that spot before,” Servais said. “I thought our guys did a good job of being patient, making them throw the ball over the plate. They do have a history of being really erratic with their command and we let it play out. And sometimes that works better than if you chase it. We let the game come to us.”

The win was overshadowed by what at first appeared to be an awful injury to first baseman Ty France on a play that didn’t probably need to happen.

France injured his left arm in a collision while playing first base and was forced to leave the game in the fifth inning.

With two outs, Oakland’s Sheldon Neuse hit a soft ground ball to third base. Toro fielded the ball with his bare hand, firing to first base on the run. The throw leaked toward the home plate side of the base. As France stretched to grab the ball, his glove collided with Neuse. His arm was pulled back awkwardly, and he crumpled to the dirt in pain.

Servais and head athletic trainer Kyle Torgerson were quickly on the field to check on France, who was eventually helped to his feet and left the field cradling his arm.

After the game, Servais said that X-rays came back negative and that France would undergo an MRI on Friday in Anaheim.

“Just talking to our trainers, we are cautiously optimistic that maybe it’s not as bad as it looked,” Servais said.

“I didn’t hear him or see him coming,” France said. “I threw my arm out there and heard a crack, but I think that was my knuckle popping type of thing. It’s a little stiff right now, but that’s because I iced it and everything. Honestly, the morning will be the real test.”

The possibility of France, their best hitter, missing any sort of extended time with an injury is something the Mariners’ inconsistent offense simply can’t withstand particularly with Mitch Haniger and Kyle Lewis already on the injured list and not expected to return soon.

Did the Mariners get lucky with an injury … for once?

“All the strength is there,” France said. “We are playing good baseball right now and I’m feeling good at the plate. Hopefully, I’m able to get back out there.”

Why did the play not need to happen?

On the previous pitch to Neuse, Ray threw a 95-mph fastball down the middle that home-plate umpire Nic Lentz called a ball. It would’ve been strike three to end the inning.

A’s starter Frankie Montas had a serious flirtation with throwing the third no-hitter of the 2022 MLB season.

The hard-throwing right-hander, who the Mariners were interested in acquiring via trade during spring training but were deterred by the large asking price, used a mixture of high 90s fastballs, cutters and a nasty split-finger to generate early contact easy ground-ball outs.

Montas held the Mariners without a hit through the first seven innings, allowing just two base runners via walk.

In the eighth inning, Montas retired Trammell and Toro with ground-ball outs. Adam Frazier ended the no-hit bid moments later when he dumped a soft single to left field. Torrens followed with a crisp line drive single into center. Montas made it eight scoreless innings by winning a nine-pitch battle with J.P. Crawford and inducing a ground out to second base.

Over his eight innings of work, Montas struck out eight batters and collected 10 ground-ball outs. He’s expected to be the most coveted starting pitcher on the trade market, which kicks into gear in the coming weeks. The Mariners might face him in an A’s uniform only one more time on the upcoming homestand.

Ray couldn’t match the hitless or scoreless outing, but he gave his team another outstanding start. After allowing a first-inning run, Ray pitched the next five innings scoreless. He allowed just four hits with two walks and six strikeouts. In his last three outings, Ray has pitched 20 innings and allowed just one run.

It was the 21st straight start of three runs or fewer allowed made by the Mariners rotation, which is a club record.

“Guys are putting in the work,” Ray said. “It’s one guy after another. It’s just watching the guy that goes ahead of you. You just want to go out and do the same thing or better and just keep it rolling.”