Cheers? Jeers? Groans? Gasps? Screams of delight? And apparently from at least one female fan, letting out a “WOOOOOOOOO!!!!” after every pitch, which could be heard throughout the socially distant stadium and on the ROOT Sports broadcast.

The sounds of fans watching baseball at T-Mobile Park had returned. And the Mariners were so thankful about those 8,175 folks in attendance Thursday night for the first sporting event in the Puget Sound to allow fans in 13 months, they rewarded them with an improbable rally and an inning of free baseball to make up a little bit for what was lost.

Given all that transpired in the final few innings, the actual end of the Mariners’ 8-7 come-from-behind win over the Giants was a little anti-climactic. In the bottom of the 10th inning, Giants reliever Jose Alvarez walked three consecutive hitters — Taylor Trammell, Dylan Moore and Jake Fraley — to force across the game-winning run, which was Evan White, who started the inning at second base per the modified extra-innings rules for Major League Baseball.

As players swarmed Fraley at first base, the fans that remained — and few left early — stood and applauded the effort of a team that was now 1-0, but looked like they were going to start 0-1 for the better part of seven innings.

“I do have to say tonight, we were so excited for fans in the stands tonight,” Mariners manager Scott Servais said in a postgame video conference. “You guys made a huge difference in that ballgame. It’s not like turning up the crowd noise. It’s real. Our players felt that; the other team felt that. So I thank all of whatever it was the nine or 10,000 people that were in the stadium. Thank you. It’s great to have you back.”

The Mariners wouldn’t have been in that position to win in the bottom of the 10th inning if not for Mitch Haniger’s brilliant, sliding catch in right field that ended the top of the inning and stranding the go-ahead run on third base.

Playing Buster Posey to pull, Haniger had to run a long way to track down a ball near the foul line. But he offered a reminder of the talent level that has been missing from that spot since he was injured in June 2019.

“I was going absolutely crazy,” Trammell said. “It was sick. I’m a big believer in momentum in this game. There was no doubt in my mind that we were going to win this game.”

It was a deserving outcome for the first crowd to watch a game at T-Mobile Park since Sept. 29, 2019, when a crowd of 16,819 watched a bad Mariners team, put together with no intention of success, closed out a worse season with a 3-1 win over the A’s to finish with a 68-94 record. 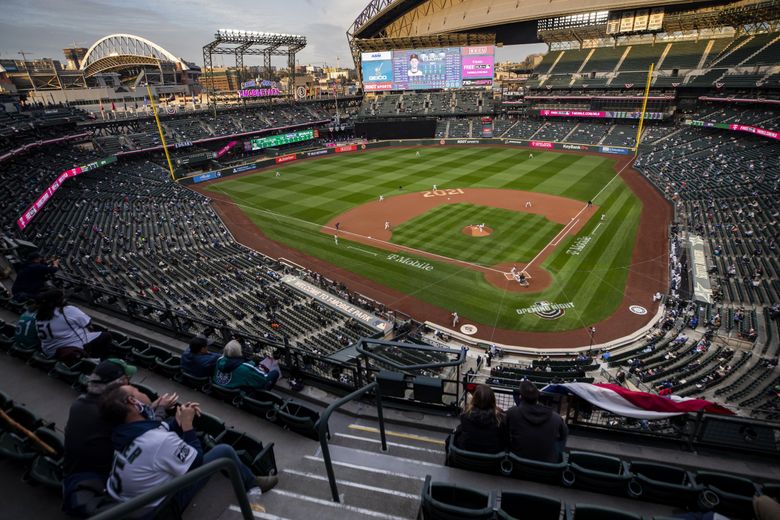 This current version of the Mariners should be better despite not garnering postseason predictions or expectations of snapping a 19-year playoff drought, and even their leadership often refers to the nebulous goal of “just getting better,” but many players, specifically starting pitcher Marco Gonzales, bristle at such minimal hopes.

Perhaps this sort of win where Gonzales wasn’t his normal pinpoint self in terms of command is indicative of that belief.

“That’s the whole emotion of this team is playing as a group,” Gonzales said. “And seeing these guys battle back, hang tough and put together some good ABs late. It was very, very promising for Game 1.”

After getting an unexpectedly supbar outing from Gonzales and finding themselves down 6-1 going into the bottom of the eighth inning, while offering minimal expectation for a comeback based on prior at-bats, the Mariners scored six runs in the eighth inning against a shaky Giants bullpen.

Ty France started the scoring with a bloop single to center, Trammell worked a bases-loaded walk against lefty Jarlin Garcia to cut the deficit to three runs.

“That nine-pitch walk against a really tough lefty,” Servais said. “It was pivotal.”

Facing side-armer Tyler Rogers, Moore ambushed a first pitch, driving a double to right field to score two more and cut the deficit to one, which Trammell thought was more important.

“I would say that sparked everybody,” Trammell said. “I was on first and when I saw that ball go past my head, I was like, ‘We are in business.’ “

The Giants looked like they might escape with a lead when pinch-hitter Jose Marmolejos hit a routine ground ball to first base with one out and runners on first and third. But first baseman Brandon Belt’s poor throw to second base to start what should’ve been an inning-ending double play couldn’t be caught by shortstop Brandon Crawford. It allowed two runs to score and gave the Mariners a 7-6 lead.

That lead lasted all of one batter in the top of the ninth. Making his debut as the Mariners’ closer, right-hander Rafael Montero made a costly mistake to the first batter he faced, pinch-hitter Alex Dickerson. After getting ahead 0-2 in the count, Montero left a change-up over the middle of the plate that Dickerson crushed over the wall in center to tie the score at 7.

Montero retired the next three hitters he faced and gave the Mariners a chance to win it in regulation. But Giants closer Jake McGee worked a quick 1-2-3 inning to force extra innings.

When the first pitch of the Mariners’ 2021 season, an 87-mph sinker from Gonzales stayed just above the strike zone for a ball, it wasn’t anything noticeable. When Gonzales’ second pitch, also a sinker, missed the zone in the same spot, it caused the Mariners’ ace to pause before throwing pitch No. 3, which was also a ball. That cutter also missed above the zone.

A 3-0 count to any hitter, let alone the first hitter of the season, seemed so anti-Gonzales.

Gonzales’ first strike of the season came on pitch No. 4, right on the inside corner. But that provided only momentarily relief, because the fifth pitch, another cutter, missed up in the zone for Ball Four and a walk.

A walk? From Gonzales? To the first batter of the season?

If you believe in baseball superstitions, this was not a good omen considering Gonzales faced 277 batters in 2020 and walked just seven. He faced one in 2021 and walked him.

Though that one walk didn’t lead to immediate disaster, or even a run, as Gonzales regrouped to strike out Michael Yastrzemski and coax an inning-ending, double-play ball from Donovan Solano, it was a precursor of issues — command and execution — that remained for the rest of the night.

Gonzales pitched six innings, giving up five runs and eight hits with three walks (one intentional) with two strikeouts. Three of those hits were solo homers. In the small sample size of 11 starts last season, Gonzales never walked more than one batter in a game. The three homers — two solo shots in the second inning from Evan Longoria and Posey and another from Austin Slater in the fifth inning — tied for the most he’s ever allowed in a game.

“I’m fighting through some timing issues and some things that I’ve been working on to get ironed out,” Gonzales said. “The goal after the third inning or so was to grind and battle and get us through six, keep us in the ballgame. I got faith in my guys to go out and battle back, but I certainly put us in a hole early.”