Maybe it was the “show-and-go” philosophy of their Little League days that helped them remember that no matter the grind and pressure of the marathon season, baseball is still supposed to be fun.

Maybe it was the calming presence of 1,089 dogs in attendance for the last “bark in the park” night of the season. The Mariners by and large are dog folks and perhaps those hounds provided some emotional support with their random barks and yelps heard in the crowd of 21,803 humans. 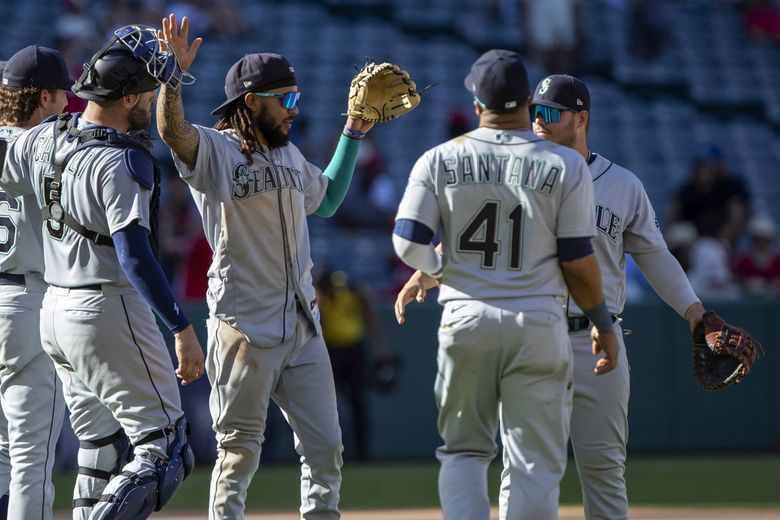 But really, it was the Mariners remembering how to play the level and style of baseball that has put them into position to end a postseason drought that’s old enough to drink.

The Mariners got a solid starting pitching effort from rookie right-hander George Kirby, lockdown work from the bullpen and just enough offense, led by Eugenio Suarez’s three hits, to grind out a 3-1 victory over the Rangers.

“Mariners baseball, that’s it,” manager Scott Servais said. “Five hits, five walks, give up one run and win the game, that’s it. A really good effort by our guys tonight and it has been a struggle here recently, but we got back to doing what we do and it’s controlling the strike zone.”

Having lost eight of their past 11 games coming into Wednesday night, the much-needed win came on an evening where the Blue Jays, Rays and most important, the Orioles, all lost.

It’s doubtful the Mariners all followed teammate Robbie Ray’s advice to avoid looking at the out-of-town scoreboard during the game.

But with the win over Texas and Baltimore’s loss, the Mariners’ magic number for clinching their first postseason spot since 2001 is down to three games, meaning any combination of Mariners’ wins and Orioles’ losses to reach three gets it done. That celebration could come as early as Friday night.

After a late arrival to the park, the Mariners, who have daily meetings, added a full-team meeting to go with the pitchers and hitters meetings.

“A lot of good meetings today with a lot of good discussions,” Servais said. “You find out a lot about people when things aren’t going great, and they haven’t been going great here. Our guys stepped up.”

Servais wouldn’t elaborate on the exact details of any of those conversations and it wasn’t a clearing of the air.

“It’s just the discussion you have with people,” he said. “When you spend so much time together, I mean, we are together every day for seven and a half months, you have those lulls. But there is a point in time where you have to call a spade a spade. I guess that’s what I did today.”

Servais wouldn’t credit the meeting for the win.

“Credit to our players,” he said. “They really want to win. They want to do something special here. We’ve had a nice year, but we needed to get it turned around. Hopefully, it turned in the right direction tonight.”

Kirby pitched six innings, allowing one run on five hits with a walk and four strikeouts to improve to 8-4 on the season. It was a solid performance after enduring his worst start of his season in his previous outing, lasting just 2 1/3 innings and giving up five runs in a loss to the A’s.

His only run allowed came in the first inning when new Rangers nemesis Josh Jung, who drove in all five runs in Texas’ 5-0 win over the Mariners on Tuesday night, singled home a run.

But the Mariners answered immediately in the bottom of the inning.

Dylan Moore led off with a walk and Ty France followed with a single off Rangers starter Martin Perez to bring Suarez to the plate. Both natives of Venezuela, Suarez and Perez are close friends.

After looking out of sync in his return from the injured list on Tuesday night, Suarez smashed a double over the head of center fielder Bubba Thompson to score Moore.

“He came in hard early and then went with the changeup,” Suarez said. “I was ready for it.”

France would tag up and score moments later on Mitch Haniger’s line out to center field.

“I mean obviously I love to face him,” Suarez said. “I know he’s had a great year, but I kind of know how he pitches to me. That made me feel more comfortable. I was ready to compete against him. We had a conversation the other day here and we just talked about taking it easy. I just told him I need my hits.”

He had three of them on the night, which offered some relief for the Mariners, knowing his importance. Suarez also hinted that he might be ready to return to third base as soon as Thursday.

“I feel great,” he said of the fractured index finger on his throwing hand. “There is no pain. I just feel normal.”

The Mariners tacked on a third run in the third inning. Carlos Santana’s ground out to short with the bases loaded allowed France to score.

That was the last of the run support from the offense. But Kirby worked around some hard contact in the second and third innings and the bullpen made it stand up.

“They first couple of innings George was not as sharp as we’ve seen him, but he made a nice little adjustment in third inning,” Servais said. “The command came back with the two seamer and he got all of his pitches working.”

“I just wasn’t quite finishing down the mound,” Kirby said. “I tried to slow myself down a little bit. Concentrate on my breath in between pitches and I thought it worked out pretty well.”

Servais turned the game over to his rested bullpen. The trio of Erik Swanson (7th), Andres Munoz (8th) and Paul Sewald (9th) worked the final three innings. They didn’t allow a baserunner. Sewald picked up his 20th save of the season. The Rangers had just one baserunner after the third inning.